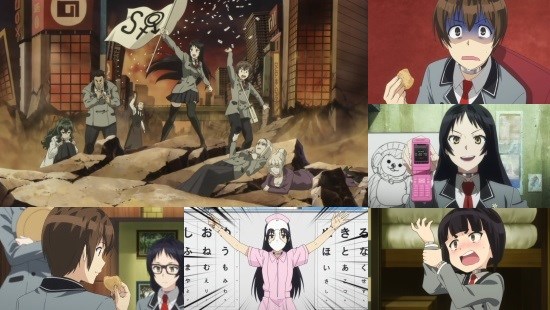 Set in the near future, Shimoneta focuses on a Japan in which the government has banned all forms of sexual expression, constantly monitoring the populace through personal electronic devices that will alert the them if anything of a sexual nature is expressed verbally or physically. On the way to his first day of school at the country's most morally upstanding establishment, Tanukichi has a run in with a terrorist known as Blue Snow, who uses sexuality and dirty language as a weapon to fight against the controlling establishment. After learning each other's real identities, Blue Snow enlists Tanukichi's help in forming a perverted terrorist organisation known as SOX in order to teach the masses sex education and rebel against the extreme forms of censorship imposed by their school and the government - all whilst leading a double life as upstanding members of their school's student council.

On face value Shimoneta has the rather interesting premise. A country under totalitarian rule, with rampant censorship laws and oppressed masses unable to properly express their own feelings and desires. This concept applied to the notion of sexual repression provides quite a unique spin on things, leading the way for various comedic situations. Most of these stem from the general student population being clueless about various aspects of relationships, and SOX's efforts to enlighten the masses. Shimoneta has pretty much only one option to handle this concept, given its subject matter, and that is to be as crass as possible regarding it. Shimoneta's core concept may be seen as interesting take on the youth of a nation uprising against an oppressive government regime and working tirelessly to not only overthrow the system but to change the general attitudes of the populace, but boil that away and the series is mainly about sex and the ability to swear and make dirty jokes. Shimoneta's main point of execution for its core concept is relying on the usage of innuendo, dirty jokes and swearing to achieve the goal of providing context to its theme.

Since Shimoneta takes place in a society where dirty words can't be said the dialogue is loaded with euphemisms and innuendo in place of actual words. All this is true save for one character; Blue Snow herself who, thanks to an old mobile phone left to her by her father, is capable of disabling the snooping capabilities of the government for a few minutes a day. Ayame abuses this to make a ton of sexual jokes, turning normal conversations into completely perverted affairs. This aspect of the show's comedy is rather hit and miss, given how some of the jokes she makes are pushing things a bit too far or are simply forced in order to make a joke. The saving grace of this is the reactions of Tanukichi who calls her out on how lame or terrible her jokes are. Apart from the language, Shimoneta also uses visual gags and situations to depict its comedy, mucg of which contain sexual imagery but exhibited from unique angles. Such examples include students being shown mating rituals but involving flies instead of humans with some really over the top voice-over playing over it, or having an artist draw lewd pictures using their mouth instead of their hands as drawing dirty images with hands triggers the surveillance of the government. Of course, the gag surrounding this also involves other places the pencil can be placed instead of the hand, courtesy of Blue Snow's dirty jokes.

This in turn leads into the other comedic aspect of Shimoneta; characters who have no idea of sexual content suddenly being exposed to it and not sure how to react or behave regarding it. This is also responsible for one of the creepier aspects of the show depending on your perspective. One of the female characters develops a crush on one of the male characters, and as they are usually pure and innocent they have no idea that the actions they are taking to display their “love” are bordering on the extreme. Given the context of the show and the themes it's going for it shows how dangerous it is for someone to be completely deprived of basic knowledge and how education and being open is important, but it's handled in a really heavy handed way. In a sense, this is an example of the main issue with the series as a whole - most of its jokes lack subtlety, instead going for the extreme to demonstrate it's comedies and themes, which is the show's biggest strength and also its greatest weakness. Your enjoyment of the show will depend on how okay you are with being constantly bombarded with dirty jokes and sexual content. If you can watch a full show based around them then there's a lot of fun to be had, but if you can only handle them up to a certain point then this may be one to approach with trepidation.

With regards to the jokes themselves, some are hit and miss but when some jokes hit they can give a lot of good laughs. Funimation Entertainment's dub in particular is actually one that follows up on the extremes of the show. Compared to its translated subtitled script, the dub has thrown in a lot more vulgar terms, sex references and swearing to push things a bit further, and in this show it works surprisingly well - you can tell the voice actors had a bit too much fun swearing during recording sessions. Another way Funimation have embraced the dirty aspect of the show is in one of their extras called "Moms watch Shimoneta", which is similar to the reaction videos you see on YouTube.  In this video, which lasts about ten minutes, some "moms" are shown clips of the show and comment on it giving their immediate reaction.  Some of the reactions on here are quite comedic and it shows how much fun Funimation are willing to have with the show.

Shimoneta is best watched and not taken seriously to add an extra level of enjoyment, and certainly seems like a good view point to have towards the show. Sure, the topics of government control and censorship in the show are interesting topics to be taken seriously, but given the focus on dirty jokes and sexual education it comes to a point where going in with an open mind about its filthy humor really helps with the viewing experience.

7
A rude and vulgar take on censorship and government control. A comedy for those with a dirty mind.