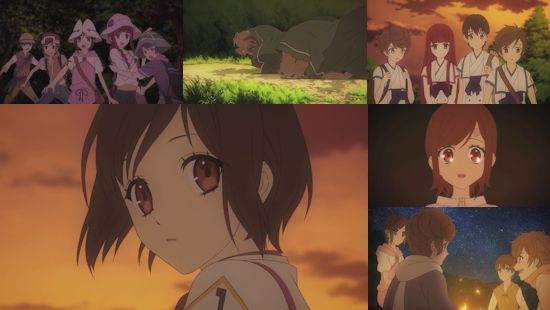 One thousand years in the future of mankind from our present day, things are radically different from the life we're used to - there are no iPhones, for starters.  It's clear that this far future has been caused by some major upheavals to humanity in the intervening period, but what was the cause of it all and is the future a utopia or dystopia?  While the opening scenes of Shin Sekai Yori give us some clues as to a turbulent near-future, it's going to take far longer for the entire story to reveal itself...

Based on a well-respected novel, a brief, bloody and decidedly present day view of our world gives way to a more tranquil and magical one.  We're introduced to this far future via a young girl named Saki who, having had her power of telekinesis blossom, undergoes a ritual which sets the stage for her taking up the next stage of her education.  This in turn allows her to rejoin her friends, all of which are also owners of such powers as they are taught how to use (and not abuse) the abilities bestowed upon them by nature.

Watching this unfold, the simple yet tranquil town within which this group plays, learns and chats seems to be idyllic in many ways, yet with restrictions upon leaving the town in place, discussions amongst the grown-ups which hint at darker undertones and creepy legends running through things, you can't shake the feeling that there are more sinister forces at work - forces which threaten to reveal themselves when the children are allowed to leave the town briefly for an educational camping trip which turns into more of an adventure than they could possibly imagine.

It's this dark undercurrent running through Shin Sekai Yori that is arguably one of the major triumphs of its early episodes - it isn't exactly subtle in prodding a finger in the direction of what some of the show's uncomfortable truths might be, and come episode four we're treated to a massive information dump encapsulating the thousand year history between now and then, but it's all part of a sufficiently compelling world to be a worthwhile endeavour.  Even where aspects of the show's direction are obvious, other parts of the equation are far more mysterious, with plenty still left unsaid or unexplained even five episodes in to serve as a longer-term hook for viewers.

The series so far also seems to be pretty strong in terms of characterisation - all of its young protagonists are well-rounded and notable without falling into any of the cliché pitfalls so common within anime, and for the most part their actions are entirely believable throughout, bringing together a heady mix of childish idealism, immature bullying and the first signs of underlying sexual tension within the group.  Visually, the show also manages to be striking, with a simple yet effective style and colour palette that suits the mood and tone of its world even if it does go a little overboard with its simplicity to the point of feeling downright cheap in episode five.

The one area where Shin Sekai Yori does seem to struggle is in the consistency of its pacing, which at times feels distinctly uneven - for every episode that is sharply delivered, another feels disjointed or otherwise slightly rushed, which in turn detracts from the story that the show is trying to deliver.  At this juncture this problem has by no means undermined the show to any significant degree, but it does serve to take some of the sheen from its surface amidst concerns that it might lose its way moving forward.

For now though Shin Sekai Yori is, if nothing else, the most fascinating series to be streaming to the UK this season - it's built a strong concept with plenty of aspects of interest that reveal themselves if you have the patience to sit through its careful attempts at world-building, and backs up that world with sufficiently strong and believable characters.  If it can smooth out its pacing and keep its story moving forward in fascinating ways, then this series could well live up to the hype as one of the autumn's must-watch series.

You can currently watch Shin Sekai Yori (From The New World) in streaming form right here at UK Anime Network!

8
Despite an occasionally slow and uneven start, there's reams of potential within the well-realised world of Shin Sekai Yori, which makes it well worth a watch so far.
COMMENT AND DISCUSS
blog comments powered by Disqus