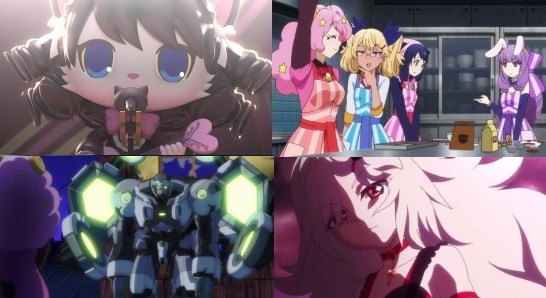 When you think of the creators of really good anime you think of Ghibli, of Madhouse, of Gainax. Sanrio... not so much.  In fact I dare say that the company that made a fortune making Hello Kitty would, let’s be honest, probably slip your mind entirely unless you happened to be a five year-old girl. Then a funny thing happened. Last year Sanrio decided to turn a mobile phone rhythm game into an anime aimed at a slightly older audience and, despite a whole host of nay-sayers (myself included), the resulting product, Show By Rock, turned out to be one of the best shows of the season. Thanks to the new Funimation/Crunchyroll alliance, we're now getting season two bang on time!

So, as quick recap for those who never saw the first season (which you should go check it out, as it’s really good) – Cyan is a first year high school girl who desperately wants to join her school's high school music club but is too shy to do so. One night whilst playing a mobile phone rhythm game she finds herself sucked through the phone into MIDI city, transformed into a cat girl and given a magical talking guitar. Here, she meets up with and joins the band Plasmagica with whom she must use the power of music to defeat an encroaching darkness.

When season two picks up, the girls of Plasmagica are still traversing the road to stardom, which is all the harder now that Cyan has returned home and their antagonistic rivals Critichrista have joined the Banded Rock Records label. Things are about to get a whole to worse too when their next live show is interrupted by a possessed singer who may be the Queen of Darkness and a band of ninjas from the future (called Ninjinriot) who have travelled back to stop the end of the world. Meanwhile, Cyan finds herself kidnapped by a large mecha who takes her back to MIDI city to help save it again.

First things first, the opening episode of this series is dark. Dark to a stunning level given how light and fun season one was, and there are certainly moments in there where you wonder if the creative team haven’t gotten hold of the script for another series by accident. Fortunately however the fun soon returns along with Cyan, and subsequent episodes feature a trip to outer space and trying to sell branded goods at a concert respectively, proving a return to form as the comedy and characters really start popping again. It’s good to see Moa get some more back-story too, which is nice as she was a little under-served last time around. Also for all the fan girls out there, yes, Shingan Crimsonz are still on-scene to provide comic relief, albeit thus far in a slightly reduced role (a good thing in my opinion as they often distracted from the main cast far too much last season).

Visually the show is still the same mixed bag it was before, which is perfectly fine in the case of this show. The traditional style animation is only ever really average but is good enough to do the job and it’s more than made up for when the series musical numbers jump into CG of a quality you’ll almost never get to see in TV animation. Yes the characters don’t have mouths and they aren’t trying to depict humans, but the chibified anthropomorphic character designs are super cute, well detailed and move brilliantly. The music itself is alright but it suffers a little from arriving in the season directly after Macross Delta came in and changed the rules on how good anime music can be - no series is really going be good in comparison when memories of that show are still so fresh!

In summary then, Show By Rock is back and it’s still pretty great too. So if you’re looking for a show about a band that doesn’t revolve around a high school club or even just a show where a cute dog girl is in love with a cute cat girl and they have comedy antics with a sheep and a bunny (and an egg) like some bizarre Zootopia sequel, then this could well be the show for you.

You can currently watch Show by Rock in streaming form on FunimationNow.

8
Plasmagica return for an encore performance!