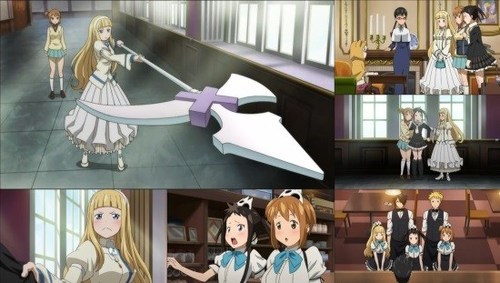 A spin-off from the original series, Soul Eater NOT revolves around the "NOT" class of the Death Weapon Meister Academy, the purpose of which is to help students overcome their obstacles in order to have a normal everyday life. The series focuses around three girls - Tsugumi, a girl who recently discovered she can transform into a halberd and needs help in order to control her weapon transformations; Meme, an incredibly forgetful girl with an attention span to match; and Anya, a former rich girl who ran away from home due to an obsessive yearning for an ordinary life and the everyday occurrences that come along with it. Soul Eater NOT takes place a year before the beginning of the original series.

While taking place within the same location as the regular series, things are vastly different from the original Soul Eater. For a start, there appears to be no emphasis on the characters training to fight corrupted humans or witches, focusing instead on the characters living ordinary lives. A whole episode is dedicated to the three girls taking up a part-time job in order to replace their weekly allowance that was stolen/squandered/misplaced. During moments like these you'd expect the characters get to know each other or interact with one another a bit more but their interactions with one another are brushed to the side as Tsugumi starts to take an interest in the school dorm's resident bully, a character who appeared as a supporting cast member in the original series. The focus on her seems to suggest the episode is being used merely as a way to give that character more back story.

The problem with this is that it starts to make the series feel really unfocused. The show started out with the premise that Tsugumi would be caught in a struggle between Meme and Anya regarding who gets to be Tsugumi's partner - adhering to the rules of the overall series, those in the NOT class are also grouped into Meister/Weapon teams with one weapon and one meister working together. However, the series then throws this out the window by having all three characters share a room together and take turns during their lessons, which is then used to split the characters up, leading the way to one of them being assaulted. Here, Soul Eater NOT does display some action, but since the characters in question aren't properly trained to fight in life or death situations these battles are more of a struggle until attrition sets in. Although the action itself does rather fit with the notion that the NOT class of characters are not fighters, if the series does decide to show more action it will need to make sure that it also shows characters going through training and developing skills otherwise it would be pointless to do so, as the action scenes present within the first three episodes are enough to show the skill level of the characters involved.

Beyond the action, Soul Eater NOT tries to play itself off as a slice of life show of sorts though, as stated earlier, the three main characters don't get enough focus or attention to make it anything special. The series quickly establishes Tsugumi as completely average and ordinary, weapon transforming aside, Meme is a character based around one joke that has grown quite thin already, and Anya is your typical rich girl/tsundere who gets embarrassed rather easily and tries to play it off. If not for the weapon transformations, character cameos and references to the supernatural (and the fact that the series is set in a world where there is a laughing sun and moon hanging in the air constantly) you'd completely forget that this was set in the same world as Soul Eater - Everything just feels so laid back and unmotivated, like several aspects of anime where cherry-picked and crammed together into one show without doing anything unique with them. It makes Soul Eater NOT feel like a typical run-of-the-mill comedy with some action scenes thrown in to keep audience attention.

Soul Eater NOT tries to pull off the balancing act of having comedy, action, character back story and slice of life rolled into one series. However, it doesn't excel in any of these. It doesn't particularly fail at any one of them either  admittedly, but each one just feels completely by the book and average. It's a decent enough show, but it's not living up to its potential.

Soul Eater NOT is available to view on-demand for subscribers to ANIMAX UK.

5
Soul Eater NOT may not be terrible, but it's also not anything special.
COMMENT AND DISCUSS
blog comments powered by Disqus