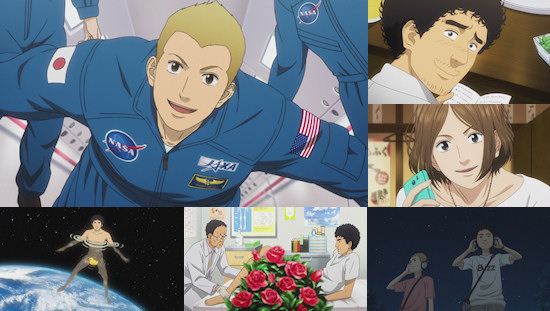 No matter how old you get, space (and the exploration of it) remains cool - even now that its golden age has died down, putting men on the moon and into orbit still remains one of the pinnacles of human endeavour, and I'm sure that as kids most of us have daydreamed of being astronauts for at least a moment or two before being brought back to down to Earth by reality.

For the Nanba brothers however, those dreams of space travel and reaching the moon (and beyond) have never quite faded - after a fateful night and what seems to be an encounter with a UFO during their formative years, both elder brother Mutta and younger brother Hibito set their sites firmly on exploring space.  While most kids would allow such dreams to fade as the years go by and the real world takes its toll on such ambitions, Space Brothers quickly allows us to fast forward to 2025 where we find that this dream has become reality - for one brother at least.

While Hibito is now training with NASA to take part in their missions in space, Mutta's life has taken a distinctly downward turn in the interim - despite his determination to lead the way for his older brother, he finds himself unemployed and scraping around for odd jobs in the automotive industry.  To all intents and purposes, it seems as if Mutta's dream is over - but is that really the case?  Some spur of the moment intervention from the Nanba sibling's mother reinvigorates Mutta, and sends him on the faltering first steps of what could be the journey of a lifetime.

After an opening that could almost have been penned by Nick Hornby as it ties the birth of our two brothers into major sporting events with very different outcomes for Japan, Space Brothers soon becomes an enjoyable, feel-good affair as Mutta sets his sights on passing JAXA's rigorous astronaut selection process.  While many series would set up our two siblings as deadly rivals with a deep-seated loathing of one another, Space Brothers does nothing of the sort - instead, Hibito and Mutta are as close as two brothers can be, with a friendly rivalry based largely on Mutta's determination to lead the way as the elder party of the two.

There's probably a rather hefty slice of disbelief required to imagine Mutta as an astronaut - simply the reason behind his dismissal from his job as a car designer would be enough to make him unemployable, and his clumsy, cack-handed way of doing things and quirky behaviour probably wouldn't help much either.  Luckily, these very same quirks also make Mutta rather lovable as a character - aside from the series cleverly spinning some of his foibles (particularly his bizarre attention to detail) as possible signs of genius when it comes to working in space, you can't help but want to cheer him on as he tackles the various obstacles before him with gusto, while the appearance of talented would-be female astronaut Serika Itou also throws a love interest angle into the mix.

In fact, that previous paragraph pretty much sums up the lure of Space Brothers at this juncture - the whole space exploration and astronaut training angle of the series sells itself, even if it is a lot of physical examinations and interviews at this stage, but simply cheering Mutta on to success and the chance to equal his brother's achievements makes for a surprisingly powerful story to draw us into the series.  Admittedly, Space Brothers never quite lives up to the entertainment value of its first episode and its hilarious moments of slapstick, but its character roster and scenario do enough to keep me watching and hold my interest even when the series isn't quite firing on all cylinders.

If your imagination has never been captured by the space race or exploration above and beyond our little ball of rock, then admittedly Space Brothers isn't going to be a series that will capture your heart - its reliance is very much upon the "cool factor" of becoming an astronaut, and without it this tale of two brothers following their dreams would almost certainly be a little dreary; replace "Space Brothers" with "Checkout Brothers" and you'll see what I mean.  Thankfully, space travel is still cool, and this allows Space Brothers to leverage likeable characters and feel-good drama to good effect - it'll need to add more strings to its bow to ensure that it's interesting from beginning to end, but for now what we have here is a unique and captivating little series that does its job admirably as a slice of vicarious dream fulfilment.

8
A light-hearted, feel-good series that leverages its core idea well enough to make for a fun viewing experience.
COMMENT AND DISCUSS
blog comments powered by Disqus