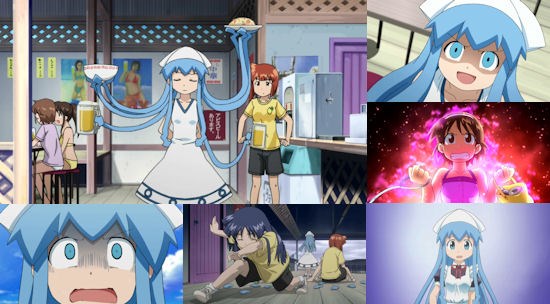 No matter how environmentally aware us pesky humans might be these days, it seems that we just can't put a stop to our polluting ways, not least when it comes to polluting the ocean with all kinds of junk and chemicals.  Well, it seems that at least one undersea creature has had enough, and decided that it's time to come to the surface to subjugate and teach them a lesson that they'll never forget.

If this sounds like the plot synopsis to some semi-serious ecologically aware and preaching anime then fear not, for the undersea creature in question isn't some kind of harbinger of doom at all - as much as she'd like to be an individual who brings terror to the human race she is in fact little more than a naive and actually rather cute little squid girl.  In fact, we're barely into the first episode at all before her dreams of conquest and domination fall flat, as we realise that Squid Girl not only has no idea of the size of the human populace, but also that her most fearsome and destructive attack only lands her running up a huge debt to a local beach-side restaurant.  The only way for her to pay this debt off is to start working at said restaurant under the watchful eyes of sisters Eiko and Chizuru Aizawa, giving plenty of scope to this almost literal fish out of water comedy tale with heavy slice of life leanings.

Given the show's concept, it's no surprise to see the early episodes of this series making the most of Squid Girl's lack of understanding of the modern world outside of the ocean, with a blend of naivety and misunderstandings laced with moments where Squid Girl reminds us of her desire for world domination however ill thought-out it might be.  This is backed up with a roster of characters that work pretty well in bringing out the best of the show's content, from those shop-owning sisters to their younger brother Takeru, and beyond to take in a local lifeguard and a friend of the shop owners who ends up become borderline obsessed with their new employee.  Although the series up to this point isn't hilarious from beginning to end, it does have its laugh out loud moments while also maintaining enough of a sense of fun to make each instalment enjoyable to watch, while zipping from one gag to the next to stop repetition from setting in most of the time.

Although we don't normally talk about the quality of Crunchyroll's subtitles in our streaming anime reviews (they tend to do the job well enough to not draw any attention to themselves), mention has to go here to their brave attempt to localise a series that involves a fair amount of effectively impossible to adequately translate wordplay; namely, Squid Girl's insistence on ending almost every sentence with the phrase "de geso".  For our English subtitles, this is replaced by squid references wherever possible - on occasion they even pop up where a "de geso" or other "ika" (squid in Japanese) reference is nowhere to be found, yet more often than not they actually add a certain something to an episode's comedy value, and on occasion they're squidding great.  If nothing else, it's nice to see translators going the extra mile instead of just ignoring that particular lingual oddity.

While some anime shows are difficult to discuss after just three episodes because they seem likely to veer off in a new direction at any moment, Squid Girl is contrarily a show that knows exactly what it wants to be from the very start - a gentle, fun and cute little comedy that won't tax your brain unnecessarily, making for some enjoyable and undemanding entertainment as a result.  If overly cutesy characters bring you out in a rash then Squid Girl's titular individual might leave you needing a doctor's appointment, but if you can live with that aspect of the show (and I'm still not entirely sure as to where a squid girl vomiting squid ink onto spaghetti falls on the cuteness scale) then this series so far has proved to be quite a decent dose of squidding fun.

7
If you're looking for some easy-going comedy, then this series looks like it's worth a few squid.
LATEST REVIEWS