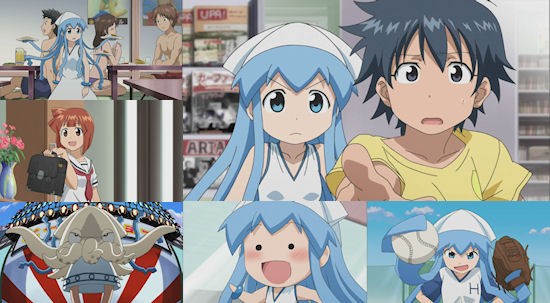 The first three episodes of Squid Girl might not have had us rolling around with laughter, but it did nonetheless entertain us with its blend of humour and cuteness, with most of the latter coming from the cluelessly adorable wannabe invader of humanity to which the title refers.

The remaining episodes of Squid Girl do little to change this state of affairs - there are odd laugh out loud moments, but the series broadly gets by on account of the fact that its cast of characters are simply a lot of fun to watch.  As we progress through the series this roster of characters is bolstered further, bringing Squid Girl some new friends to play with (even if one of them is actually convinced that Squid Girl is a threat to humanity) and a bunch of nutty American researchers who are labouring under the false notion that our titular character is actually an alien.

This cast of characters allows the series a broad playground to toy with as it continues to split its episodes into a handful of "sub-stories" - most of these stick to either using Squid Girl's lack of familiarity with human life as their prop (witness Squid Girl's fascination with umbrellas, for example), or simply leveraging one or more of those madcap characters interactions with Squid Girl for some slapstick comedy or similar.

That said, every so often the series throws us a curveball (and no, I don't mean a baseball episode, although there is inevitably one now that you mention it) by doing something a little different that only serves to underline how you've unwittingly grown to like the cast of this series - witness the life of "mini-Squid Girl" as Eiko's pet, which is unfeasibly cute before suddenly turning the tables on the viewer with an emotional ending, while the show's final episode similarly manages to create some tear-jerking scenes of its own as if to remind you what a whale (or should that be squid?) of a time you've been having.

All of this is presented in a polished and colourful fashion littered with nice little touches, right the way down to its closing credits which happily nod towards an element of the episode just gone by.  Even Crunchyroll's subtitles continue to do their part to add a layer of humour to the English translation, leveraging Squid Girl's trademark "de geso" and "ika" speech suffixes as an excuse to make plenty of "so bad they're good" squid-related puns.

This leaves Squid Girl to claim its place as a quiet comedy triumph of 2010 - it doesn't have the spunk of, say, Occult Academy or the intensely observational humour of some slice of life anime, but it nonetheless succeeds in being great fun to watch without ever overstaying its welcome.  As easy-going anime humour goes, it's tough to beat this offering.

8
Simple but effective and with the odd surprise thrown in to the mix, Squid Girl is an ink-redibly fun and saccharine sweet anime comedy that is well worth diving in to.
LATEST REVIEWS