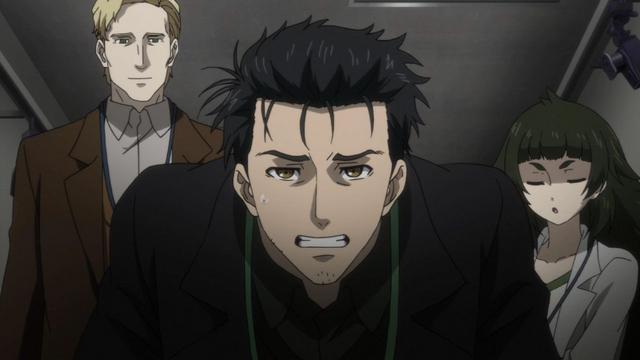 While the 0 moniker in a title is usually an indicator of a prequel that leads into the events of the original; Steins;Gate uses this denotation in order title its sequel that takes place in an alternate world line from where the final episodes of the first anime series and the original visual novel ended.

Spoiler warning. Within this review I'm going to talk rather openly about details from Steins;Gate. As this series is a direct sequel to Steins;Gate it is advised that the original Steins;Gate anime should be watched first before this series.

Steins;Gate 0 takes place on the beta world line in which Okabe Rintaro (Hyououin Kyoma) fails to save Makise Kurisu from being murdered at the Radio tower. Several months pass from the events of the first series, we see everyone get on with their lives in different ways. Most notably Okabe himself; he has dropped the Mad Scientist act and has now dedicated himself to leading a normal university life. This is until he meets former colleagues of Kurisu who are in Japan to present a seminar and present their new advanced AI system. Known as “Amadeus” this advanced system is a learning AI that is based on the memories of people stored within it. When Okabe is shown there is a version that is based on Kurisu he becomes a tester for the Amadeus system.

While the original Steins;Gate focused on Time Travel, it's plausibility and its uses Steins;Gate 0 focused more on AI, brain function and memories. While time travel is barely brought up in the sense of application, the effects of it on the mind are brought up. Along with this the effects of traumatic events on the mind are a heavy focus with Okabe being the main catalyst of this. In this series Okabe has given up his mad scientist persona, now acting as down to Earth as possible. While he no longer embellishes his abilities or intelligence we do still see him able to still hold his own in conversations relating to very technical jargon revolving around computers, brains and time travel. The big change to Okabe's character is bouts of PTSD he has. The effects of the Time Travel and guilt with the decision he made to stay in the beta line are having huge effects on him. Having panic attacks and experiencing trauma from time to time. These moments appear rather suddenly and add a sense of drama to things when they happen. Another big change to Okabe is that is more humble now and that he's more willing to ask for help. There are times when he realises he can't do things alone or he is too weak or clueless to do things by himself. This makes Okabe feel more rounded out as a character, sure it can't be denied that Kyoma's antics and the comedic dynamic it brings to the series is missed but this version of Okabe works well with the story they're setting up.

Within this story we see more of the supposed World War 3 that will at some point take place in this time line. With flashbacks from characters who are from the future showing how terrible the world is. This is used to establish more of what's at stake than what the previous show did. In the first show all of the information of what the world is like in the future after the war are all second hand information from Suzuha, here we actually see what the world is like and gives more cause to side with Suzuha in this show. In this show Suzuha is still trying to convince Okabe to give the attempt to save Kurisu one more chance. This causes arguments and tensions between the two. As well as this we see Suzuha interact more with Daru in a very odd relationship where they pretend to be siblings in front of others in order to not give away she is from the future. Thrown into the mix are some new characters, we see Mayuri's friends, one of which includes Daru's future wife and Suzuha's future mother. We see Kurisu appear as Amadeus along with Maho, a 21 year old student who was friends with Kurisu before her death.

With regards to the show itself. This first half of the series acts as the setting up phase. With introducing the new characters, establishing character motives and setting the stakes for what can happen if the time line isn't properly corrected. While there are a few moments of action and intrigue the main meat of this first half is character dialogues and moments in order to develop the relationships. We see Okabe come to terms with the events of the first series through conversations with Maho and Amadeus. We see the other characters interact with each other and start to realise that odd things are happening around them. While not being nearly as comedic or science orientated as the previous season it still has the same charming cast of characters to move things along. With regards to the English dub, it's still a very good standard with the cast reprising their roles. There is only one awkward scene in particular that involves a character speaking in English and other having to translate in Japanese. In the show they have the English voice actor speak Japanese which sounds a bit odd especially when at one point they abandon this and just have both characters start speaking English. Otherwise a very high quality dub with a fun script, some meme humour is thrown in here and there but fits the characters who say it.

Overall Steins;Gate 0 is a great follow up to the original show. Taking a more serious tone and showing the negative effects of certain actions from the previous series. A good set up for things to come