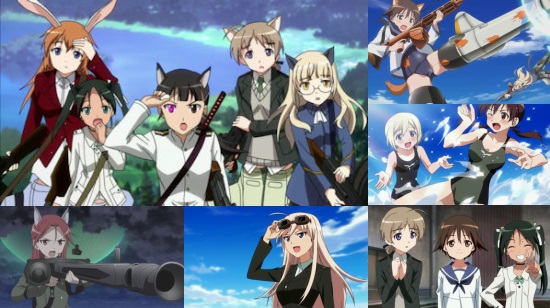 Having looked at the first few episodes of Strike Witches 2 when they first hit streaming service Crunchyroll, it's fair to say that this is the kind of anime which will divide opinion across pretty radical lines - some will love its cute yet fan service-laden bevy of girls smashed against an alternate reality world where flying magical girls fighting planes is the order of the day, while others will take one look at the character designs and unfathomable lack of skirts and trousers and click the "stop" button as fast as humanly possible, never to consider it again.

For those who managed to persevere however, Strike Witches 2 did prove itself to have something to offer, not least some wonderfully slick action scenes which far surpassed pretty much everything attempted by the first series of the show, tied up within some half-decent comedy and a sense of bounding cheerfulness that seemed at odds with the show's world at war scenario yet at least served to prevent the series from dropping into depressive melancholy.

As the series progresses from its scene-setting opening outings, the show's episodic template soon becomes pretty clear to see, more often than not starting off with some snatches (with every pun intended) of action, before moving on to focus on one or more of the characters which make up the 501st Joint Fighter Wing and building to some kind of mission or alien Neuroi attack which requires those characters to muster whatever ability or courage is necessary to defeat the enemy.  The success of these episodes therefore largely depends on how much you like each character (and the anime tropes they tend to fall into), but largely speaking each instalment is effective at delivering its emotional and story-telling payloads to make for a satisfying and entertaining experience.

Woven into this relatively self-contained format are broader plot points that serve to build us towards the show's grand finale, which once again centres around Yoshika Miyafuji and her Fuso comrade Mio Sakamoto; a spectacular closing episode that clearly had a lot of effort and money poured into it to create a stunning and occasionally breath-taking series of set pieces that will easily match anything else you'll see from television anime this year in terms of its visuals - one could argue it's worth the price of entry to enjoy this episode alone.

Of course, also sewn into the series are hefty lashings of fan service that you simply can't avoid, even though said scenes are also heavily censored by rays of light which just so happen to shine upon the relevant body parts even if it's the middle of the night.  Thankfully, most of the time such indulgences are slipped into the show reasonably unobtrusively (probably helped by the fact that most of the characters don't wear much in the first place), with the exception of episode seven which attaches itself entirely to following a bug which flies into the girl's underwear.  Needless to say, this instalment is as terrible as it is ridiculous, making it the only absolute black mark against the series.

If you can reach beyond those moments of lunacy that serve only to cater to the hardcore fans, and perhaps more importantly if you can manage to avoid trying to rationalise the entire concept of the series (trust me, you won't be able to), then the legacy that Strike Witches 2 leaves is one of a sense of fun punctuated with intense bursts of impressive action.  This clearly isn't a series for everyone to enjoy by any stretch of the imagination, but ignoring its reputation and focusing on the content itself finds us looking at an entertaining effort which boasts plenty of quality both visually and from its voice acting cast.  Whether its story and characters are enough to grab you is a far more personal question that is pivotal to your own enjoyment of the series, but if you can stomach its overall premise then you'd do well to at least give it a try.

7
The very nature of this series is divisive, but beyond its fan service roots resides a frequently entertaining and polished outing.
COMMENT AND DISCUSS
blog comments powered by Disqus