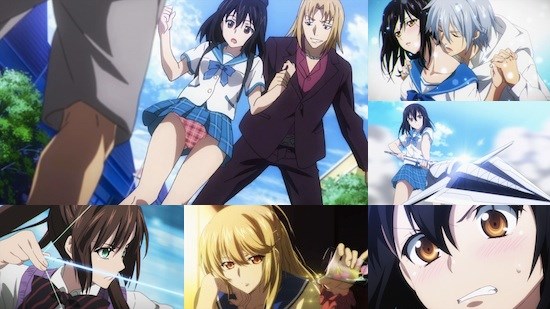 Itogami-jima, or the Demon District, is a man-made island off the coast of Japan on which humans and demons live side by side. One of the residents of the Demon District is our protagonist Akatsuki Kojou. Until three months ago Kojou was a normal high school student, but now he's a reluctant vampire (or D-type in Strike the Blood's nomenclature) with no recollection of how or why he turned. He's not just any vampire either, but the the Fourth Primogenitor - a legendarily strong vampire. Nevertheless, Kojou is determined to continue living as a normal human high school student, which of course is easier said than done when sexual arousal (known to occupy the majority of a typical anime high school boy's waking hours) sets off his vampiric powers. His predicament is only worsened by the attentions of middle school student Himegari Yukina, who marks her arrival into Kojou's life with several memorable, though inadvertent, flashes of her panties.

It soon transpires that Yukina is no mere middle school student, but a Sword Shamen from the mysterious Lion King Organisation. She has been sent to "observe" Kojou, with an eye towards eliminating him if he's deemed to be a threat. Demons wear "Demon Registration Bands" to mark themselves out from regular humans, and whole sections of the city are put into lockdown if a misuse of power is detected - a result, it seems, of the Demons nearing extinction and an uneasy pact between the three most powerful demons (The Primogenitors) and humanity. We are told that the Fourth Primogenitor is seen as a potential threat to the status quo.

That's the start of the first episode in a nutshell, and if it all sounds a bit by the numbers... well, that's because it is. By the time the second panty shot showed up I was well into eye rolling "here we go again" territory. Thankfully though there are hints later in the opening episode, and throughout the following two episodes, that this streaming series may just have something more to offer.

The fight scenes are thus far fairly fluid and satisfying, and in Yukina's very first fight we are introduced to what looks to be a central element of the forthcoming battles: the familiar. While their full nature has not yet been explored, familiars appear to be strong, summoned creatures possessed only by vampires. Overall the characters themselves are pretty likable, and on the face of it at least Kojou seems like a genuinely nice guy thrust into a difficult situation. The series slowly introduces more characters and drops one or two hints about their own potential bad guy stomping abilities, which will undoubtably be revealed later in the series, although anyone with a keen eye on the opening credits will see at least some of those coming a mile away. Speaking of bad guys, we don't yet know much about the evil-doers in Strike the Blood other than the fact they go around illegally killing demons and are seeking some sort of "prize".

Any J-Rock fan will find a good deal to like about the soundtrack - the opening in particular is a rather catchy little ear-worm. The voice acting is competent for the most part, and the cast playing the main characters all suit their roles well, although some of the peripheral characters are perhaps of more questionable quality. Strike the Blood is a well-animated series on the whole, but it certainly doesn't break any new ground in that department.

There's always a danger with this type of series that it will degenerate in to just another monster of the week show, but there's enough hinted at about the various character's backgrounds to mark Strike the Blood out as worth keeping an eye on. If you make it to the end of episode three there's no way you'll be able to resist rushing to watch the next episode though, as the series throws in a Madoka Magica-esque surprise. I just hope they follow through and make it stick, but I suspect someone will reach for the magic reset button in episode four.

You can currently watch Strike The Blood in streaming form on Crunchyroll.

6
Shows some promise, but needs to avoid the 'monster of the week' trap.
LATEST REVIEWS