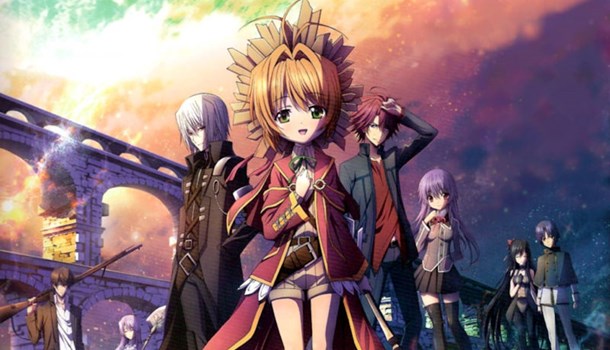 Anime does love its post-apocalyptic settings: The endless arid deserts; the colossal mutated insects; the peaceful idyllic villages. Erm wait, what was that last one again? One of this summer’s crop of streaming series, the somewhat daftly-titled Sunday Without God (or Kami-sama no Inai Nichiyōbi to give it its full Japanese title) is doing the apocalypse a little differently this year. But will it be a crowning glory, or a crowning smack round the head from a girl with a shovel?

Fifteen years ago the world was changed. No-one knows exactly why (not yet at least) but people stopped giving birth and people stopped dying. Alongside this strange change, a group of beings known as Gravekeepers appeared with one very special ability – when they bury the walking dead, they actually die. Ai is one such Gravekeeper, perhaps the youngest of her kind. She lives a peaceful life in a small village honing her profession since the death of her mother, the former Gravekeeper, through the somewhat morbid task of digging enough graves that she could have one for everyone in the village should they be required. Her quiet, happy and naive life is about to be shattered however, when a dark and mysterious man enters the village. A man with the same name as her father...

First things first, I genuinely have no idea where this series is heading. Normally by the time you get to three episodes in to a show the plot has at least started to unfold a little, but the first three episodes here are essentially a more-or-less self contained mini-arc which exist purely to set the scene for the rest of the series. It’s an interesting way to do things and it certainly means the series can’t be faulted for taking the time to establish its plot and characters! The story is told brilliantly, with the right amount of humour and some delicate tugging of heart strings in just the right places which also means that the barrage of exposition we’re presented with never feels too overwhelming. As the lead, Ai naturally gets a lot of screen time here and she proves to be a great person to lead the audience along to experience this world - she's cute, clumsy and passionate but never descends into that dark place of bunnies and rainbows called "saccharine". Aki Toyosaki (best known as Yui in K-ON!) does a great job as the voice for the character and injects her with some real emotion. The other characters presented are a little more ambiguous as, given events in the arc, it’s not clear yet which of them will wander off into the sunset and which (if any) will remain on for the series proper once the story gets going, although any or all of them would prove great travelling companions for Ai.  Personally, I have a soft spot for Scar the Gravekeeper, though worryingly she’ll happily list her former name as ‘murderer’.

Visually the series is one of the best-looking of the season. It’s not so much the detail or the fluidity of the animation (though both are excellent) as it is the use of lighting to generate much of the atmosphere and the careful use of the colour palette to tie everything together. The visuals actually remind me a lot of series like Clannad or Sola (although it's Madhouse on the duty here) with the richness of everything on-screen. The character designs are mostly not all that unique once you get past Ai herself (particularly her peculiar hat) which is probably the one weakness visually, but it can be forgiven when everything else just looks so good and the aforementioned use of light and colour really help to make the designs pop. You only have to look at the stills of the series to see how well this works.

This is a really good, strong start to the series and I have to say that I really like the way everything is being presented here. The first three episodes can make or break a series, especially when the season it’s airing in has as strong a line-up as this one does - it does a really good job of putting out enough information to get you ready for the plot proper to (presumably) start in the next batch of episodes and I really can’t wait to see where they go. The chances are we’ll get to see Ai discover what’s really going on in the world, but with this setting and the characters we’ve been presented with I’d be just as happy to sit back and watch Ai travel around the world making friends and dealing with smaller concerns for a while. I’m well and truly hooked.

You can currently watch Sunday Without God in streaming form on Crunchyroll.

8
A beautiful tale with a lot of heart.