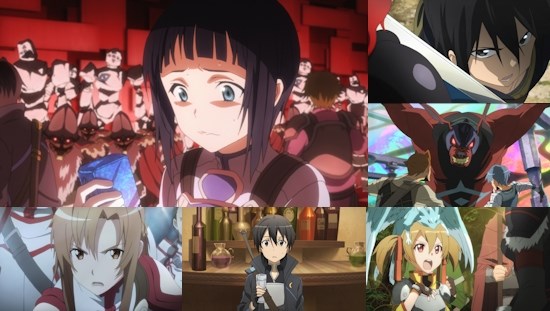 Hit anime are, to use the over-used analogy, like buses - you don't have any for years and then several of them show up at once. While Attack on Titan has been grabbing all of the plaudits and column inches this year we really shouldn't forget that last year's big hit, Sword Art Online, has also done a lot to indoctrinate newcomers into the wild world of anime fandom. Now, the series is coming to the UK on DVD and Blu-Ray, where it's likely to ensnare even more unwitting viewers.

As its title suggests, Sword Art Online is set in the virtual world provided by a brand-new video game - a massively multiplayer online role-playing game (MMORPG) that interfaces with a virtual reality device that allows the user to explore the game's world of Aincrad as if they were really there. Needless to say, such a prospect has proved to be a huge hit, and the game's initial run of 10,000 has sold out come launch day.

We're introduced to Aincrad and Sword Art Online via Kirito, one of the game's beta testers who naturally ensures that he's there to play the game on launch day. This, perhaps, proves to a mistake, as the opening day reveals a dark secret to Sword Art Online's world - this is no mere video game, but rather a nefarious plan crafted by the title's Game Master (no, not the late Sir Patrick Moore) to trap all 10,000 users within this virtual reality. If you or anyone else tries to remove the virtual reality headset, your brain will be instantly fried. If you die within Sword Art Online, your brain will be instantly fried. In other words, until the game is beaten and its hundred level dungeon completed, you'd best get used to the smell of sizzling cerebral matter - a cautionary tale of what happens when you port Dark Souls to the Oculus Rift, perhaps.

In the panic that ensues, Kirito is better placed than most to survive - his beta testing experience within the game gives him a head-start when it comes to setting himself up to level up and live within Sword Art Online's dangerous world. The sticking point, however, is that Kirito is a loner - a solo player in a world geared towards groups working in parties. Although Kirito seems to have the skills to pull it off, circumstances will require that he learn to get along with others, and thus these early episodes sees him making a number of friendships, some of which prove to be painful ones in a world where the possibility of death is never too far away.

The first thing that strikes you about this series is how ludicrous its core premise is - the prospect a game and virtual reality device being sold so widely yet proving to be so potentially lethal requires a significant suspension of disbelief - but if you're willing to move on past this there's no doubting that Sword Art Online's world-building is impeccable. As the seven episodes across this first volume progress, there's a real joy to be found in watching how the story weaves MMO game mechanics into this virtual reality, laying out the rules (and ways to subvert them) in an intelligent fashion that complements and feeds into the tales within its wider narrative.

These initial episodes of the series are also sufficiently varied as to be endlessly entertaining, drifting from comedic quests gone wrong through to more serious matters such as in-game murders and, of course, the dangers and psychological toll of exploring a world where you might meet your demise around any corner. The balance of a sense of fun and a feeling of peril are pulled off well across the entirety of these instalments, and it's certainly easy to get drawn into the world that the show has created - so much so that my plan to watch a couple of episodes quickly turned into watching this entire Blu-Ray in a single sitting!

The major negative aspect of the series which quickly presents itself over the course of this disc however is that it pushes rather too hard in the direction of male fantasy wish fulfilment - ever girl Kirito encounters falls head over heels for him in less than an episode, and his real life as something of a loner is quickly brushed aside in favour of showing how awesome he is when he's in Aincrad. Perhaps this imbalance will be resolved in future volumes, but somehow I doubt it, and watching him become this Mr. Darcy of the virtual world is actually inadvertently comical given how quickly every female member of the cast swoon and fawn over him.

Personally, we'd probably also suggest that the episodes on show here are a little too quick to burn through their material - moments which should leave a lasting impression or otherwise be poignant are given no time to linger or be dwelled upon, which reduces the impact of those moments considerably as we move right on to the next major plot point in the show's relentless march.

Sword Art Online's world-building efforts are complemented by a satisfying visual treatment - the series depicts its (usually brief) bursts of action well, and the overall look of the world and its virtual reality styling fit nicely into the plot. With eye-catching character designs and a high level of animation quality overall, we certainly have no criticisms here, and a clean and crisp Blu-Ray transfer certainly helps in delivering that sense of a quality production.

This Blu-Ray release (and, we believe, its DVD counterpart) is missing a couple of things, however. Most notably, the disc is missing any form of chapter point markers on the disk - hit the button to skip forward on your remote when the opening credits of an episode begin for example, and you'll be punched through to the start of the next episode rather than the end of those credits as you'd expect. This is, quite frankly, a massive omission from any anime release - we're led to believe this issue will also be present on the remaining volumes of the series, which is beyond disappointing. This release is also largely free of extras - understandable given the price point compared to the feature-rich North American release, but it may leave you casting envious glances across the pond, if only until you take a look inside your wallet and feel a little better about the value proposition of this UK release. To be honest, we're tempted to lop a point off our review score for the chapter marker issue alone, but we'll leave it be and let you make your own minds up as to its importance on this occasion.

If your interest resides within Sword Art Online's English dub, then you'll be pleased to hear that it's a good one - its casting seems pretty much spot-on, and the English cast nail down their roles with aplomb to ensure that this dub treatment fits like a glove. This volume's subtitles are all present and correct alongside a strong Japanese language track too, with only one or two occasions where subtitle timing or placement could have been a little more forgiving for viewers who can't read on-screen text at break-neck speed.

It certainly has its flaws in term of both content and delivery, but it's easy to see why Sword Art Online has captured the imaginations of so many - it takes an idea which is hardly unique in itself, but presents it in an engaging and entertaining way that makes full use of the concepts around which it bases itself to an impressive degree. Sword Art Online is certainly off to a very strong start, and it's left us hungry for more.

8
Get past the fact that its core premise is a little silly, and there's a lot of entertainment to be had from a show which builds and utilises its world in a compelling fashion.
LATEST REVIEWS