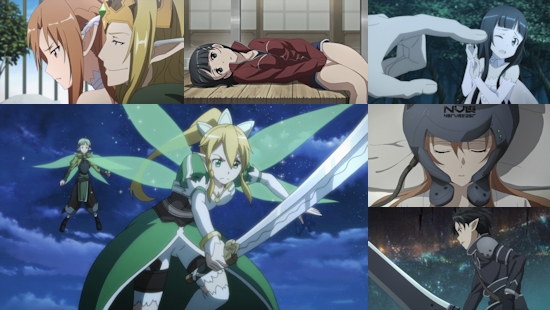 Kirito's Aincrad nightmare (although we're not entirely sure that he'd refer to it as that) is now over, ensuring that we return to reality for at least some of this third volume of Sword Art Online as it kicks off a brand new story arc.

Although our protagonist has now been returned to real life, his family and his doting (too doting, in fact) sister Sugu, the fallout from goings-on in Sword Art Online still reverberate through Kazuto's life - not least with regards to Asuna, who remains in a coma along with a few hundred other players who, for some reason, haven't awoken even after Sword Art Online's game came to an end. To make things worse, having tracked down Asuna and the real-life hospital in which he resides, Kazuto finds that his father plans to marry her off despite her comatose state to one of his business cohorts, Sugou Nobuyuki, in an early plot development that I would like to officially label "the most stupid thing ever".

Naturally upset by this turn of events, a chink of light seeps into Kazuto's world in the form of an in-game screenshot which seems to clearly show Asuna alive and well within its confines. Rather than Sword Art Online, this game is a new title named ALfheim Online, a successor to SAO created using that game's engine by the company that picked up the pieces from the discredited Argus - a company that also happens to be owned by Asuna's father, in another rather convenient plot development.

In spite of his previous experiences in Aincrad, Kazuto once again picks up his Kirito alter-ego to journey into ALheim Online to search for Asuna in the hope of reunited - a journey which introduces him to a whole new virtual world (and one which he can thankfully punch out of to return to reality at will) and some new companions, one of whom in particular might seem decidedly familiar if he were to just look at her personality a little harder...

Given its successful world building and mostly proficient story-telling, this second half of Sword Art Online has a tough act to follow, and its first episode certainly does a good job of nearly turning the entire endeavour into an utter train wreck. The appearance of Kazuto's little sister (not related by blood, as the series is as pains to point out) and her love for her brother is the kind of dreck you'd expect from a lesser series, while the setup for Asuna's current situation and the prospect of a comatose girl being married away by her father is laughable in the extreme. Put short, it's a beyond clumsy way to set up the scenario for the second half of the show, and for some it'll undermine the entire endeavour beyond repair.

If you're willing to overlook these substantial narrative roadblocks, things thankfully improve once we enter ALheim Online itself - admittedly, it does feel like the second-rate Sword Art Online knock-off that it effectively purports to be, but it still makes for a reasonably compelling world to explore, and the fact that Kirito can afford to die or leave the world to return to reality actually changes things up in some interesting ways rather than detracting from the in-game action. Throw in some considered mechanical changes within ALheim Online, and there's the core of a decent story beneath that decidedly sketchy exterior.

Beyond its story, Sword Art Online continues to be a polished affair, with a strong voice cast and some great animation which arguably drops off a little into this second half of the series but still delivers some great action scenes and pleasing aesthetics. This makes for a pleasing show to watch on the eyes that is well worth checking out on Blu-Ray if you can, not only for its video quality but also the presence of uncompressed LPCM audio, a step up from the compressed audio on Aniplex USA's significantly more expensive North American releases. Of course, this is offset by the lack of extras on this UK release, comprising of only some episode preview clips enclosed in this particular volume.

If you've enjoyed the first half of Sword Art Online then the good news is that there's more of the same on show here, broadly speaking - it's surrounded by some terrible plot points which serve as a catalyst to the events depicted here, but beyond that is a solid story that can't hope to scale the same heights or carry the same weight as its first story arc, but nonetheless has something to offer those sufficiently invested in its characters and concepts.

7
It starts out terribly, but beyond its clumsy attempt to set up a new story arc is a fair dose of the elements that make Sword Art Online enjoyable.
COMMENT AND DISCUSS
blog comments powered by Disqus