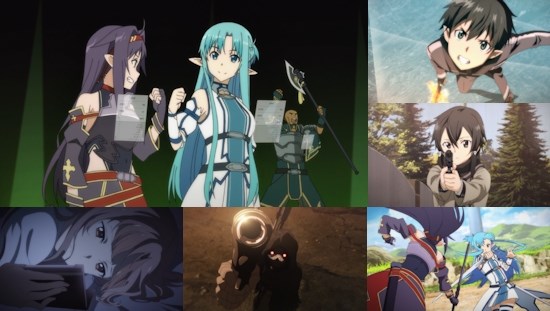 For all of the entertaining and popular shows that we cast our eyes over during the second half of 2014, the second season of Sword Art Online was undoubtedly the 400-pound gorilla amongst them - a show so popular that Crunchyroll's web site fell to its knees on a Saturday evening on several occasions under the sheer number of people trying to watch the latest episode as it aired.

When we last visited this sequel to cover its first six episodes, we were left feeling that the early efforts of Sword Art Online II were left wanting - it had some interesting ideas at its heart but was taking a long time to set things up so as to fully explore them, which in turn made it far less accessible than the swift and smartly delivered entry to its first series.

With all of that build-up out of the way however, the series was free to let loose within its newly imagined virtual reality online RPG of Gun Gale Online, with the much-vaunted Bullet of Bullets tournament about to get underway and Kirito working to track down the dangerous individual known only (and still hilariously to me) as "Death Gun", who is still at large and threatening to kill the strongest individual in that tournament in real-life in a crime that has baffled those involved.

What's more, a virtual face-to-face meeting with Death Gun has brought a horrifying truth upon Kirito, that being that the malicious individual in question is no stranger to our protagonist, which in turn reveals that there are still long-standing scars to Kirito's psyche from his time trapped within Sword Art Online. It's this realisation that actually brings Kirito closer to Sinon, who may be an expert sniper within Gun Gale Online but is also a girl both simultaneously trying to escape from and resolve her own deep-seated psychological issues brought about by past trauma. It's a problem that both of them need to push aside simply to ensure their own survival as the Bullet of Bullets begins and Death Gun begins to make his presence felt.

As per its first season, Sword Art Online II's first story arc is really at its best when the proverbial rubber hits the road - although it never hits the heights of the first series, the tournament around which this story revolves is wonderfully realised and brings with it a decent sense of tension, all presented in a well-paced package to serve as a compelling whole. It's a shame, then, that this arc stumbles at its climax - much like its Fairy Dance arc takes a strong female character in Asuna and reduces her to a "kidnapped princess", so Gun Gale Online reduces Sinon's interesting character to a damsel in distress who only Kirito can save on two occasions. It's ultimately a waste of a strong character, and undoes a lot of the good work this arc does in building up its threat and the response to it within its virtual reality setting.

However, after a clumsily edited recap episode - episode 14.5 - and a brief filler interlude the show's second half returns with the Mother's Rosario arc, and a tale notable because it pushes Kirito to the sidelines and instead focuses upon Asuna as the main character. In short, this is a stroke of simple genius - it allows the series to explore her own domestic circumstances and difficulties (born in no small part from her time in Sword Art Online), and progresses into an incredibly heart-wrenching finale that is easily the show's greatest achievement at this juncture.

This all comes via a mysterious character within Aincrad's virtual world, who has appeared to challenge all-comers in one-on-one combat to test their skills and is beating all and sundry with ease. When even Kirito falls in such a skirmish, the interest of Asuna and their mutual friends is also piqued, and when Asuna herself takes on this skilled fighter she's quickly swept up in an adventure that not only proves memorable, but also leads her to realisations as to how to proceed with her own life outside of the virtual reality that she loves.

It's really difficult to overstate just how well every element of this story arc pans out - Asuna's troubles are palpably believable, and her relationship with the mysterious and improbably talented Yuuki is superbly realised and takes the show's setting in all sorts of fascinating and occasionally thought-provoking directions, while also providing a very different tone and outlook to the rest of the series without losing its occasional moments of grandiose action or slithers of humour. Even if you're one of those who has vocally pooh-poohed the efforts of Sword Art Online at every turn, this is a standalone story that is potentially worth checking out provided you have at least a cursory knowledge of the show's setting. Yes, it really is that good, but we can't elucidate further without spoiling much of what makes the story's progression work so well.

Taken as a whole, Sword Art Online II is certainly a mixed bag - the Gun Gale Online arc is entertaining and has its moments but never reaches the heights of the story which kicked off the franchise, while Mother's Rosario feels fresh, different and thoughtful in a way which the series has only fleeting proved capable of previously. Its second half might not fit into the standard template of what has made this series so wildly successful, but it's certainly something I'd love to see it attempt more of in future (assuming its light novels continue and enjoy further anime adaptations) alongside its more traditional action packed, eye-catchingly animated fare. Such is the power of that second story and what it attempts (and almost entirely succeeds in), that it makes this a series well-worth watching - a given for existing fans of Sword Art Online, but potentially even one that newcomers might want to take a look at from episode fifteen onwards.

8
Gun Gale Online is a flawed but entertaining story, eclipsed by Mother's Rosario and the pinnacle of Sword Art Online's story-telling so far.
LATEST REVIEWS