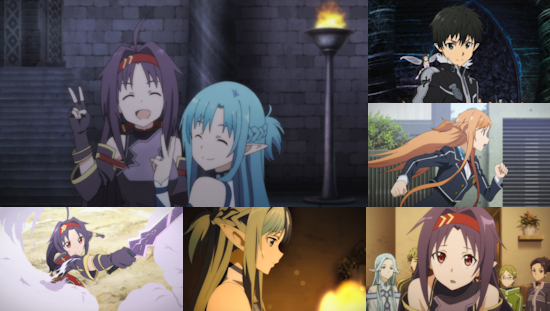 The start of the Mother's Rosario arc in the previous volume of Sword Art Online II saw our focus shifting to Asuna, as she finds herself faced with some real hardships regarding her domestic life and the impact it may have on her future. However, all of her concerns are about to pale into insignificance compared to the events in which she's swept up as this second season comes to a climax.

Not that things seem too troubling as this batch of episodes begins - having suitably impressed the unbeatable swordswoman known as "Zekken", Asuna finds herself with an unexpected proposition - to join a very small but powerful group as they aim to defeat ALfheim Online's next boss. Normally such an undertaking would see a massive party assembled, but this group - a guild known as the Sleeping Knights - are determined to have their names etched into the game's history, which they can only achieve by beating the box as a single group.

Impressed by their passion and commitment - not to mention the fact that they seem like a decent bunch - Asuna agrees to temporarily join their party and add her considerable skills and knowledge to the group. Thus, the race is on to be the first to defeat the boss - a prospect made all the more difficult by the emergence of powerful rival groups who are themselves hell-bent on being first to prove their worth. If this boss battle is difficult it's as of nothing compared to what is to come, as Asuna learns the truth about Yuuki, just how she's honed her abilities to such a degree within an online world and what that means for their friendship.

Although this final volume of the series does contain all of the familiar moments that fans of the show will lap up - RPG style strategising and some fantastic action scenes in the build-up and pay-off of the big boss battle - this story arc is otherwise a side you've never really seen from Sword Art Online before. This isn't just on account of Kirito being largely (although not entirely) sidelined, although it's a big part of what makes this arc feel refreshing - what really makes Mother's Rosario stand out is the sheer weight of emotion that it carries with it. From Asuna's troubles through to Yuuki's plight, there's a lot for the story to get its teeth into on a dramatic level, and the pay-off is absolutely huge - set your phone to silent and lock yourself away for the duration of the final two episodes in particular, you won't want anyone to see or hear you in the state this story arc will leave you in. There's also something truly pleasing about the vision this arc in particular has about the virtual reality technology which is a cornerstone of Sword Art Online, positing its use as an aid in medical care in a way which reaches far beyond its "oh no, I'm trapped in a video game" origins.

Visually, this volume of the series doesn't need to work quite as hard as previous arcs in terms of big action set pieces, but production values remain high and the show continues to look great, and (of course) well worth of watching via its Blu-ray treatment. Subtitles are all present and correct here, although as per two of the three previous volumes episode title subtitles are subtly mistimed such that they don't appear if you skip the opening credits; an issue which also affects timing of the first line of dialogue for one solitary episode. Still, this isn't a show-stopping issue, and the English dub for the series continues to be pretty decent here.

This final instalment of Sword Art Online II also continues Anime Limited's good work from previous volumes with the inclusion of a high quality art book packed with character design sheets, episode outlines and a handful of interviews amongst other key visuals and background art. It's a decidedly nice addition contained within a beautifully shiny rigid case which appeals to our magpie-like tendencies. All in all, it's a great presentation for fans of the show - and yes, all four volumes do fit properly into the Collector's Edition box that came with part one, in case you're worried about that!

As much as I'm a fan of a lot of what Sword Art Online has done across its two seasons, for me Mother's Rosario stands alone as a tantalising glimpse of the franchise's ability to deliver beyond its core fantasy-action trappings - it's a story rich with emotion and sadness, and with dilemmas and developments that work in no small part thanks to solid character writing and a sense of humanity fragility that will resonate with anybody. This maybe isn't the kind of story we should expect from this series on a regular basis, but it does prove that there's far more to Reki Kawahara's story-telling arsenal than had been previously reveal in this anime adaptation, and it proves to be the harrowing yet strangely beautiful pinnacle of the series.

9
Mother's Rosario is a very different kind of Sword Art Online story, and it's both refreshing and immensely powerful in what it does.
COMMENT AND DISCUSS
blog comments powered by Disqus