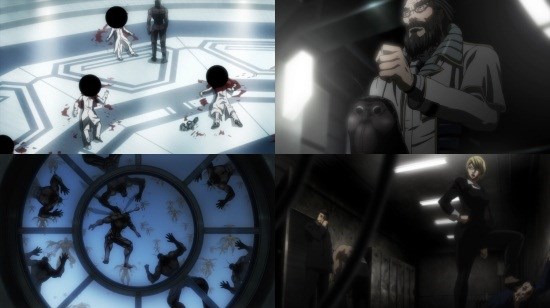 Terraformars – cock-roach-es in dis-guise! (Sorry, I’ll stop doing that now I promise). Name punning aside (and there could be a lot of punning as it’s a really daft name), Terraformars is not the latest Transformers cartoon, but rather an aspiring hard-edged adult sci-fi action series pitting the world against a race of humanoid cockroaches. It’s airing on Crunchyroll this season and has been talked up as one of the most anticipated non-sequel shows for this season, so let’s dig out some bug spray and go huntin’!

Five hundred years ago, mankind attempted to colonise Mars by using a form of terraforming (the series doesn’t tell you this as such but its heavily inferred by the title end everyone keeps referencing that things have changed in 500 years). Now, mankind would like to take advantage of this but there’s a slight issue - a race of humanoid cockroaches mankind has chosen to call Terraformars attack any ship and crew sent to Mars and tear them apart. The insects are colossally strong, tough and are revealing themselves to be more and more intelligent. Worse, the survivors of these ships have brought a new virus back from Mars which is ravaging the Earth’s population, so another team must head back to Mars in search of a cure. Their big hope? A group altered by surgery to have superhuman strength and speed.

In terms of characters, we are introduced to a small selection of Earth's mightiest bug-stompers - however, since the most memorable thing any of our ostensible leads do in the course of three episodes is wet themselves and get eaten by a bear (okay, so that was pretty memorable I’ll give you that), we don’t really get any sense of who they are and frankly I had to look online to remember any of their names. At this stage they’re literally just people to react to other people getting ripped apart by giant bugs. Any and all back story is clearly going to be unveiled later on, so all you can really say is that the presumed leading man is called Akari and apparently has some secret genetic reason to be better than anyone else at the task at hand, and the leading lady is a blonde, large-bosomed woman called Michelle. Oh, and she wears glasses because why fulfil one fetish when you can cram three in at once.

So, there's interesting set-up here that is weak on characters, but this is a big super-violent action series so this thing just has to look great and redo Starship Troopers, right? Well, in theory yes, but certainly not in the version we’re currently getting. For starters, a decision has been made to do the series in a really dull, washed-out colour palette which makes everything look dreary and bland and in some scenes practically black and white. Combined with character designs that look reasonable in stills but decidedly subpar when you seen them moving (the animation budget clearly wasn’t nearly enough for the series) and you have something that would have looked pretty naff ten years ago.

Then again, I could be wrong because maybe all the good animation is hidden behind the parts of the screen that keep going black. Yes, you guessed it, this series has been butchered by censorship - and before you go looking there’s no uncensored version airing in Japan as far as I can tell so you’re stuck with the Crunchyroll version for the time being. This is one of the worst examples of censorship I’ve seen in a long time, with colossal amounts of the screen just black. Frankly, in combination with the lack of character development it renders watching the series in this state pretty pointless. To their credit Crunchyroll have said they will be showing an uncensored version but this will be ‘at a later date’, so you can probably read this as ‘after all the Japanese Blu-rays have come out’.

In summary then, the best thing you can do if you're interested in this series is wait. There are tonnes of new shows out at the moment that look promising so there’s really no point at watching what’s practically a radio broadcast at this stage. This series is the kind that’s all but assured a Western licence at some point, so my advice is to hold off until then - or at least until Crunchyroll stream those uncensored episodes - as at the moment it’s impossible to tell if there’s anything worth your time here.

You can currently watch TERRAFORMARS in streaming form on Crunchyroll.

2
There might be a good show here, but you'll have to wait for the uncensored version to find out.