Tale of the Princess Kaguya, The (Theatrical screening) 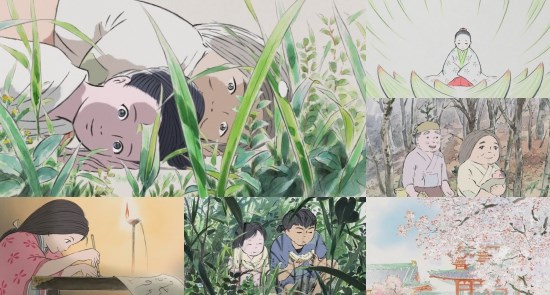 Tale of the Princess Kaguya, The (Theatrical screening)

It's hard to imagine an anime industry which no longer has Studio Ghibli producing quality feature films at its forefront, yet here we are in early 2015 faced with that now very likely possibility. Hayao Miyazaki's retirement has been followed by disappointing financial returns (by Ghibli standards) on their subsequent films, and with Hiromasa Yonebayashi now also leaving the studio and no active works in production, it's beginning to look like this is the end of the line for the world-famous animation studio.

Before that possibility really looms large for us in the UK however, we have two more feature films from the studio to enjoy - what may prove to be their final movie in When Marnie Was There, and prior to that this Isao Takahata film, his first in well over a decade. The Tale of the Princess Kaguya was one story that Miyazaki left as part of a "hit list" of classic tales the studio would be well-advised to adapt for the big screen prior departure - and what do you know, he wasn't wrong.

Based on folktale The Tale of the Bamboo Cutter, we begin our story with a humble bamboo cutter named Sanuki no Miyatsuko, who happens upon a glowing, shining bamboo shoot as he goes about his daily business. Amazed yet unperturbed by this odd sight, he proceeds to cut down this shoot only to find a tiny doll-like girl inside. Even more astonished by this turn of events, he rushes home to show the girl to his wife, only to see this miniature figure grow into a human child - indeed, she continues to grow at an unprecedented rate before the eyes of her adoptive parents over the years which follow.

Although this girl - nicknamed "Little Bamboo" on account of the rate of her growth - comes to love her rural surroundings, making friends and revelling the adventure comes from her closeness of nature, her father is convinced that his adopted daughter is a gift from the heavens and thus must be elevated to her rightful place as royalty in the capital city; a belief solidified by the same bamboo shoot which gave birth to the "princess" (as her parents call her) also providing this family with opulent clothing and vast quantities of money for the girl.

Thus, when he deems the time to be right, Sanuki no Miyatsuko whisks his daughter off to the capital where she's provided with a lavish residence and an education designed to guide her towards the member of royalty which she is surely destined to become. Of course, this comes as a culture shock for the young girl, as her simple joys of living amongst the fields and playing with her friends is replaced with talk of what it means to be a lady - of being demure, subservient, and ultimately preparing herself to marry into royalty and take what is assumed to be her rightful place in the world. Of course, you can probably figure out how that turns out, but even then you might not be able to predict the ultimately course that the film follows through to its conclusion...

It's hard not to talk about any Studio Ghibli film without gravitating immediately towards its visuals, and it's certainly a topic that's impossible to avoid up-front in the case of The Tale of the Princess Kaguya. If you're used to the luscious, detailed visuals of much of the studio's output, you might find yourself rather shocked by the early running of this film - what is this simple-looking, unusual animation style? Isn't it a bit, well, ugly? Don't be fooled however - this is another fantastic Ghibli production, albeit in a different sense than you might be used to.

Once you get used to the unusual aesthetic, its charms slowly but surely become clear - it may look simplistic at first, but the brush and pencil style of the film (in fact created entirely digitally) actually holds the key to its fluid and expressive nature, which allows it to evoke the emotions of its story in a far more powerful way than the studio's trademark style would have been capable of. The movement of characters in particular is absolutely perfect - always nuanced and believable, and leveraged in the name of comedy one moment or conveying a character's emotional state the next - while the fluidity of the film also extends to its surroundings, as evidenced by a powerful scene which sees Princess Kaguya escaping her home-cum-prison via perhaps the most evocative visuals that the studio has ever accomplished.

Of course, there's more to this movie than its accomplished animation, and the film itself presents a wonderful story. It can be argued that the film runs a little too long and drags its heels in one or two places, but Kaguya's overarching story is undeniably engaging, with plenty of variety to its focus thanks to its changes in scenery and cast throughout the film, and a core narrative which is as timeless as you might expect of a folk tale. The flow of the story is particularly appealing because it isn't a simple tale of good and bad, right or wrong - it may be tempting to see Kaguya's father as the villain, driven by greed and a desire for worldly possessions, but in fact he's simply misguided (and blinkered as a result) in his drive to do what he sees as best for the daughter he dotes on. It's exactly the kind of charming, measured fare that has made Studio Ghibli the powerhouse it is, and couple its animation style with its story and it's no wonder the film landed itself an Oscar nomination.

Having seen the film with both English and Japanese voice casts at this point, it can be said that both sets of actors do a fine job of portraying their given characters - we'd perhaps tend towards the original Japanese as offering a slightly more dynamic take on the film's comedy and drama, but you'll be equally well-served regardless of which language you watch the film in.

If The Tale of the Princess Kaguya proves to be Isao Takahata's Studio Ghibli swansong, then what a note to finish on - its unique visual style sets it apart from much of the studio's output in a way which may not be immediately appealing to all, but it's an aesthetic that more than proves its worth over the running time of the film. Thankfully, this is backed up by a movie itself that is exactly what you'd expect of a film of this nature - charming, touching and funny in equal measure, and delivered with a keen eye and measured approach to ensure that its impact upon the viewer is maximised, leaving our only complaint to be the aforementioned feeling that perhaps a little more fat could have been trimmed around the edges of parts of the film to reduce its running time a tad.

They say that you don't know what you've got until it's gone - although Studio Ghibli's life as a production studio is still up in the air, The Tale of the Princess Kaguya is already a substantial reminder of the kind of artistry we'll lose in both animation and story-telling terms if the studio does indeed decide to close its doors, and as such this is a film that really shouldn't be missed.

The Tale of the Princess Kaguya opens in UK cinemas from Friday, March 20th 2015