Tales of Vesperia: The First Strike 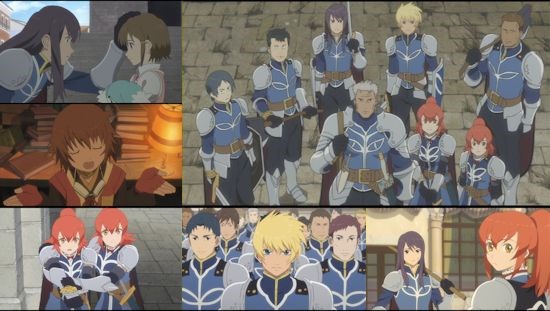 Tales of Vesperia: The First Strike

I have to confess as a precursor to this review that I'm really not at all familiar with the "Tales" series of RPG games, a lack of familiarity which extends out to perhaps one of the most popular iterations of the franchise, Tales of Vesperia.  Although that would seem to put me a natural disadvantage when it comes to reviewing this movie, The First Strike sets itself up very much as a prequel to the game, leaving me hopeful that I can enjoy it regardless of my status as a newcomer to its universe.

The film certainly begins with a brief touch of handholding, explaining the origin of the primeval power known as "aer" within its world, and the cores of energy named "blastia" which can be used to power magic and the like in an intriguing blend of science and sorcery.  With that out of the way, we jump into the heat of the action, as a fast-paced military operation headed by a team of Imperial soldiers who will be recognisable to anyone who has had any prior contact with Tales of Vesperia takes place through to a suitably grandiose finale.

With the forests seemingly dying, decidedly unsavoury monsters roaming everywhere in every greater numbers and the local townspeople leaving in droves, something is clearly amiss, but could it be related to the extreme and abnormal concentrations of aer in the area?

After all-but pinpointing the cause of the town's current malaise, The First Strike then takes an incredibly long time actually doing anything about it - to call its build-up to the final battle to restore normality slow going would be an understatement.  At times, this slow but steady progress works okay - the main quartet of characters have a superb dynamic when they're all together, and there are some decent and occasionally tense action scenes as the current threat moves closer to the town being protected - but for the most part it feels pointlessly slow.  We know exactly what the problem is almost straight away, so why does it take so long to get to the core of fixing it?  Backed up by some more substantial politics or human drama, this might be forgivable, but on both counts The First Strike is sorely lacking, and even some of the better character-centric plot points such as Flynn's past and the fate of his father don't add all that much to proceedings.  To make things worse, the major twist at the end of it all is conversely given no time at all to breathe, which effectively strangles any life out of what might have been a cunning and memorable finale.

On the positive side, The First Strike is pretty solidly animated for the most part, with Production IG (who also handled cut scenes for the title) succeeding in making the most of Vesperia's distinctive character designs and given them plenty of opportunities to be expressive in terms of facial expressions and body language.  The film's action scenes might not be the most jaw-dropping you've ever seen (and characters have a nasty habit of just standing around while a comrade gets attacked or torn to shreds!) but they're certainly functional and convey what's going on to create some decent scenes, particularly towards the tail-end of the movie.  The movie's Japanese audio is solid, and almost matched by a competent English dub, and a pretty good video transfer means that one single line of missing subtitles was our only minor gripe with the DVD release that landed on our desk.

Perhaps with more background knowledge of the trials and tribulations to come as a result of playing the game, The First Strike might prove to be a more interesting movie - it could be that it's ripe with deeply layered pointers to the subsequent game that fly over my head - but stripped of that knowledge (and as a prequel, it really should expect viewers to have no prior knowledge of what happens later) it's a mediocre film at best.  Its melding of science and magic seems compelling, and it has characters that you'll warm to (or love to hate) instantly - if only it did a little more with these elements to create something more enjoyable as a result.

As it is however, Tales of Vesperia: The First Strike is a poster child for mediocrity, as a film that doesn't get anything wrong per se but does little to nothing to make you sit up and take notice by the same token.  Fans of Vesperia's world and characters will get a kick out of spending some more time with their favourites, but if you're eyeing up The First Strike as an entry point into this particular universe then it's more likely to put you off than convince you to plunge into the RPG which inspired it.

English and Japanese 5.1 audio with English subtitles.  Extras consist of promotional videos, a US trailer for the film, and a picture gallery.

6
It has potential in its characters and concept, but does very little with them over the course of this film to make for a disappointly mediocre movie.
LATEST REVIEWS