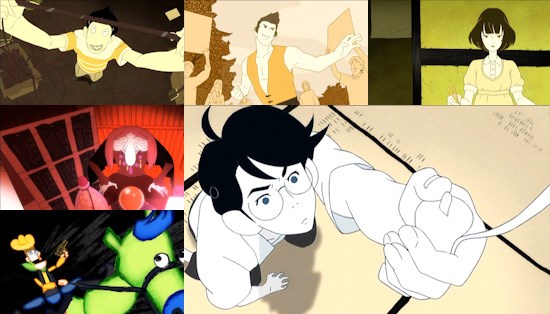 Of all the pressures of modern life, perhaps the most keenly felt from the earliest age is the constant urge to find "happiness" - thanks to the media, literature and the like, this has become an idealised concept of bliss that usually revolves around serving as a graceful social butterfly while engaging in a perfect romance with your dream partner.

It's this goal to find happiness that pushes the unnamed protagonist of The Tatami Galaxy forward throughout this series - we join him as he begins to embark upon university life, determined to grasp for himself a "rose-coloured" campus existence to set him on the path to domestic bliss.  But exactly how should he go about gaining the lifestyle he desires?  The obvious answer is to join one of the university's many clubs and organisations - but which one?  This seemingly simple decision is both far more important than we could possible imagine and simultaneously completely irrelevant to our protagonist's future.

That conflicting statement above goes to the heart of why The Tatami Galaxy is so difficult to write about without spoiling the series and its progression for potential viewers.  On the surface, what we have here is a simple, episodic and occasionally arc-based series - each week, we see our protagonist join a different university club or society, and each week we see him fall in with the devilish (in both behaviour and appearance) Ozu, who derails the search for a wonderful campus life with his pranks and deception.  Then there's the love interest for our "hero" - a straight-talking, frank but ultimately friendly girl named Akashi, who proves to be a perpetual missed opportunity as we're instead sidetracked by other girls or Ozu's plotting.

While each episode of the series initially seems self-contained before the protagonist's world "resets" at the end of an instalment or story arc, this proves to be not quite true as The Tatami Galaxy progresses - elements of one tale find themselves cropping up in the next, albeit slightly altered perhaps, and the further you progress into the series the more immaculately woven everything proves to be.  Moments which seemed pointlessly surreal or bizarre suddenly take on a new meaning, while minor events that are virtually glossed over in one story suddenly become vital in the next.  To call the progression of the show and its characters satisfying would be an understatement - this is a series that almost begs you to view it twice to fully appreciate the mastery of its craft and all of the subtleties hidden away beneath its exterior.

What an exterior it is too - from the very outset, The Tatami Galaxy strikes you with animation that seems simplistic and almost childish; a first impression that belies its fluidity against a backdrop of colour that gives each episode, each scene at times, a unique feel that fits perfectly within its context.  Also of note is the way that the series as a whole is delivered - rather than the slow, deliberate delivery of dialogue as per most anime, The Tatami Galaxy throws its monologues, diatribes and discussion at you at a break-neck speed with barely time to breathe, and certainly no time to take your eyes away from the screen for a split second.  Given the show's place as a subtitle-only release, only speed readers will be able to fully enjoy and comprehend the show's verbal dalliances, occasionally making it a real struggle to keep up that is, quite simply, hard work.  This is actually rather a shame, as the show's dialogue is frequently sparkling, full of sharp comedy, witty comebacks and one-liners amidst the dense sea of words that flit before your eyes and past your ears.

If you can keep up with the subtitles throughout however, you're in for a real treat. Despite constantly appearing to reboot its world this is no "Endless Eight", instead proving to be an intelligently written show that defies pigeon-holing into any particular genre - sure, it's a slice of life comedy at its core, but so meticulously inter-woven and occasionally self-referential are the elements within each episode that it seems almost an insult to describe it as such, especially when its finale provides such beautiful and satisfying closure to the dilemma it poses us right at the very start.  Ultimately, this is a tale of friendship and "living for the moment", and it's the moral to a series that's more than backed up by the stories and incidents it provides us to live through vicariously.

Although its lighting-fast subtitles will be off-putting to some, this is otherwise a great effort from Beez Entertainment - a beautifully packed, three disc complete series release with gorgeous artwork and the notable inclusion of some additional bonus mini-episodes as well as an interview with the show's screenwriters.  The only black mark upon this is the presence of garbled audio in episode six - it isn't enough to ruin that episode, but the drop in audio quality from the rest of the series makes it stand out like a sore thumb in comparison.

As it's looking increasingly likely that this is going to be the final brand-new release from Beez Entertainment, I can't think of a better swansong for the company - an arguably risky, subtitle-only release for an award-winning series unavailable in North America that might not be the most accessible anime we've ever seen, but one that is nonetheless absolutely worth watching for anyone willing to trade blows with its supersonic subtitles.  The Tatami Galaxy is an absolute triumph as it manages to blend the mundane, the fantastic and an important life lesson or two into a colourful, striking, intelligent and entertaining package - it's sad enough that such series are few and far between in Japan without the knowledge that such offerings are now even less likely to find their way to our shores.

Japanese audio with English, French and German subtitles.  Extras consist of text-free opening and ending credits, three bonus mini-episodes and an interview with the series screenwriters.

8
Its quick-fire subtitles are a major hurdle to overcome, but if you can master them The Tatami Galaxy is an intelligent, witty and innovative examination of the pursuit of happiness.
LATEST REVIEWS