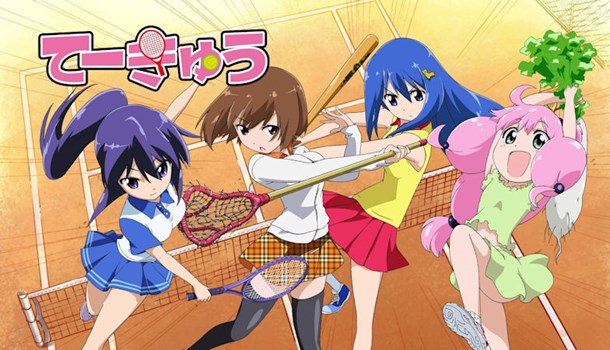 Teekyu 2 breaks exciting new ground in the realm of anime comedy by having it’s episodes be a mere two minutes long. It also aspires to have as many gags as a full length episode crammed into that length, a challenging but not insurmountable task.

Right from the word go the series has its tounge stuck firmly in its cheek - the show is supposedly about the members of a high school tennis club but even the synopsis admits that they rarely play tennis, and especially not on-screen. The show refuses to take itself seriously and throws gag after gag at you with such a density that explaining an episode would likely take twice as long to read as it would actually watching it. It really is excellent at maintaining a shocking pace as gags build one of top of another so you are never left waiting for something to happen - it’s a continual barrage of humour going wham, wham, wham right at you, so even if a joke doesnt tickle you it is immediately setting up the next one that just might make you snicker. It sports a lot of razor-sharp writing and restraint with the voice actors going a hundred miles a minute, with not a single word uttered wasted.

While not a slouch for the first three shorts, it was in the fourth episode when the show really “clicked” for me and I was falling over myself laughing. During this instalment the cast (whose names I cannot for the life of me remember, but that doesn’t hurt the humour) have a small table tennis tournament - every single line uttered is bent to tell a joke, and the vast majority of them hit, especially the parade of magnificent visual gags.

One really smart thing that Teekyu does is that it is barely animated at all - it would be more accurate to call it a rapidfire sequence of dioramas, with the “animation” being the movement of static elements in the frame. To describe it sounds astonishingly cheap but it honestly works really, really well - with nothing “animating” inside the scene the show can focus on making things look great in each cut. The show “pops” and you can instantly take in what is happening, a massive aid to the comedy which is flying at your eyeballs at around Mach 3.  Looking quickly at the first series of Teekyu they had not yet cottoned on to this style of animation and everything looks noticably messier and it is much harder to parse the humour.

Teekyu 2 is a wonderful, pure distilled shot of insane comedy without the cloying aftertaste - a template that other short anime comedy series should look to and learn from (not naming any names here).  Honestly in the time you have taken to read this review you could have watched most of the episodes currently available, so why not do yourself a favour and give it a go, eh?

You can currently watch Teekyu in streaming form on Crunchyroll.

9
When a comedy show makes you choke laughing, you know it has done something right (and life threatening).
LATEST REVIEWS