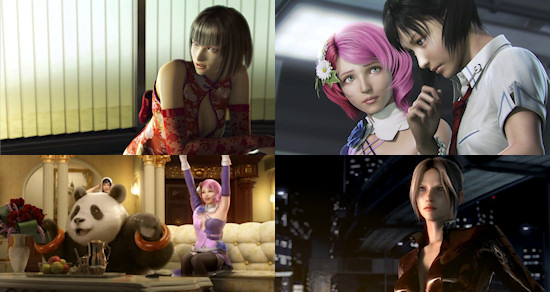 Even if you aren't a fan of the fighting game genre, you'll almost certainly have heard the name Tekken in discussions of said genre, and you'll equally most likely be aware of the enduring popularity of the franchise since its inception in the mid 1990s.  Given that popularity, it's no surprise to see the franchise getting some theatrical movie outings, and after last year's live action film this year saw the release of the 3D CG Blood Vengeance - a film sporting the credits of Dai Sato (best known for work on the likes of Cowboy Bebop and Ghost in the Shell: Stand Alone Complex) as the writer of the movie's screenplay.

Set between the events of Tekken 5 and 6, Blood Vengeance kicks off with a violent meeting between sisters Anna and Nina Williams, the latter of whom is driving an articulated tanker for no other reason than because it looks cool.  After a brief but hectic fight, we learn that this meeting was little more than a decoy, as Anna works with Kazuya Mishima in an attempt to track down Shin Kamiya, the sole survivor of the M-cell experiment and thus a precious item of interest to all concerned.

While utilising the services of a professional might seem like the best course of action to track down Kamiya, Anna Williams instead chooses a different option - hiring a schoolgirl to do the job for her in the form of Ling Xiaoyu.  Forced to transfer schools to carry out this mission, finding Shin proves to be easy enough, but things soon become altogether more difficult when her friend/rival Alisa Bosconovitch's true nature is revealed in the midst of a story that takes in three generations of the Mishima family.

Although we could spend some time discussing the various elements of Blood Vengeance's story, let's dispense with that in favour of a single broad but simple truth - this film is stupid.  How stupid, I hear you ask?  Well, as just a few examples we have a scene where characters escape on the back of a panda whilst propelled along by rockets, two scenes which sincerely try to wring emotion from comparing Alisa to a humming refrigerator, and an immortal character that dies in the first fight they attempt to engage in.

There's clearly a vein of deliberate comedy which runs through Blood Vengeance, but it's telling that it's often hard to tell where the comedy ends and the "serious story" begins, such is the straight face with which this movie delivers itself from beginning to end - there are scenes which seem like they can only be the work of a comedy genius, but as important points are delivered alongside them you begin to doubt whether you're actually supposed to be laughing at all.  As you might expect from a movie based on a fighting game, it's clearly been difficult to shoe-horn a plot into the film while still finding enough time to focus on the requisite action scenes, and the upshot of this is that Blood Vengeance is left with a story that would be dismissed as being too daft and scattershot to grace even a Saturday morning cartoon.

On the plus side, the film's CG animation is mostly pretty good - there is still some ugly character movement on show, particularly when characters are simply walking around, but the general aesthetic of the film is good while switching nicely from its colourful school surroundings to the more muted, darker palette required later in the film.  We should note at this point that the screening we attended at the Edinburgh event of Scotland Loves Anime was shown in 2D rather than 3D - we've been informed by those who also saw the movie's 3D screening in Glasgow that this two-dimensional treatment was by far preferable, with the fast-cut, fast moving fight scenes sported by the film not suiting 3D viewing in the slightest, turning those sequences into a blurry mess that was impossible to follow rather than sharper (but still occasionally tough to follow) action when viewing Blood Vengeance in 2D.

We should also point out that the screening we attended sported the film's English dub - a decent enough showing that can do little to disguise some of the film's cheesier and otherwise unintentionally hilarious dialogue.

All of this leaves Tekken: Blood Vengeance as a difficult proposition to rate and review - on the one hand, I want to recommend it whole-heartily as it's a hilarious, bizarre and ridiculous movie that truly is a kind of cinematic car crash that you just can't look away from; if you're a proponent of the "so bad it's good" movie-watching theory, you might just love it.  On the other hand, it's an undoubtedly awful film that will probably cause the eyes of even the most die-hard Tekken fan to roll.

Given this internal conflict, there's only one thing for it - to recommend that you check out Blood Vengeance if it interest you, but only do so when surrounded by friends and with a large amount of alcohol within arm's reach from beginning to end.  Just don't get distracted and end up falling in love with your fridge.

Tekken: Blood Vengeance was screened at the Scotland Loves Anime 2011 event in both Glasgow and Edinburgh - it will be officially released in the UK through Namco Bandai

3
A film so terrible that it almost rebounds back into 'so bad it's good' territory, Blood Vengeance is a mix of intentional and unintentional hilarity that is best served amongst friends and with copious amounts of alcohol involved.
COMMENT AND DISCUSS
blog comments powered by Disqus