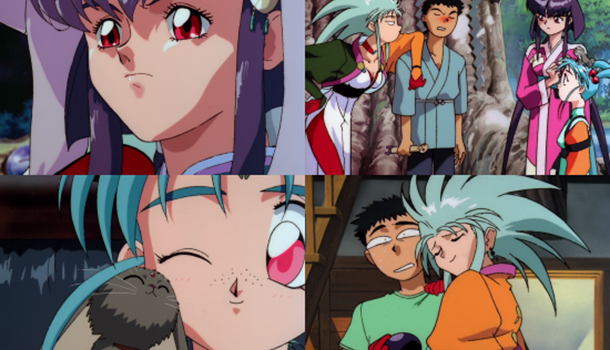 To make an anime fan feel old, you just need to tell them exactly how old one of their favourite series is. Tenchi Muyo is one of the first series I really loved back in the late 1990s, though it first came out in Japan way back in 1992. That makes it, and me, over twenty five years old. The old gits, such as myself, might remember the original run on late night television in the UK back in 1990 something, and its later (albeit edited) run on Cartoon Network. There it formed part of the channel’s after-school animation block, which introduced so many of my generation to the likes of Dragonball Z and Sailor Moon. As such Tenchi Muyo and its ilk are what I consider the forfathers of many of the series we see today. It also holds a special place in my heart because it was one of the first series I bought, and at my first anime convention too.

So, other than making me feel quite old, I think it's well past time for another look at this beloved series. Especially now that the series has been remastered into glorious high definition. Does this decades old anime retain its classic status, or is this a series that would have been better left forgotten?

Tenchi Masaki is spending the remainder of his summer vacation with his grandfather, a priest at the ancient Masaki Shrine. The shrine is located up in the mountains, where Tenchi spends his days cleaning and practising his swordplay skills with his rather ferocious grandfather. However, the shrine holds more than a few secrets. Deep in the mountains above the shrine lies an ancient cave, within which a mystical demon has been trapped by one of Tenchi’s ancestors. However, curiosity has a habit of killing the Cabbit (or Cat-Rabbit thing to the uninitiated). In Tenchi’s case, he manages to steal the keys to the shrine and inadvertently awakens the (surprisingly beautiful) demon Ryoko from her 700 year slumber. Armed with only the hilt of a mystical sword (which was powering the charm securing her prison), Tenchi makes a valiant escape from her clutches... just.

Unfortunately that isn't Tenchi's only problem, as Ryoko’s release triggers a series of events. Even causing various aliens to make urgent trips to Earth. First to arrive is Ayeka, Princess of the Planet Jurai, and her cute little sister Sasami. Ayeka is keen to discover the whereabouts of her half brother Yosho, to whom she was betrothed. Yosho disappeared hundreds of years ago to hunt a demon who was responsible for leaving a trail of destruction across various planets and civilisations. When her ship picks up Ryoko’s life signs, she quickly moves to investigate. Cue impressive space battles, where trees fight cats and lasers illuminate the night sky, bridges are destroyed and homes translocated to lakeside beaches. Eventually Tenchi and his family find themselves enjoying the company of three new lovely ladies in their household. Lucky for Tenchi, at least two of them consider him a specimen worth conquering.

Life isn’t easy though, and no sooner have things begin to settle with Ryoko, Ayeka and Sasami (and the cute Ryo-Ohki, the furry personification of Ryoko’s battleship), than everything becomes even more complicated thanks to the  arrival of airheaded Lieutenant Mihoshi of the Galaxy Police. Who pays them a visit while investigating the appearance of an intergalactic criminal, who threatens the Earth as well as the lives of Tenchi and his newly extended family. Tenchi's conflict with the criminal Kagato enables him to realise his true origins, and awaken a hidden power which will forever push him into the intergalactic spotlight.

Tenchi Muyo is one of the first and finest examples of what has now developed into the “harem” genre, whereby the male protagonist finds himself surrounded by many women. All of whom generally look to monopolise his attention, and get a piece of the action. The main male protagonist in these series tend to be wet, weak, often unlikeable, and perpetually indecisive in an attempt to polarise the fanbase into picking a “best girl”. Some series have done a good job for example: Ah my Goddess!, Highschool DxD, Sekirei, The World God Only Knows, to name some of the more recent examples. Unfortunatly, in most cases these series just don't do anything for me. However, although Tenchi Muyo started all this Tenchi is anything but a weak character. He is incredibly likeable, charismatic, and will do what it takes to defend those he loves and the world at large. This is a common trait between all of those series I mentioned, and it is this aspect which contributes to making Tenchi Muyo a true classic.

The series has been remastered for the bluray release (though not the DVD), which is made quite clear by the crispness of the animation on offer here. The material has been upscaled from a 720p source, and in my case it was upscaled again by my home theatre equipment to 4k. I found the original DVDs to interlace and tear quite frequently, but this new release does not display this issue in our review copy.

One of the curious things about Tenchi Muyo is that it was produced during a time when US dub companies often recreated musical soundtracks with localised lyrics. Tenchi Muyo therefore has two separate soundtracks, one with Japanese vocalists and lyrics (which is only on the Japanese Dub) and another with English vocalists and lyrics (for the English dub). I don’t know of many, if any other examples of this, but it always drives me a bit barmy. Because, although I love the English dub, and the English songs, the Japanese songs are just so much better. Though, I will forever be in love with the English dub, purely as this is the format in which I first enjoyed Tenchi Muyo.

I could continue almost forever on why this Tenchi Muyo OVA is a must have, but I think it is better to say this instead: I consider Tenchi Muyo to be a true classic. It spawned in me a love which has not wavered for almost two decades. The bluray is perhaps the definitive version, and is certainly the most beautiful looking and sounding version yet. While the animation is somewhat dated, the story, characters and comedy of Tenchi Muyo cannot be recommend highly enough. If you are a fan of science fiction, comedy, and romance (and want to see where the harem genre came from), then give Tenchi Muyo your full attention.

And… come join me in a discussion on our forum as to who is best, Ryoko or Washu! [Discussion? It's clearly Ayeka - Ed.]

10
Tenchi Muyo OVA Collection is a must have remaster of the classic anime series.