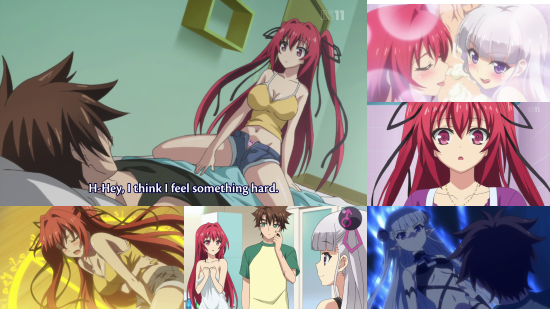 I know what you're thinking - here we have yet another sis-con harem series, only this time involving supernatural beings and, from the series’ description, succubi. Well, the first thing that I have learnt is that not only is the synopsis utterly wrong, but actually The Testament of Sister New Devil is better than I expected.

I feel that I need to explain myself a little more here. The Testament of Sister New Devil starts, as is common in the anime world, with a father bringing home a pair of young girls - sisters in fact - to come live with him and his son in their large new house. Of these two girls Mio, the elder, is quite the hottie and her gothic lolita styled younger sister, Maria, is the stereotypically perverted and twisted sibling that dotes on her elder sister. From the moment they met eye to eye Mio and Basara, the young man of the family, were attracted. I mean, come on, you are a young, hormonal teenage boy, and two girls, neither of which are blood relations, move in with you. Opportunity knocks... or does it?

Mio is not an innocent young girl and her little sister is not just a perverted loli-goth. They are both demons. Mio is, in fact, the sole heir of the former Demon Lord and Maria is actually a succubus sent to protect her. In fact, Basara’s father didn’t just bring them in innocently as he was tricked by Maria, and now they intend to remove Basara from the picture and keep this lovely new house for themselves.

Basara and his father are both of the Hero clan, a clan of humans who are gifted with abilities allowing them to protect humanity from the influence of the demon realm. As expected a fight happens, and in true anime style a truce breaks out resulting in them cohabiting as a family, only now Basara and his father become protectors of the fledgling Demon Lord from those who seek to obtain her power.

Again, nothing is as simple as it seems.

It would have been quite straightforward for Basara to just act as a protector to Mio, but in order to be properly connected to her and know her whereabouts they undertake a “contract”, binding them magically via Maria’s demonic power. Mio becomes the servant to Basara, but, due to Maria being a succubus, the contract has some rather... "flustering" side-effects. To put it simply, she goes into a form of “heat”, and this is where the series garners most of its perverted scenes. Brace yourself for minutes of almost complete screen white-out as the young contractors try to resolve Mio’s heat.

I admittedly find this setup to be a highly amusing, if convoluted, method of providing the quantities of fan service required for a series of this genre, instead preferring the use of antics exhibited by the likes of To Love Ru, but a trope is a trope and it gets the job done. The use of a suggestive and demonic gothic lolita to "push" certain scenes certainly put a smile on my face when really, it shouldn’t have. Sis-cons, eat your heart out.

What comes from this setup is an escalating series of battles and fights against the powers of the demon realm as they try to kidnap and acquire the latent power within Mio and bring an end to the peace between humanity and demons. Cue enemies with masks and overwhelming attacks that bear a striking similarity to the spirit bombs used within Dragon Ball Z.

As much as I am taking the Michael out of the series so far, I have actually enjoyed it. It is stupid. The plot is badly tacked together. Mio’s character, as healthy as her design may be, is inconsistently written. Maria is borderline psychotic but provides essential comic relief and Basara is essentially a character whose template has been taken off the shounen shelf and tacked into the series. The fight scenes are comical, with Basara being the near-invincible heroic character whose wounds always heal just enough to perform the killer attack to save the day. The enemies resemble those from any James Bond film, describing the situation just before they deliver the killing blow.

But yet The Testament of Sister New Devil is still entertaining enough to make me want to keep watching, and this is because the series is well paced and provides just enough draw to make me curious enough to wonder what stupid thing will happen next week. The censoring will ensure that I won’t see any jiggly action, but there is just enough suggestiveness to at least allow me to enjoy the perverted scenes and make me wish for something less censored in the future. Is this series a keeper though? I doubt it. There is nothing memorable about the series thus far, and at least from where I am sitting this is likely just going to be a series that will provide a bit of controversy due to its ongoing censorship but will otherwise just fade away. Worth a gander, but probably not a keeper.