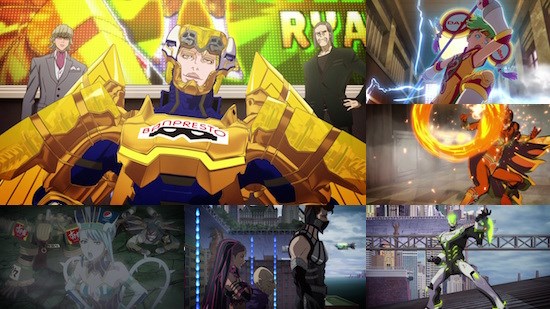 Unlike Tiger & Bunny's previous feature-length outing, The Beginning, which was largely a series recap rounded off with a new but small tale, Tiger & Bunny: The Rising is an entirely new story which even throws a new hero into the mix. We join our titular heroes some time after the events of the series - Kotetsu and Barnaby (Tiger and Bunny respectively) have been relegated to Hero TV’s new second league and reduced to catching run-of-the-mill criminals with a team of less than stellar NEXT-powered colleagues. Kotetsu seems to be settling well into a role as mentor to the second leaguers, but Barnaby meanwhile appears bored out of his mind.

Thankfully for Barnaby this state of affairs doesn’t last too long, as a new boss starts shaking things up at Apollon Media, although, not all is quite as it first appears. The new man at the top, Mark Schneider, makes Kotetsu and Barnaby an offer they can’t refuse - to return to the top division of Hero TV. However, they soon wish they had refused Schneider’s offer once his true intentions come to light. Unfortunately, for Kotetsu in particular, the pair learn a little too late that they should have listened more carefully to Schneider’s words, and Barnaby is left flabbergasted when a new hero is unveiled as Wild Tiger’s replacement.

The new hero on the block is Ryan "Golden Ryan" Goldsmith, a somewhat obnoxious but ultimately well-meaning hero who possesses the ability to increase gravity in an area around him. Along with this new hero comes the news that the second division is to be disbanded and all the heroes therein made redundant. With his powers waning, this leaves Kotetsu little choice but to bow out of the hero game and become an ordinary citizen of Stern Bild. Having been a hero for most of his adult life, the transition isn’t an easy one for poor Kotetsu, though his trademark stubbornness doesn’t help matters either.

Even before the dust has chance to settle on the Hero TV reshuffle, a series of disasters look set to wreak havoc during the build up to Justice Day. These events seem to point towards an old legend of a goddess: The Goddess of Justice, who supposedly sends a multitude of curses when she becomes unhappy with the greed of man, so that they might see the error of their ways. These events, added to the aforementioned shake up at Hero TV, leaves our band of heroes in disarray, and it’s here where the film really shines. Each of our heroes lose themselves in one way or another, and we see them forced to battle their own demons before they can truly face the trials of the supposed “goddess”. This is especially true for Fire Emblem, a hero who never really got the focus he deserved in the series but who is finally given his moment to shine. On the opposite end of the scale, major villain from the TV series Lunatic feels criminally mishandled here - his presence seems to be merely as a nod to the fans rather than serving any real purpose in driving the plot - this is a real shame as he has the potential to be one of the most interesting characters in the film.

Visually, Tiger & Bunny: The Rising looks as good as you might expect on Blu-ray, though it’s the DTS-HD Master Audio where the film really shows the benefits of the format, although you will need a decent surround sound system to make the most of it. The on-disc extras on the Blu-ray are a mixture of the usual fare, though some of them are quite interesting in their own way. The “Theatre Manners“ skits in particular provide an interesting window into the world of Japanese cinemas.

Its treatment of Lunatic aside, Tiger & Bunny: The Rising plays most of its cards with style; the only major issue here is that the film leaves you wanting more Tiger & Bunny in a world where no more currently exists.

8
The Rising provides a welcome dose of our favourite Japanese superheroes, though be warned that it will leave you wanting more.
LATEST REVIEWS