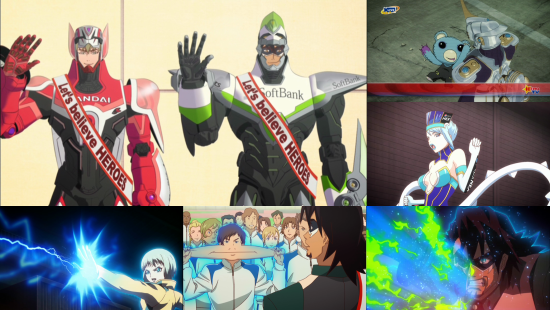 I imagine that many of you reading this had a point in their life where they played the superhero game on the playground. We all wished we could have a superpower and then spend our time using it for good, evil or just for nefarious purposes. If you were one of the lucky few, you managed to bag yourself one of the “good” superpowers on the playground. You know the ones: flying, super strength, invisibility, x-ray vision or super speed. I always found it puzzling that we were only ever allowed one super-power though, never two... I never did work that one out.

Wishful thinking aside, I am not convinced that the ability to stretch your face, your neck, or to sweat profusely is strictly a skill that would lend well to being a force for good, but ah well. Not everyone is born a hero, but we are all born special.

The last volume of Tiger and Bunny left us with the unpleasant taste of Lunatic, the fire wielding follower of Judge Dredd’s brand of justice, in our mouths. Lunatic, whose methods of fighting crime involve using fire as the ultimate cleanser of one’s sins, have scared the citizens of Sternbild. Where once they relied upon the Heroes to fight crime, with mixed results of course, the impact of Lunatic’s merest presence has broken the bond of trust between Sternbild and its heroes. What is a caped crusader to do? Well, it’s time for the power of positive PR. It is time for the Heroes to prove themselves to their audience and do some good. How better to show the world at large how Heroes are trained, selected and then thrust into the public limelight. Maybe a bit of babysitting for a VIP would help instead?

The name NEXT is synonymous with the people with that of "mutants" - these abilities are mutations and in the world of Hero TV, those with abilities are controlled, monitored, and potentially recruited to service the greater good. To be NEXT is to be both simultaneously more evolved than humans, but also less human at the same time. This confusing belief is what drives the emergence in this volume of the organisation named Ouroboros - the very same organisation who were responsible for the brutal murder of Barnaby’s family in a fire return with a vengeance. Their temporary leader, Kriem, a NEXT with the power to control inanimate objects and with a vendetta against humanity as a whole thanks to the ritualistic humiliation she was forced to endure because of her NEXT abilities, takes the city of Sternbild hostage with some teddy-powered mecha suits. Her demands are simple - release her beloved Jake Martinez, or her teddies will destroy the fabric of Sternbild.

There isn’t a lot you can do when you are confronted by a stuffed animal at the end of a laser guided missile system and a minigun... well, unless you have superhuman abilities, a super suit and lack a fear of dying. Wait, isn’t that is exactly what Heroes were trained for? For the Heroes of Sternbild, the arrival of the this army of stuffed death machines are their saviour, a chance to redeem themselves and win back the trust of the citizens, all on live television.

If only they stood a chance. It seems that even with a militia of Heroes, there is little that can be done against a maniac holding the lives of thirty million people hostage. Or is there?

All of the action aside, Tiger and Bunny still has some way to go to opening up the histories of its heroic idols, but in this volume we get to discover the true selves of two of the more hidden characters from Hero TV. Both the high-kicking Dragon Kid, who as it turns out is quite a cute tom-boy type, and the peculiarly named Origami Cyclone, have their time in the spotlight as the focus turns onto their own character-centric storylines as the Ouroburos arc develops. For those wondering what Origami Cyclone’s superpower actually is, other than sprouting utter nonsense catchphrases and running away, it’s actually rather interesting.

Tiger and Bunny hasn’t lost any of its flair from the first volume - if anything, thanks to the lack of introductory episodes and our first real story arc, the series finally feels like it has gained a firm footing and is progressing. Especially with the large reveals regarding Barnaby’s past.

The format of the release is the same as with the first; a single Blu-Ray disc with episodes eight to thirteen upon it, and two separate DVD discs with three episodes each and the bonus content. On the DVDs there are a couple of minor issues with the Play All function again, with the disc jumping back to menu on both disc one and two when the skip to next episode function was used.

The bonus material is a bit of a weird thing. It’s a 52 minute long video on the production of Tiger and Bunny, detailing the advertising features, the production team and featuring some rather good interviews with the voice cast including Hirata Hiroaki (swoon). The featurette is presented by the two plush characters Usa and Tora, who... I'm sure you can figure it out. I am not a big watcher of bonus features, but in this case, I would recommend watching it. It’s actually rather informative and quite cute at times, especially the real-life bromance element between the actors playing Tiger and Bunny, and there are some titbits into the world of voice acting which I have never actually seen before.

This instalment of Tiger and Bunny is the second volume of four. The six episodes on this set lead us through the first major story arc of the series and is an over-the-top ride into the world of heroics and 24-hour television, making it an excellent way to spend an evening.

8
Jake Martinez is a troll - that is his superpower.
COMMENT AND DISCUSS
blog comments powered by Disqus