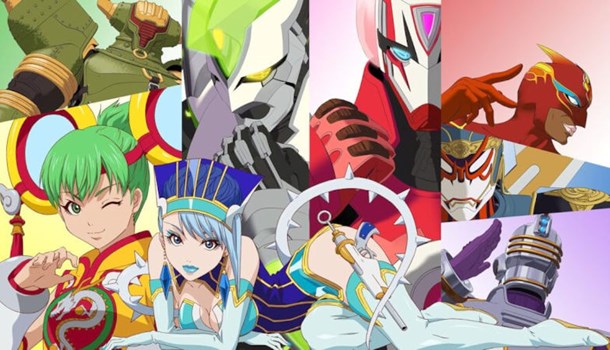 Over the last few volumes Tiger & Bunny has taught us a lot of lessons. First and foremost, it has taught us that Superheroes are real human beings who have thoughts, feelings and aspirations. They are a gentle and altruistic bunch, lovable but with real quirks and limitations. Secondly, Tiger & Bunny has shown us what could happen to the world should Simon Cowell decide that the music industry business is too boring and turn his sights onto the world of heroics. Actually, the thought of Simon Cowell having the same abilities as Mr Maverick, the owner of HeroTV, frankly frightens me. I do not want to live in that world.

At the end of the third part of the series we were left with a conundrum - Kotetsu and Barnaby were having a crisis of friendship due to Kotetsu hiding the fact that not only was he getting old, but his ability to maintain his so-called "Hundred" power was diminishing. This little spat was not helped at all by Barnaby finding new evidence to support the fact that the murderer of his parents was not Jake at all, but possibly someone much closer to him. Perhaps even everyone’s favourite heroic media mogul?

The problem with being a serial killer is what to do when you are on the verge of getting caught. Considering the long process Mr Maverick spent building up his empire - the lives he ruined, the ambitions crushed - surely he wouldn’t let off two intrusive heroes threatening to dig into his history and uncover the truth? Of course not. However, the means of dispatching these heroes was somewhat... unconventional. Instead of simply shooting them, or dispatching through some James Bond-esque manner, Mr Maverick aims for something much more personal: their reputation. With one fell swoop Barnaby finds himself without Kotetsu as a partner, and Kotetsu finds himself a wanted criminal for the crime he was trying to solve. A wanted man with reduced super powers, surrounded by his former friends, homeless and out of cash. Truly a desperate situation for Kotetsu.

One of the elements which Kotetsu’s back story has focused on is his family - his relationship with his daughter, Kaede and how she fits into his heroic lifestyle in Sternbild. Due to the ongoing manhunt for Kotetsu which Kaede sees, the rest of the family finally let her know why her father lives so far away and why he has been so distant.  Cue a dumbstruck face for Kaede and a hurried runaway girl scene as she races to Sternbild to rescue her father. This young NEXT, and her arrival at Sternbild, signals the beginning of the end of Mr Maverick and the idea of what a Hero is, and an interesting change in branding for Wild Tiger...

It’s incredibly difficult trying to summarise the closing story arc of what I personally consider to be one of the anime highlights of 2013. Tiger & Bunny, from its quite comedic start in the first quarter of the series, has evolved into a touching parent/child relationship story benefiting from a very likable and strong cast spanning not only from the show's heroes but even the production crews, the families of the Heroes, the villains and even all the way down to Kotetsu’s boss Alexander (who is voiced by Daran Norris, better known for his voicing of Spottswoode from Team America: World Police). The breadth and depth of these characters is the true strength of the series, especially as the majority of the series is devoted to expanding the character development and history of the cast rather than the rather cliché evil organisation Oroburos which served as a catalyst for stories throughout the series. However, as the Oroburos mysteries have essentially been left open-ended at the end of the television series, it’s increasingly likely that this will not be the last we see of this “evil” non-entity, though possibly the last we will see of some of our favourite heroes.

Superhero series are always popular. Tiger & Bunny’s release has managed to capitalise on the current popularity of superheroes in mainstream movies by being easy to access and perhaps being one of the least Japan-centric series out there, having its own sense of character unlike some of the Japan-Marvel collaborations such as the Iron Man and Wolverine anime series. This show is therefore a series which would be an excellent introduction to the world of Japanese animation; an excellent gateway series so to speak, especially due to its excellent English dub and the consistent level of acting, animation and writing quality since the opening episodes.

So what next? There is currently a single Tiger & Bunny film, The Beginning, available from Anime Limited later on this year we hope. The second film, following on from the series and named Tiger & Bunny: The Rising, is a wholly new animation project with new stories separate from the series to date. Although we are unlikely to see a UK release until late 2014, these films are the transition of a successful anime franchise onto an even more accessible feature-length format. Although only two films have been announced, we'd love to see more announced in the future.

Tiger & Bunny has been a comedic, well developed and highly entertaining series over its four parts. It has given us well written, lovable characters and driven stories through to closure. Although there are some mysteries left unsolved at the end of the twenty-five episodes, the ending presented is satisfying and corny without detrimenting the series - exactly what we had come to expect given the scenarios presented through the rest of the series to date. In a word, it’s just... good, and I don’t think I can say any more. Now, all I need are the movies to go with it.

English and Japanese audio with English subtitles.  Extras consist of Ustream Mini Corner 3 and Japanese Meet The Cast features on the DVDs in this combo pack.

9
A worthy finale to a heroic series.