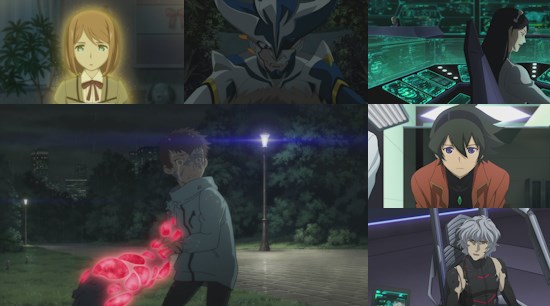 In a world where there have been so many stories told, it’s getting harder and harder for anything truly original to come out nowadays, allowing such rare occasions to make bigger and bigger impacts when they do. On the other side of the coin you have shows like Towanoquon which revel in their homages to their predecessors. But does this series of short movies cross the shadowy line between homage and plagiarism?

Our story begins in the Japan of the near future, where we see a boy transforming Akira-style into a monster. He is quickly attacked by, and I’m totally serious, Power Rangers on unicycles (I’ll just let that image sink in for a bit). Before he can be destroyed, he is saved by a blue and white figure that appears to be part man, part fish who fights off the attackers and saves the day.

As the story progresses we learn that this hero’s name is Quon and he’s to be our lead character for this story. Towanoquon doesn’t really explain this very well though so you could be forgiven for thinking that the lead role will belong to Shu, the cyborg who begins to remember his troubled past or Kiri, the mute girl hiding great power, given that both of these characters get a roughly equivalent if not greater amount of screen time than our lead in the first couple of episodes.

It turns out that Quon is helping an organisation to protect and train individuals with ‘abilities’ to prevent them from being hunted down by the shadowy masters of the cyborg task force (our unicyling power rangers) or from turning into monsters dominated by their own power. As you may guess, Quon is also hiding a dark secret which will set the scene for the series finale.

Whilst I won’t say that Towanoquon is a plagiaristic work, it does suffer in that its influences have taken over to the point where there is only homage left and no real original content. The plot is very much X-Men mixed in with Heroes or, for a very good anime example, Darker Than Black. In fact you could probably switch discs when someone isn’t looking and they wouldn’t notice too much. The characters are all classic stereotypes with nothing that really helps distinguish them aside for one or two of the side characters (such as Miyu who can speak to animals but can’t speak English when using her ability) who are tragically underused.

Adding to the confusion is the series refusal to nail down rules for itself. We’re told that Quon is immortal and heals incredibly rapidly but then sometimes he doesn’t. In fact, his powers seem to completely change from situation to situation as do those of several other characters, altering to get the plot out of a corner rather than putting in the effort to tailor the plot to its characters.  The result is that the series doesn’t stand out in any way and you end up wanting to watch one of the shows that inspired the series rather than sit through these six fourty-minute episodes to see what happens next.

On the other hand there are some positives too. The animation is as good as you’d expect from Studio BONES (who incidentally were also responsible for both series of the aforementioned Darker Than Black) and is consistentently fluid and detailed bar a few awkward CG sequences, largely involving the strange train the cyborgs use.

The English cast are also on fire for the dub here, with anime veterans like Monica Rial, Jessica Boone and Hilary Haag all giving the most focused and restrained performance they’ve managed for a long time - it’s a real shame that the awkward scripts get in the way of some brilliant performances.

The incidental music is pretty good and there are some great songs in the mix including Reckless, a brilliant J-rock number that plays over the closing credits.

Ultimately though there just isn’t anything here that will hold your interest for very long and the story is so over-used that there are never any real surprises or gripping moments coming, meaning that watching the series is more a case of ticking boxes. It’s not a bad show, but it’s so bland and average you might wish it was – at least you’d remember what you’d just been doing for the last five hours....

5
Watch this and you'll quickly find yourself with Darker Than Black in the DVD tray instead.