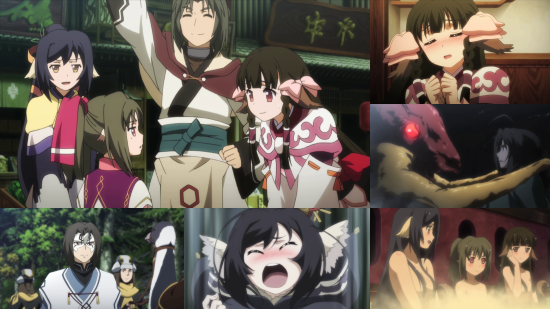 Over the last week or so I have had the pleasure of enjoying the first series of Utawarerumono again. Having first covered this series almost a decade ago thanks to a newfound and unhealthy obsession with animal-eared girls and the Internet (and a discovery of how to purchase region 1 DVDs), I rapidly found myself falling in love with the coy but strong nature of Eruru, and found myself equally pulled towards the dangerous elegance of Karura. I was completely lost to them both.

But, in true form I found myself actually hooked on the post-apocalyptic nature of the story, the battles and the direction. Even now it is still perhaps one of the most war filled and confrontational series I have ever watched, except those that pan out following a week long game of Civilization.

The general advice online is that “you don’t need knowledge of the first series or the game to watch” Utawarerumono: The False Faces. I personally think this is unwise, and this is why. I think that at least some prior knowledge is essential in understanding much of what begins to transpire in this second series simply due to the way the universe is constructed. Walking into the series with no prior knowledge, you would think that the show is basically cute girls and fan service. You aren’t wrong, but there is immeasurably more depth than that. However, having seen these first four episodes it’s very easy to get sucked in if you are new to the franchise simply because the characters are cute and well written. The characters, setting, and those swishing tails will carry you along, just as Utawarerumono did with me all those years ago. But all of the hints, which are all nods to the game and to the first series, will be lost, and these are kind of critical to the story moment which are beginning to emerge between all the character introduction fluff.

As with the first series, it all begins with a man waking up. This man is no Hakuro, yet he is just as mysterious. Whereas Hakuro has the mask, this new man doesn’t. In fact it’s the lack of what he has that is interesting. No memory. No abilities. No strength. When he is faced by certain death from the combination of a large ravenous amoeba and the being attacked by a giant centipede, he can only thank some mysterious god for finding his way out and running into someone with a bit of sense: Kuon. Here is where the fun begins. The anime of Utawareumono leaves out the origins of Kuon, but just from her character design, her ears, tail, and her quite insane strength, it’s evident that she bears some relation to someone we have met previously. She is a healer, a warrior and, let’s be honest here, cute. Kuon is to the second series of Utawarerumono what Eruru was to the first. She is a fascinating and bubbly character who, while also being brave, saves our erstwhile male amnesiac from certain death and delivers him to a nearby village while taking care of him as his guardian. Do these events seem familiar to anyone?

It soon becomes evident that, while friendly, our male amnesiac is lazy, lacks stamina and even the most basic of skills. However it also becomes evident that he has the mind of a scientist and an engineer, rather than a warrior. It’s about time he gets himself a name, and in a fashion now traditional to Utawarerumono, this is left to a respected elder gentleman in the village, who isn’t quite what he seems. Haku (yet more nods back to Hakuro) travels with Kuon and the village to the capital city Yamato where Haku and Kuon are welcomed by officials of the city who wear strange masks on their faces (again, another nod). These masks were granted by the Emperor of Yamato to the guardians of the country; however their purpose is not quite known as yet. At a guess, as they look a lot like Hakuro’s mask, it probably turns them into Kaiju just like Hakuro. Watch this space, I guess.

It’s fair to say that not a whole lot happens in these first few episodes. Haku does begin to prove his worth after fixing the water wheel, helping defeat a giant centipede, providing tail stroking services to Kuon and proving himself to be a highly capable if illiterate strategist. But these first episodes are serving mostly as an introduction into the universe and the characters, which is fair enough as this is exactly what the first series did. It is only at the end of the fourth episode - ignoring the gratuitous fan service in a delicious bathing scene - that an inkling of a future story begins to emerge, but as Utawarerumono: The False Faces is going to be a long one, I think it can afford to be a bit of a slow burner.

One of the things that I have enjoyed here is how the advance in animation technology has improved the series from its predecessor. Of note, and this is so like me, I have noticed that the people are a lot more emotive than previously. In the first series, although the people had animal features, they were rarely used, except for the major characters. Now, ears are twitching, tails are swishing, and all manner of happy animalistic mannerisms are coming forth. Also, the backgrounds are more detailed and everything looks just… cleaner. Then again, this may in part be due to the fact this series is animated for Blu-ray, compared to its predecessor being for television and DVD.

I for one am now booking a slot each week to spend with an old friend telling me a new story. I have missed the depth of the universe, as grim as it may be at times, and I have loved the writing and the characters. Although I shall continue to miss Eruru and Karura, Kuon seems to be the happy mix of both characters. The beauty and cuteness of Eruru, and the strength, agility and sexy elegance of Karura. I might be in love...

8
A strong start to the long-awaited sequel to Utawarerumono.