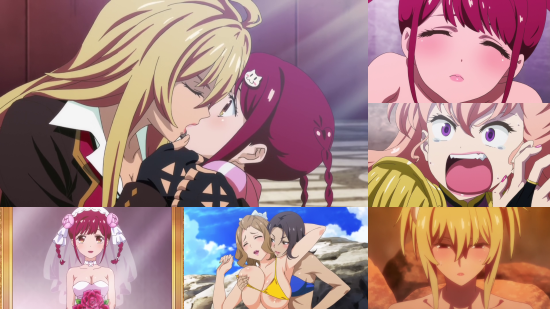 This is a NOT SAFE FOR WORK warning. Although there is no pornographic content shared in this review, it does contain graphic verbal imagery.

Whoever came up with the idea of filling a tropical island with beautiful girls, giving them transformative powers that only activate when they orgasm, and turned it into an anime that delivers (without falling on the wrong side of the law) pure unadulterated lewdness deserves a medal. It has been a while since I have sat through - and there were times I could barely sit, being honest = such a pervy and, erhem, effective anime.

Valkyrie Drive: Mermaid is not marketed as pornography but bloody hell, it has moments that are more explicit and wonderful than many of the actual animated features that I have born witness to over my tortured Internet existence.

Let me start at the beginning for you as, believe it or not, there is actually a rather good story contained within the series. A virus has spread amongst humanity: the Armed Virus. This virus causes a small percentage of people to manifest transformative powers. The afflicted are classed as either Ecstas or Liberators, probably because the Ecstas are the ones that transform only when they orgasm, and the Liberators are those that liberate the virginity of the Ecstas. At least, that’s my theory... they should probablybe called Deflowerers, or something. Anyways, what is important is that all of the afflicted are girls, and as these girls can only transform when they come... cue hundreds, and I do mean hundreds, of girls, sharing spit, biting nipples and cupping clitorises to wield their secret abilities.

Valkyrie Drive does have a bit of a story beyond this, as thinly veiled behind the rampant sex and nudity as it might be. The girls aren’t on the island of Mermaid (yes, really) of their own volition. They have been forced there by the world at large, shipped in torpedos that are used to get through the giant forcefield that surrounds the island and stops the girls escaping. On the island itself, there is a kind of feudal system where the girls are told to serve or stay quiet under the command of the Governor (who may or may not be a bloke), a psychopathic Princess Charlotte, and the coy Commander Kasumi. But even though they run things, they are no match for the dynamic romantic pairing of Tokonome “The Cat-Obsessed Virgin” Mamori, a sword transforming Ecsta to the buxom beauty Shikishima Mirei, a former soldier who claims to be fifteen. Sorry, don’t believe you. No fifteen year old knows how to play the high notes on a lady like that. But hey, this is anime after all.

The island itself is divided. Those who are unable to, or won’t follow, the rule of the triumvirate at the top are exiled, and most have moved into the quaint little hostel of Torino Town where all the girls have fun, eat food, and when the time comes, used the body of a rampaging 100 metre tall Ecsta with giant breasts as a water slide.

I am kind of at a loss as to say exactly how much I have enjoyed myself while watching this show. No, not in that kind of way. It’s actually hard to enjoy the series quite like that, as just for the record as the show is heavily censored. I won’t comment on the “other” broadcast version, but it’s safe to say that the proper goods, minus the flash bang of the censor star, will only be available should the series see the light of day on Blu-ray.

One thing that has greatly amused me, other than the prolific nature of this series to create perfect reaction faces and stunned glances, is how much fun the actors are having while they are performing their dialogue. For example, Mei Fon is a character inserted purely for comedy value. She is an older sister type, but also comes out with some of the most hilarious jokes and her delivery is just perfect. Saying that, an applause needs to go out to the writers - the chap who decided to name the giant girl in episode five “Minimi” is a genius. I haven’t heard an ironic Austin Powers reference in years, and just reading that almost caused me to lose another keyboard to my laughing and spluttering.

Valkyrie Drive: Mermaid is pure trash. As a series it exists for one reason, and one reason only - to arouse. If watched in a public place, as I did when this was on the cross trainer at the gym until Mamori came for the first time, then you will be found out and probably followed home by some suited people who will “want to have a word with you”. If you watch it with your better half, you will probably find yourself single.

But you know what, I haven’t had this much trashy fun watching a show in a long time, and that is actually what Valkyrie Drive is: just fun. Yes there is a serious “story”, but it’s all kind of fluffy and half-arsed, and the entire show is written just to create more opportunities for a five way girl-snogging tryst to occur. If you are after a bit of serious television, avoid. If you hate fan service, avoid. If you are like me and have a bit of a perverted streak, then give Valkyrie Drive a go, just ignore the light bars. But remember, you will not be proud when you have finished sharing the spit, but you will have a smile on your face.

NOTE: Censorship is a terrible thing at the best of times, and this especially of this series. In this case, the light bars completely destroy everything that is good and pure about this show. The score has been reduced considerably due to the terrible broadcast quality and the censorship used by the source television station, and the fact this has then been used for the western release when there was a perfectly healthy version available without the light bars!

You can currently watch Valkyria Drive: Mermaid in streaming form on Animax UK.

In front of you, have some of your favourite tipple at the ready. The aim of this game is not to drink or get drunk. This game needs to take place in a semi-public place, like a pub or a gym, or on a bus. You are to watch Valkyrie Drive, on a large format smartphone or tablet, where people can glance at you and the filth on your screen.

You are not allowed to turn the screen off, minimise it, or otherwise stop the content. You can hide or move the screen so it is obscured. The aim of the game is to watch the series, and every time you feel shame, take a drink.

I failed twice. Once on the cross trainer at the gym where I was reported for having explicit content by the person next to me, and again on the train when someone made a not so nice comment. Both times, I forfeited the drink, but had a healthy helping of gin at home.

EDITOR'S DISCLAIMER: The UK Anime Network does not condone readers getting arrested. Even though you probably deserve it if you actually play along with this game.

5
Something for every healthy pervert in this very driven fan service series.
COMMENT AND DISCUSS
blog comments powered by Disqus