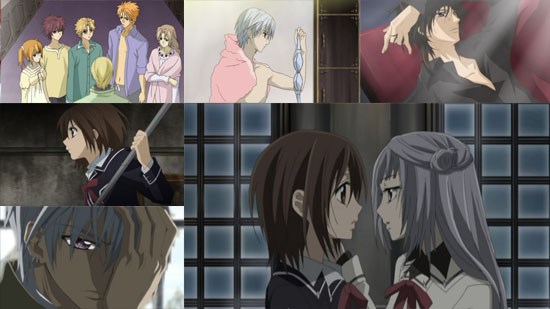 The vampire saga is in full swing now, but does it really have the steam to make it through to the end?

Zero is sent on his first mission as a vampire hunter which brings him into conflict with the Night Class assigned to the same target. Not only that, but a new transfer student arrives to the Night Class and has put everyone on edge. The question is, who is she and what has she got planned for the Cross Academy?

If there is one thing that I have been finding with Vampire Knight, it's that it enjoys running around in circles and not actually progressing anywhere to any great extent. While the story of Zero dealing with his new vampire ways is somewhat interesting, it seems to be the only thing that is actually progressing. Even this set of episodes is quite Zero-centric as we take another look into his past. We also get a Zero centric plot twist that is surrounded by neon lights screaming “PLOT TWIST RIGHT HERE!”

Most of the other characters seem to have become furniture to make sure that the world isn’t just the three characters of Zero, Yuki and Kaname. They do very little and even the introduction of a new character can’t heat things up to much more than a slight smoulder.

On the plus side there are signs that an end game is in place and with only one more DVD release to go for this series, there does need to be some pay off otherwise we have been sitting through thirteen episodes  of absolutely bugger all.

As such this DVD feels very much like a place holder - while the pieces are coming together with these episodes, it doesn’t do much more than place the pieces on the proverbial board. For those that love all things vampire, with your walls pasted with Twilight posters, then Vampire Knight is easily up your street. Pretty boys and girls all doing pretty things with pretty surroundings and pretty battles it becomes a whole lot of pretty. Those expecting a Hellsing-style of vampire offering are going to be disappointed as relationship and character development are the main dishes here over the blood and violence.

Still, as relationship-driven anime goes there are far worse series out there; Vampire Knight shouldn’t be dismissed entirely, just don’t expect a huge amount from this  third volume.

Nothing at all. Just the standard Japanese and English soundtracks.

6
A plodding and uneventful DVD, but hopefully it sets up the final volume to pack a punch
LATEST REVIEWS