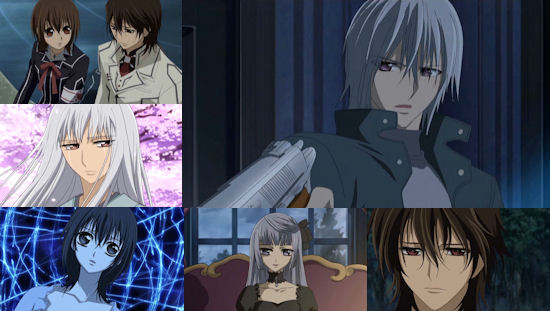 As Vampire Knight's final volume appears on the horizon like a ray of sunlight (possibly not the best analogy for a review of a vampire series, admittedly), we can at least rest easy in the knowledge that the second season of the show, subtitled Guilty, is already firmly on Manga Entertainment's 2011 release schedule starting in April.  A good job too, as the final three episodes on display here work hard to lead into some important moments that will define that forthcoming series.

Before all that however, Pureblood vampire Shizuka Hio's appearance proves to be the most pressing matter for all of the key characters as this final volume kicks off, with Yuki learning of a way to save Zero no matter what it may cost her personally while Zero himself is enjoying a far from happy reunion with his twin brother Ichiru.  With all of this going on you could be persuaded to think that the show's other Pureblood, Kaname, has little interest in proceedings, but as the story surrounding Hio ramps up to its climax this proves to be anything but the case in a ruthless fashion.

With these episodes exploring the relationships and bonds between various parties, including explanation of Shizuka's back story and her relationship with Ichiru, it has to be said that much of this final volume is dripping in angst - everyone seems to have an issue with either how they are perceived by or reacted to by another, and while this drives certain aspects of the story forward with gusto on occasion, at other times it feels like such emotions are welded on almost inexplicably in an attempt to fit the tone of the series.

This is perhaps just personal preference on my part, but I enjoyed Vampire Knight far more for its opening half where it focused on being a "proper", more traditional vampire story; where everything vampire-related was an obvious allusion to sex and adolescent relationships complete with its preoccupation with who "bites" who first.  Although this series doesn't fail completely at trying to shift its focus elsewhere it doesn't create a sufficiently compelling narrative to grab you either, relying on those occasionally forced emotions rather than any genuine feeling of empathy with a character or sense of drama at its proceedings.

The good news here is that the climax to this series holds far more promise in the way it sets up its key relationships and characters for the second season, which could herald a return to form for those who persevere with the series.  No doubt the Vampire Knight die-hards will be more than happy to do just that and continue to squeeze maximum enjoyment from the show, but for the more casual fans this first series has been very much a tale of two halves, with the first half dozen episodes standing out from the slightly more clumsily portrayed and scripted story which followed as it ran the risk of descending into run-of-the-mill fare.

English and Japanese audio with English subtitles are your only choices here, no extras on show for this three episode DVD.

6
The second half of Vampire Knight certainly doesn't live up to the first, but some of its plot points bode well for season two.
COMMENT AND DISCUSS
blog comments powered by Disqus