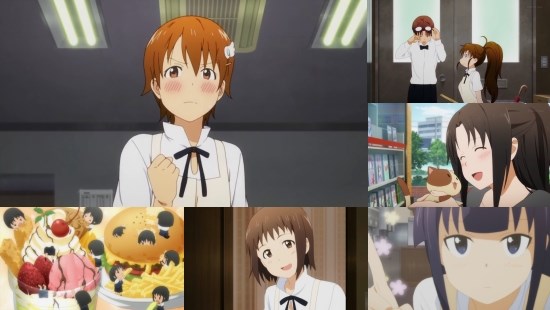 It's always a little tough to review a series starting with its second season, but that's exactly what we're going to attempt here - although the first series of Wagnaria (aka Working to use its Japanese title) is readily available to the US in both streaming and physical forms, we've been left bereft of it here at this point in time sadly.  This is rather a shame too, as Wagnaria is the kind of slick, well-animated and broadly amusing comedy series which has deservedly built up a decent following since its initial airing and release - a statement which is perhaps entirely obvious given that it's had a second season commissioned at all.

For those unfamiliar with the series, Wagnaria is a slice of life comedy of sorts set mostly within the confines of a family restaurant which goes by the same name as the show's English title - a restaurant whose staff are made up of a collection of oddballs of various kinds, as sitcoms so often tend to be.  Our view on the restaurant is initially introduced via Takanashi, a high school boy with a fascination with small, cute things - a fascination which leads him to work at the restaurant after being asked to do so by the diminutive Poplar who is actually a similar age to him despite her stature.  Starting work at Wagnaria, Takanashi finds himself working with everyone from an androphobe who punches any man who comes close to her through to a manager who spends her day eating parfaits made for her by another staff member.  Even the male employees aren't exactly what you'd define as normal, with even the restaurant's head proving to be a wayward soul who spends his days searching for his missing wife.

The problem for anyone planning to come cold into this second season of the series is that its predecessor does so much to build up the relationships between various characters that you might find yourself feeling somewhat lost.  While the opening episode of season two tries its best to reintroduce all of the characters and their unique circumstances, you can't really get to grips with or fall in love with them without having seen what's come before.  In short, anyone interested in this series would be well advised to consider checking out its first season before embarking on these new episodes which the autumn brings our way.

For those familiar with the world of Wagnaria however, this new series is rather like slipping into a pair of comfortable old shoes - absolutely nothing has changed in its characters, setting or dynamic, to the point where even the core premises of its gags and humour remain the same.  This leaves the show in danger of simply running out of steam (there's only so much you can do with jokes about Poplar's height or Inami's androphobia), but judging by the first few episodes of this season it seems like there's plenty of life left in the old dog yet.

The reason for this is pretty simple in truth - the show's character roster is brilliant.  Rather than leaning too heavily on old, well-worn anime tropes, Wagnaria manages to bring unique (albeit bizarre) individuals into its fold, and moreover it makes them all lovable and reasonably well-rounded people, quirks and all.  This is backed up with plenty of great dialogue and a well-written smattering of slapstick that can combine to make for a hilarious viewing experience when it hits top form - episode four of this new series in particular is a great demonstration of Wagnaria at its best, leveraging all of its strengths to leave you laughing or at least smiling almost constantly.

Much like another series given a sequel this autumn in Squid Girl, where Wagnaria equally impresses is in its moments where it isn't being outright funny - thanks to its aforementioned carefully crafted characters, the show is still satisfying and fun to watch even when its humour misses the mark or goes missing entirely.  Just watching the staff in the restaurant go about their business is entertaining in its own right, and with a broadly high animation quality on show throughout its aesthetically pleasing viewing to boot.

Given its quiet but soulful successes in its particular field, it's genuinely a shame that we can't currently access Wagnaria's first series on Crunchyroll, as it's a perfect anime to recommend to those who enjoy K-ON and other similar shows of its ilk.  As it is, unless you're willing to pick up an imported copy of series one on DVD you almost certainly won't appreciate Wagnaria to its fullest extent - if you already know what the show is all about however and enjoyed its initial outing, you certainly won't be disappointed here.

You can currently watch Wagnaria!! Season two in streaming form via Crunchyroll.

7
Fun characters and some sharp comedy writing makes Wangaria everything existing fans of the series will have hoped for - it might prove to be too reliant on its first season for newcomers to pick up and view however.
LATEST REVIEWS