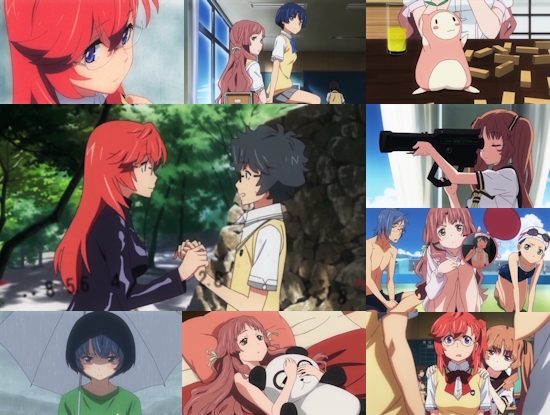 Ahh, the summer. A time for those not yet tied down by the drudgery of the working world and grown-up concerns to roam free in search of love, adventure and whatever takes their fancy without the trials and tribulations of school getting in the way. At least, that is, until a spaceship crash-lands on your head.

Such is the occurrence which kicks off Kaito Kirishima's summer - not that he particularly remembers it, instead awakening in his bed as though nothing has happened. Given this touch of amnesia, it isn't entirely unbelievable to find that his class now contains a new transfer student or that said student, Ichika Takatsuki, has nowhere to stay and needs someplace to go. Fortuitously, Kaito's sister is about to leave on a trip, meaning that Ichika is welcome to stay in her stead.

Needless to say, that little spacecraft incident and Ichika's appearance isn't entirely unrelated, but this matters not as this newcomer to the area finds herself invited to join Kaito's motley band of friends on a summer project headed up by Kaito, as they seek to use the break to film a movie of some kind.

So the scene is set for the season of love, heartbreak and adventure that makes up Waiting in the Summer, and in spite of its sci-fi elements which raise their head here and there the series is, for the most part, more interested in its blend of romantic drama and comedy than discussing the finer points of intergalactic politics. While a burgeoning romance grows despite occasional setbacks between Ichika and Kaito, this is only the tip of a pyramid of tangled and complex relationships as our group of guys and girls all find themselves in seemingly impossible situations that threaten to tear their whole world apart, as teenage romances are want to do. While it would have been so easy for Waiting in the Summer to go down the harem route and have all of the girls fight over Kaito, instead there's a real balance to the cast and their love interests - everyone has an eye on someone who in turn desires someone else, and being a close group of friends they are (for the most part) entirely aware of the disparate nature of feelings.

It's the show's cast of characters that really go a long way to marking Waiting in the Summer out as something special - over the course of the series you can't help but grow attached to each and every one of them in some shape or form, which leaves you with moments of sheer joy or utter heartbreak that mirrors the emotions of the cast themselves as they find happiness, rejection or some kind of bittersweet intermediate state. Although there are certainly traditional tropes to be found within these characters, they are but icing upon well-rounded doughnuts of personality. Mmm, personality doughnuts...

Anyway, I digress - while putting you through the emotional wringer in a way that will surely dredge up some past memories of your own, the series also knows how to have a lot of fun while it's doing it. As previously mentioned, Ichika's alien origins are almost secondary to the core of the series in one sense, but it still proffers no shortage of amusing moments, while one of Kaito's group of friends, the diminutive and mysterious Remon, is there as nothing more than a trouble-maker who is delightfully fun in everything that she says and does, from getting the characters drunk onwards.

With superb character designs and backdrops, the show also looks the part too; even if nobody outside of Japan has an opportunity to enjoy it on Blu-Ray, this DVD release from MVM Entertainment is more than acceptable. With no English dub of the series, it's left up to the Japanese voice cast to do their thing alone, which they do excellently, with Kanna's voice actress Kaori Ishihara in particular doing a superb job of an emotionally charged role. We also have no complaints about the subtitles here either, making this UK release of the show as solid as you could possibly hope for.

Although Waiting in the Summer can't lay claim to being the best romance-led anime of recent years - its first episode is a little clumsy and it arguably takes a little while to warm up sufficiently - it certainly comes close, and in terms of UK-specific releases I can't think of another series that can claim to be as emotionally charged yet still as hugely entertaining as this one. Even at the second time of viewing a handful of scenes left me in tears while others left me laughing out loud, and once you look past its sci-fi angle there's an utterly human heart to the show which succeeds because its depictions of love, be they unrequited or otherwise, feel so realistic that they burn hard and bright, catching in your throat and pricking at the back of your eyes - you feel for these characters because you know and understand their pain and happiness, because you've been there and experienced these emotions for yourself. In a genre where it's often hard to relate to the characters you're watching on screen, Waiting in the Summer is an absolute gem that it's worth waiting any number of seasons to own on DVD.

9
You'll laugh and you'll cry as it toys with your emotions - this is a love story done right and its story-telling, characters and emotional payload will all drill into your soul. A must-own.
COMMENT AND DISCUSS
blog comments powered by Disqus