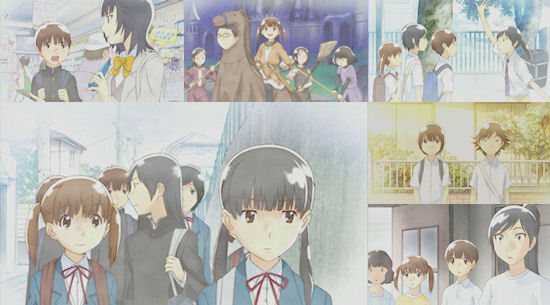 It doesn't happen very often, but occasionally an anime series comes along that makes me want to abandon any attempt at verbal discussion or dissection in deference to simply prodding people with a stick while relentlessly demanding that they "just watch it".  Wandering Son is one of those rare beasts, if only because of its sumptuous visuals - we've grown used to cooing over the beautiful works of Makoto Shinkai, but this series somehow manages to take that kind of eye-popping wonder to another level by injecting it wholesale into a TV anime, with stunning results.

As we discussed in our review of the first few episodes of the series however, there's more to Wandering Son than just eye candy, with a slightly confusing episode that jumps in with both feet some distance into the manga it's adapted leading in to some solid, well written and thought out slice of life drama with a gender identity twist.

After setting up its tone, premise and various character interactions in those early episodes, Wandering Son actually eases up on how heavily it leans upon the cross-dressing component of its story - yes, it's still very much present and correct throughout, but the series manages to plumb a lighter and more universally recognisable view of puberty and growing up as its main characters becoming more concerned with stuff like spots and falling in love.  Aside from its serious moments (and there are plenty of them), the middle section of the series in particular is rich in humour, with beautifully timed reaction shots, hilarious quips (usually from the dry cynicism of Chiba) and funny visual gags.

What really sets Wandering Son out from the crowd however is what it does with its characters during the course of the series - as the show rattles through over an entire year in its eleven episodes (with its original episodes ten and eleven combined into a single instalment to all-but close out the series due to the pressures of recent events in Japan), we see its characters develop, grow and mature considerably, with the penultimate episode in particular used as evidence of Shuuichi Nitori's growth while even supporting characters evolve in their behaviour and opinions in occasionally fascinating ways.

If you're a fan of action and massively overblown drama, then it probably goes without saying that Wandering Son certainly won't be for you - if you can appreciate a show which embarks upon a more measured study of its characters and their circumstances however, while still generating some superb human drama and comedy in its own right, then this a fantastic work that deserves to live long in the memory.  This sharp eye for the human condition, and in particular the trials and tribulations of growing up, creates a series filled with excellent characters that you can empathise with or ponder the intentions of - positives which make this a must-watch series in its own right, leaving the jaw-dropping art style to serve as a delicious cherry atop this perfectly baked delicacy.

9
Wandering Son looks beautiful, but more importantly it delivers great characters and a superb slice of comedy and drama beneath that gorgeous exterior. Put simply, this is one of the year's must-watch series.
COMMENT AND DISCUSS
blog comments powered by Disqus