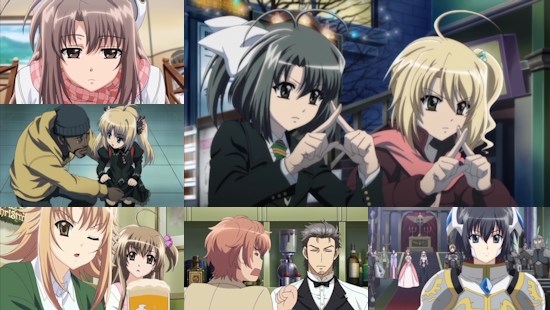 We Without Wings - Complete Series Collection

Animated adaptations of visual novels tend to fall into two categories - the memorable, such as Clannad, Steins;Gate and ef, and the rest. In other words, it's a difficult genre to make your mark in, not helped by the need to excise most if not all of the sexual content often present in the source material. So, with that in mind, how does this new MVM Entertainment release fare in bringing We Without Wings to the small screen - will it soar to new heights or flap wildly before crashing to the ground?

If nothing else, the series is happy to flaunt its ambition from the very start, pouring out a cornucopia of characters onto the screen in a variety of different roles and settings from high schools to restaurants to crepe stands. Picking through the cast that litters the show's proverbial stage however, we hone in upon three male individuals - energetic and passionate magazine writer (I like the guy already) who also works part-time in a restaurant Shusuke Chitose, the cold and distant Hayato Narita, and ordinary school boy Takashi Haneda.

Following Hayato in particular meandering around the city of Yanagihara as a kind of odd-job man, the first thing the series feels comparable to is Durarara in its overall setup as it throws you into the midst of its hustle and bustle while granting the viewer glimpses into the lives of a number of individuals. Unfortunately, that's where any favourable comparisons to the aforementioned series come to a swift end - while Durarara is an expertly weaved tale full of strong characters, We Without Wings is conversely a mess of sexual humour, fan service and detestable individuals. This is personified by Hayato himself, who has no problem calling every girl he meets a bitch or a wench, which pushes the idea of his abrasive personality a little too far.

Even if you keep up with all of the scenarios and characters that the early episodes throw at you, the series only becomes more and more incomprehensible the longer that it goes on - it takes quite some time before some of the show's underpinnings are mapped out to any degree, and ultimately Takashi becomes the centre point of the series as his normal life melds in with an some unexpected fantasy world elements which would be interesting if they weren't so atrociously handed. The more its story develops, the more We Without Wings fails entirely to keep any kind of grasp on its narrative, and by the time things begin to wrap up the series has frankly ceased to make any sense whatsoever. It's hard to even fathom whether this confusion is deliberate or not - at times, We Without Wings revels in the nonsensical, a tendency perfectly demonstrated by a scene where a character leads a food fight while singing about penises. Yes, this really happens. Although we're all for a little random craziness, this is a series that really doesn't seem to know how best to utilise such moments, instead only contributing further to the feeling that the show is a narrative mess and reverting to simply shouting out random nonsense fast and loud in the hope that this will somehow make it funny, whereas in truth the series rarely raises more than a smile.

If you're not particularly interested in the story and only want to hone in on the fan service, the news is perhaps a little better - the series is nothing if not dedicated in its pursuit of glimpsing female underwear, doing away with any pretences that there might be any other reason for watching the series and going straight for the crotch-level and low-angle shots from the very start. There's actually a rather impressive array of female underwear and lingerie on show here, offering a variety rarely seen in this kind of show and leading us to suspect that the production crew spent more time flicking through lingerie catalogues than actually writing or revising the script. The series even has the guts to offer some slices of full nudity and one straight-up sex scene, a rarity for an adult visual novel adaptation but perhaps something that We Without Wings should have embraced even further given its target audience.

Thankfully, this fascination with the female form and what lies beneath any outer clothing is backed up by some respectable visuals - We Without Wings can't boast anything spectacular and threatens to come unstuck when occasional action scenes or fantasy scenarios are required of it, but in general its pleasing and attractive character designs and overall visual sensibilities serve the series well. The Japanese and English voice casts also throw plenty of energy into the melting pot to power the series along, none of which is enough to help the show make the slightest inkling of sense but you have to give them points for delivering such incredible nonsense with gusto (even if that gusto includes using the phrase "epic fail" in the English dub - shame on you, FUNimation).

For a period whilst watching its first disc, we were all set to label We Without Wings as perhaps the worst anime we'd ever had the misfortune to watch - its story-telling is inept beyond compare, its characters run a narrow gamut from frustrating to detestable, and almost every aspect of the series is liable to have you pondering what the melting point of a DVD is so that nobody else would ever have to suffer the misfortune of watching it. There are, however, at least some mitigating reasons for wanting to watch the series - its sexual humour is terribly forced and often cringe-worthy, but if you're only interested in the fan service then you can probably add some points to our final score as its dedicated to the cause and varied enough in its titillation that it might push your buttons. There are also some moments late on in the show where it almost stumbles into the territory of being likeable - it has an interesting idea or two hidden beyond that incredibly poor execution of its story, and it manages to create one or two moments of comedy that actually raise a smile.

If that sounds like us damning We Without Wings with faint praise, then it is exactly that - if you want a strong story or characters that you can get behind, then this show fails utterly in delivering either of them, and its almost astonishing how a series that has been written and crafted so incompetently ever managed to appear at all without being consigned to a screenwriter's dustbin. If you're a sucker for peeking at girls in their underwear (we're talking about anime girls, naturally) or get a kick out of lots of randomly shouted humour then you might find enough to justify watching this torturous attempt at spinning a complex yarn. Otherwise, avoid.

English 5.1 and Japanese stereo audio with English subtitles. Extras consist of US cast commentaries for episodes 4 and 8, textless opening and ending credits and trailers. Alongside the twelve episode series, this release also includes the OVA episode "More than 90% Flesh-Toned".

3
An irredeemably bad story and terrible characters, propped up only by its cast's varied selections in lingerie.
LATEST REVIEWS