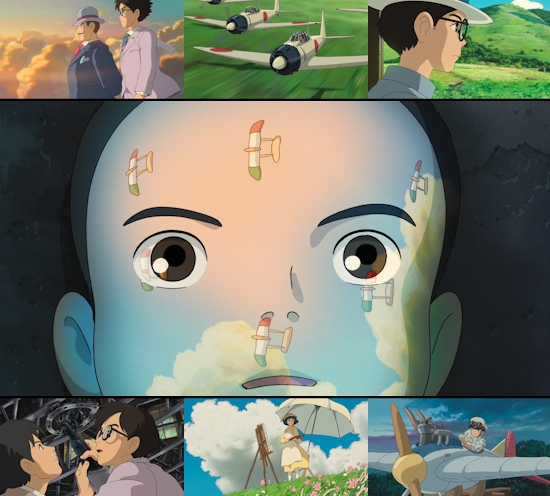 It would be impossible to overestimate the significance of Hayao Miyazaki's work and career within the Japanese animation industry - flick through the history of the business, and you'll find his name cropping up time and again during pivotal moments in its growth and rise to prominence, culminating in his elevation to becoming seen globally as the master of his craft time and again thanks to his efforts at Studio Ghibli. With that in mind, it's not surprising that Miyazaki's latest, and seemingly final, retirement from feature film direction has sent reverberations throughout that industry. What next for Studio Ghibli? Can it even continue producing new content without its well-known figurehead?

Those are questions for another day however, as for now we can focus on the UK home video release of Hayao Miyazaki's final feature film as a director - The Wind Rises. Again in keeping with so much of his career, the film's content has proven to be contentious and much discussed, and if nothing else it's clearly a work in which Miyazaki has invested himself enormously to create easily the most personal project of his long career. That makes the film fascinating for scholars, but how does it stand up as a viewing experience?

Given that this fictionalised biography of engineer Jiro Horikoshi is all about daring to dream, it's appropriate that this film begins with just such a dream, as a young Jiro dreams of flying; an experience filled with both good and evil as the sky he marvels at also provides a home for unknown menaces, while flying very quickly and easily turns to falling.

As we follow Jiro through the formative years of his life, it's clear that there is something special about him. His love of aviation is certainly unique in itself, but so too is his attitude - he thinks nothing of squaring up to some bullies, while the Great Kanto Earthquake also sees him helping others without a second thought and with no expectation of a reward in return. Having built a picture of a young man determined to carry out whatever he puts his mind to, and determined to live by the words of a Paul Valéry poem, "The wind is rising! We must try to live!", it's no surprise to see Jiro achieving his dreams of working as an engineer and forging ahead in spite of the seemingly archaic technology available to Japan at that time to create innovative and cutting-edge designs. The pinnacle of his work as an engineer also sees him experience the joy and pain of love, as an intense relationship with a girl named Nahoko accompanies his completion of work on the Zero fighter project.

This, of course, leads us to the major point of controversy and debate within the film - yes, Jiro is a genius who uses his genius to create aircraft of true elegance and beauty, yet those craft are ultimately tools for war, death and destruction. Jiro knows this yet continues with his work regardless, seemingly regarding his art as more important than the ramifications of his creations - does this make him just as evil as those who uses his machines for their own deadly ends, or is his purity as a creator so sacrosanct that no shadow can be cast upon his work?

Any attempt to fully answer this question as it's presented within The Wind Rises could easily fill a book in its own right, and Hayao Miyazaki's treatment of Jiro is an absolutely fascinating one. The film never dodges the ultimate fate of the Zero fighter or what it was used for - the film ends with a "graveyard" of Jiro's aircraft, utterly destroyed - yet both the man himself and the film's aesthetic suggests an innocent naivety to proceedings as they pan out. This almost childlike view of the world is perhaps best demonstrated by the film's scenes depicting the Great Kanto Earthquake - a demonstration of the violent, destructive nature of the Earth that is presented in a fashion more reminiscent of a supernatural creature from one of Miyazaki's other movies. This doesn't hide the destruction the earthquake causes, but it does compartmentalise it as something otherworldly and thus beyond the protagonist's understanding. It's a tool that The Wind Rises seems to use whenever the prospect of destruction comes about, be it human or otherwise - the sound design and visuals of military aircraft also have a childlike quality to them as they chug their way across the screen, which peels away the horror of what these machines were built for through a lens of innocence.

Whether this naiveté is Miyazaki's or Jiro Horikoshi's is open to interpretation, and this blurring of the lines between the subject of the film and its creator is evident throughout - when Jiro, or Italian engineer Giovanni Caproni via his dreams, are talking about what is required to become a creative genius, one suspects that it's actually Hayao Miyazaki talking and perhaps trying to sum up his own career in the form of his final film.

Putting such scholarly debates to one side however, The Wind Rises is a stunning and exquisite film - even set against Studio Ghibli's other impressive works the sheer scope of its visuals is truly magnificent to behold from as it takes in a growing, changing Japan before shifting its focus to Germany for a spell. The wide ranging vistas that this provides is a feast for the eyes, matched only by the film's attention to detail - both human and mechanical - throughout. As a swansong film for its director, any future incumbents at the studio which he effectively made his own will have a hard time topping it visually.

Another of the film's curiosities is its audio score - recorded entirely in mono at Miyazaki's demand, the soundtrack accompanies the film and its period setting perfectly. The use of human voices to represent many of the aircraft noises and the like throughout the film can seem odd, but again serve to fuel the naive outlook of Jiro that we discussed earlier.

Also on the sound front, we have to confess our preference for the English dub of The Wind Rises - while Miyazaki's hiring of good friend and fellow director Hideaki Anno to voice Jiro makes sense in terms of that character's personality, he doesn't give a performance that could be called enjoyable, and Joseph Gordon-Levitt's English take on the character is far more natural without losing the core of that character. The rest of the cast are equally competent across the two language tracks give or take some slightly ropey German and Italian accents in the English dub, but given Jiro's importance to the story the English version is where it's at overall.

As for the actual content of the film itself, it probably goes without saying given our discussion thus far that this isn't your more typical Studio Ghibli family film - The Wind Rises is squarely aimed at an adult audience. Your enjoyment of the film will hinge on a number of things - primarily your interest in Hayao Miyazaki as a director and a person rather than simply his output, and your interest in pre-World War II Japan. If you have sufficient interest in both of these topics, then the result is a wonderful film - a movie that can sometimes be hard work to watch as it flits from place to place or between dreams and reality, but one that is undoubtedly rewarding if you invest it with your full attention.

This isn't a movie for everyone then - some simply won't engage with its subject matter, others will feel aggrieved by the treatment of that subject matter - but as a farewell to Hayao Miyazaki from feature film direction you really couldn't ask for anything more; an intensely personal film which offers a window into the drive and believes that have underlined his successes for many decades, and as a result stands up to multiple viewings as you try to piece together what it says about this master of his craft. It may not hold the popular appeal of a Spirited Away or My Neighbour Totoro, but The Wind Rises is nonetheless a film that will be dissected and discussed long, long after his creator is no longer with us, just as we're still discussing the work of Jiro Horikoshi even now.

English and Japanese mono audio with English subtitles. Extras consist of trailers, picture-in-picture storyboards, and footage from a press conference with Hayao Miyazaki and Hideaki Anno following completion of the film.

8
Hayao Miyazaki's final film is his most intensely personal, and also provides the most sumptuous visuals we've seen from Studio Ghibli yet.
COMMENT AND DISCUSS
blog comments powered by Disqus