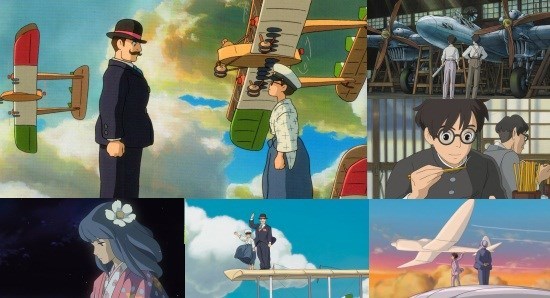 Few, if any, involved in the anime industry have ever managed to achieve the success, the acclaim, the sheer mastery of their art that Oscar winner Hayao Miyazaki can boast during his incredible career. Now in 2014, we are finally being brought face to face with his latest last film (though it remains to be seen just how permanent his latest retirement will prove to be), the critically acclaimed yet also critically slammed The Wind Rises. Should this in fact prove to be Miyazaki's final film, will it prove to be an outstanding example of his undeniable talent?

The Wind Rises is a heavily fictionalised biography of the life of Japanese aircraft designer Dr Jiro Horikoshi, and takes place from his early school days through to his thirties. From a young age Jiro has a huge love of aircraft and dedicates himself to being an aircraft designer, having resigned himself to the fact that he will never be a pilot due to his eyesight. Supporting his vision is Italian designer Caproni, who speaks to Jiro through a series of dream sequences and encourages Jiro to pursue his visionary ideas. As the story of the film progresses we see the triumphs and failures of Jiro's career with Mitsubishi, who hold him in high regard and place him as the lead designer for a variety of fighter plane projects. We also see a much more intimate side of the character as he meets and eventually marries the delicate and beautiful Naoko Satomi.

If the synopsis I've given here feels brief, then that's because the narrative of the film is relativley fragmented. Rather than providing a typical start to finish story, The Wind Rises works almost as a series of vignettes highlighting the more dramatic moments of Jiro's life. Whilst this does allow for the story to keep moving forward and cover a lot of ground (and also apes the style of the kind of biopic you might see coming from Hollywood), Miyazaki has unfortunately not managed to get the balance right here and it becomes difficult to become involved in the story or its characters. This is not helped by the fact that the film never clearly signposts either the jumps in time or when what we are seeing is only in Jiro's head. The result is a film that never actually manages to fully engage you, and plot limes that should be grabbing you emotionally - particularly Naoko's - never really have the power that they might otherwise have done. Its really disappointing, especially as this has clearly been a very personal story for Miyazaki to some extent, epitomising his love of aircraft and distaste for conflict.

This isn't to say that there is nothing of value here however. The animation is Studio Ghibli at its finest, with a staggering amount of motion and detail present in every sequence. The best of this is - as you might expect - the graceful, beautiful sequences involving the planes themselves, which are just staggeringly gorgeous to watch and call instantly to mind the glorious work Miyazaki accomplished in Porco Rosso. A sequence set at a secluded hotel becomes the stand-out moment of the film and at the same time the most Ghibliesque, as Jiro and Naoko's romance is played out without montage or dialogue as Jiro uses his skills as an engineer to build a delicate paper aeroplane to throw to Naoko, who is on a balcony apart from him. It's a truly beautiful sequence and has an incredible emotional punch to it. This is the scene in which you can really appreciate just how great a master of his craft Miyazaki is, and you may find yourself wondering what a full-on romance movie from him would be like. Elsewhere, a representation of the earthquake that struck the Kanto region in 1923 and devastated Tokyo proves very evocative as rolling earth and raging fires ravage the city. You also have to give credit to Miyazaki for producing a much more adult film that he's ever attempted before, both in terms of the content and also the relationships between his characters, which are far from the "Disney-style" relationships seen in many animated works.

So given everything we've discussed about the film, here's the kicker; the thing that I've been desperately trying to not have to deal with and to talk myself out of since seeing the film... my feeling that this is by far the weakest film Miyazaki has ever produced. There. I said it. I so desperately wanted to like The Wind Rises - I tried to convince myself that my expectations were too high, that my disappointment over Miyazaki's latest retirement had tainted the film for me and that I was being too harsh, but in all honesty that just isn't the case here. The story doesn't manage to gel together and is just utterly unbalanced and disjointed - the run time, at over two hours, is far too long and you'll be shifting in your seat before the end.

The Wind Rises is currently screening in cinemas around the UK.

6
This is not the triumphant send-off for Hayao Miyazaki that we were hoping for.