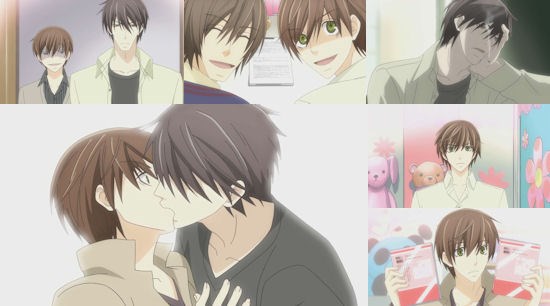 Twenty-five year old Ritsu Onodera might be the son of the owner of a publishing company, but he's determined to prove to the world that he isn't simply riding on his father's coat-tails - a desire which sees him quite his dad's firm to join a rival publisher.  The trouble is, he's been assigned to work for the new company's girl's manga department, which is hardly the ideal placement for the cynical, world-weary Ritsu who has sworn never to fall in love again after having his heart broken by a boy who was his senior ten years previously.

So, Ritsu is thrust into the world of shoujo manga, and a department headed up by a brusque, hard-nosed editor named Masamune Takano - a man which Onodera can't help but feel he recognises vaguely, and a person who seems to have recognised him to boot.  Unable to place this strangely familiar face, Onodera thinks nothing more of it... I mean, it's hardly going to be related to that romantic disaster from ten years ago, right?

Thus reads the basic set-up of Sekai Ichi Hatsukoi, or World's Greatest First Love in English, Studio Deen's boys love manga adaptation which is streaming to the UK via Crunchyroll.  Given its target demographic, I think it's fair to say that I'm not really the ideal reviewer for the series, but with a lack of female presence on our staff at the moment I'm as good as it's going to get.  To be honest though - and I'm going to say this quietly so nobody hears - let's just keep it between you and me - I actually rather enjoyed these opening three episodes.

Yes, the actual kissing and "stuff" which goes on with an alarming frequency (you never get this in boy-girl love stories in anime) really isn't my cup of tea, particularly given that most of it at this point is entirely forced and tantamount to sexual assault, but putting that to one side what we have so far is an entertaining and well told story.  Perhaps the most interesting angle of the series is its shoujo manga setting, a backdrop which isn't just for show but actually gets quite a lot of play in these opening episodes to make for a kind of boys love equivalent of Bakuman at times.  This gives us a fascinating insight into the world of manga publication and editing which also allows some room for humour as the department at the centre of the series undergoes a horrific monthly cycle that beings with a light room full of joy and friendship before collapsing under the weight of deadlines and delays to generate a fiery turmoil of anger and tired eyes.

Away from the manga production aspects of the series we have a solid romance story.  Okay, okay, it's key premise is as daft as it is predictable (how could you fail to recognise your first and only love, even ten years later and with a different haircut?), but it doesn't keep up the pretence of two former lovers who don't know one another for too long before moving onto the more fruitful question of whether this love can be rekindled.  To be honest it's hard to imagine given what a complete jerk Takano seems to be for the vast majority of these episodes when it comes to talking to Onodera, but hopefully there's room for some character development and a thawing in the cold war between the two of them as the series continues - although that said the end of episode three throws a rather hefty spanner (stop sniggering at the back) into the works.

While I can't pretend to be an expert on this genre, I'm imagining that this series has quite a lot going for if you're a fan of such works - a smouldering, harsh guy and his pure, innocent underling with a smouldering and growing love between them, bolted onto what is actually a pretty decent story that uses its core setting as well as it does its slightly flimsy romantic premise.  If nothing else, the focus on an older age group within the world of work rather than teenagers in high school is rather refreshing, as is the willingness to confront relationships in an overtly sexual way rather than making a massive deal of even holding hands as too many anime series are want to do.

Again, I can't stress enough that this series isn't for everyone, but even outside of boy's love fans it probably deserves at least a little respect from anyone with an eye for the manga publishing industry or even for a half-decent love story, provided you aren't "weirded out" by watching two guys kissing and the like in your anime.

7
A flimsy romantic concept which has life breathed into it by a very well-used setting and some rapid, reasonably compelling plot progression.
LATEST REVIEWS