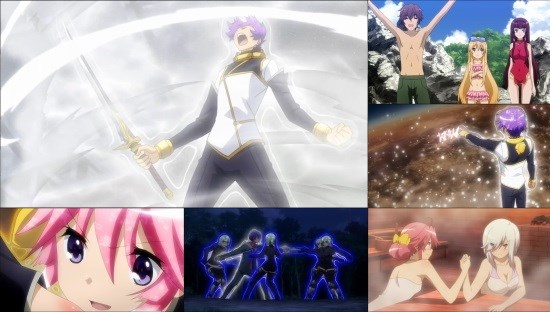 World Break: Aria of Curse for a Holy Swordsman

As varied as anime can be, there are certain times when it falls back on particular trends where it plays things safe. World Break: Aria of Curse for a Holy Swordsman provides an example of this by being another fantasy action series based on a light novel set in a magic high school. The setting in question trains students known as saviors, who get their power from their past lives - being the reincarnation of heroes gives them memories of said past lives and special powers that go along with them. The series shows that students are either magic wielding saviors or more physical fighting saviors based on that past life. In order to make the protagonist of the series, Moroha Haimura, stand out he is given two past lives and access to both sets of abilities that come with them, both being different types from one another as they are. Like other magic high school series, World Break sets itself up as having a school and super-powered students in place in order to fight monsters, although much like most other series of the same ilk it falls into the predictable and tiresome trap of there being conflict within the whole organisation, leading to fights against other saviors rather than the monsters they are trained to fight.

For the most part, the series revolves around Moroha having to deal with certain issues originating from other high-ranked individuals within the school system and world-wide organisation that are somehow threatened by his power. The show also has a few episodes dealing with the cast fighting monsters, which makes the show really feel like two separate entities glued into one. The fights against the monsters, known as metaphysicals, are a rather tedious affair due to how badly animated the fights are against them and how the fights are handled. Within the series Moroha joins a school group whose sole purpose is to eliminate these monsters in a team, yet since these side characters don't have "designated protagonist syndrome" they can never do their actual job, leaving any flashy moments for Moroha to relish in and take all the glory for.

This leads into the other problem that World Break has - the way it sets its protagonist up as being too strong, as basically being a walking power fantasy for the viewer. As mentioned previously, the other aspect of the show in regards to its action - that seems to take more precedence than the monster fighting - is the whole conflict between individuals. The situation pretty much escalates to Moroha vs the World as he goes on a rampage, at one point defeating an entire country full of people. The whole situation behind this is pretty laughable, mainly based on how seriously the anime takes itself with regard to this. The animation of these fight scenes is slightly better than when monsters are involved but that's not saying much.

Within the series magic is cast a weird way in which the words are written and chanted at the same time - this wouldn't be a problem on it's own, but it becomes one due to how quickly the characters cast their spells and how long they are. This leads to instances where the dialogue becomes muffled and too quick to understand due to how quickly a character is chanting a long spell. This also leads to full minutes of animation where the characters are standing still and just waving a finger in front of their faces to write words in the air. The show tries to break this up by having Moroha fight with his sword, but the problem with this is that these fights are over too soon and the series goes back to its magical writing again.

Also as you'd expect from the series of this type, we have some harem aspects to take in, mainly to do with two characters - one of which was Moroha's little sister in his past life, and the other being his other past life's wife. For the most part the harem aspect is handled rather comedically and feels typical for the genre; however it seems like the two main love interests only really take a liking to Moroha due to their previous lives. One of the two heroines does get a bit of relationship development with Moroha, but it's really subtle to the point where it feels like some scenes between the two are left out deliberately in order to give hope for fans of the other girl. There are a few other female characters who try to fight for Moroha's attention and also get into altercations with the two main girls who are closest to him, leading to some rather awkward scenes of the girl competing with each other in strange events - one particular example of note is when two of the girls arm wrestle in a sauna. While these scenes do feel awkward at times, they can be rather funny and help break up the seriousness the main plot is given.

World Break: Aria of Curse for a Holy Swordsman is a pretty typical harem fantasy action series based on a light novel. A show that either does things poorly or competently to the point where there is nothing really memorable about the show or capable of making it stand out. The whole past life concept could have been interesting, but not much development or attention is given to it for it to matter, and the monsters could have also been handled better if not for some rather bad designs and animations used for them, and how little attention these interactions are given compared to people fighting against each other. The harem aspect does have it's moments, but the characters really don't get enough attention or don't make enough impact for things to matter. The result is a show that will not break any records or set the world on fire, but for what it is you could watch much worse.

You can currently watch World Break: Aria of Curse for a Holy Swordsman in streaming form on Crunchyroll

4
Disappointing for those expecting the next break-out hit anime; an okay watch for those not expecting to have their world set on fire.