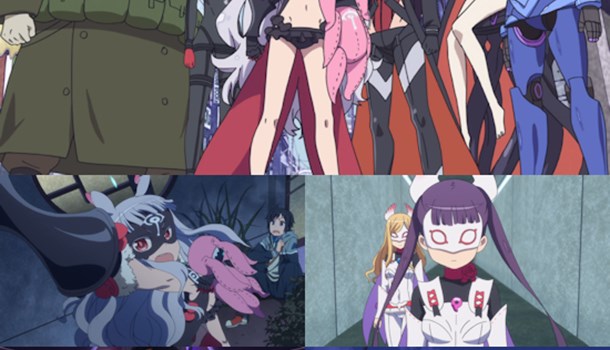 As Tears For Fears once sang, "everybody wants to rule the world". But why is the prospect of conquering the world and bringing it under your control such a vivid and driving one? Well, don't expect this series to be capable of answering that question...

Asuta Jimon is a middle school boy in a bit of a pinch - he's just had a massive falling out with his father that has left him effectively running away from home, except he has nowhere to go, nothing to eat and a curfew is about to come into effect under martial law in his home of West Udogawa (no, that isn't a typo - the series renames Edogawa as Udogawa, although it's fooling no-one).

The reason for this draconian law is the existence of a terrorist organisation known as Zvezda, who seem hell-bent on conquering the area and beyond. This concern isn't particular high in Asuta's mind as he runs into a little girl on a bike named Kate Hoshimiya - little does he know that he's just run into Zvezda's mastermind and leader. It isn't too long until he finds out though, as his curiosity and good-natured attempt to help Kate lands him in the midst of tanks, guns and a giant marauding creature made out of cute little critters.

With nowhere else to go, Asuta reluctantly finds himself becoming Zvezda's newest recruit, joining their fight against whatever tickles Kate's fancy that day while also trying to avoid their nemesis, the government-sponsored agency White Light made up of masked fighters, some of whom look more than a little familiar to our protagonist.

From its synopsis and initial set up, World Conquest Zvezda Plot is a series ripe with potential. The core idea of how a little girl - albeit one with some mysterious powers and equally unusual henchmen - might go about taking over the world and why is a fascinating one, and all of the characters on show throughout the series feel packed with hidden depths surrounding what has brought them to fight for, or against, Zvezda and what it stands for.

Yet, somehow this series manages to singularly waste every element of its series via either poor pacing or a dry, meandering narrative that ultimately barely goes anywhere. The first nine episodes of the show provide flashes of what could have been - a great episode where Kate decides to "conquer" smoking and outlaw it entirely being the highlight - but mostly spends all of its time spinning its wheels seemingly without direction, and by the end of the first Blu-ray of this release you're left genuinely wondering what the point of the whole thing could be.

Foolishly, World Conquest Zvezda Plot has instead decided to pack all of its interesting elements into its final three episodes, providing a barrage of light back stories across its cast (with varying degrees of success) while finally giving us a reason to cheer on Zvezda's plans as it finds some time to ponder the nature of politics and politicians. It's almost as if the writers of the series suddenly remembered that they were making a twelve episode TV series rather than a long-running show with hundreds of episodes to spare, and in a panic crammed all of their brainstormed ideas into the final hour. By this point however, I'd long since mentally checked out of the series - I'd been given no reason to cheer on Zvezda, still felt like I knew nothing about the cast and their motives, and even these improved final instalments couldn't do enough to revise my apathy. Indeed, if anything it only served to cement my impression that the pacing for the series is an utter train wreck, best denoted by a moment where a hot springs outing suddenly leaps to a world where the Tokyo government are extending their influence alarmingly, cramming more cutting commentary and thoughts into thirty seconds than we'd seen in hours previously.

On the positive side of the series, World Conquest Zvezda Plot is a great looking show - character designs are memorable across the board (although admittedly due to the sheer amount of bare flesh on show in many cases), and would-be dull backdrops are rendered in such a way that makes them feel fresh and altogether more appealing. Animation quality remains high throughout too, with a few standout action scenes and a general sense of high quality and detail that pervades the entire production. As a subtitle-only release, there's no English dub here, but the subtitle track is almost flawless and the Japanese cast all fit wonderfully into their roles.

We do have one bugbear with Kazé's Blu-ray release however, as our old friend of chapter marker issues raise their head again. If you want to skip the opening credits with a single button press here - tough, as there's no marker point at the end of the opening sequence, meaning that the chapter skip button will take you to the mid-point of the episode. Every. Single. Time. I thought we were done with such infuriating oversights, but apparently not. Thankfully, the rest of the disc's production is in good nick to assuage my righteous fury somewhat.

Ultimately, it's hard not to come down on World Conquest Zvezda Plot as a series of wasted potential - an original series from the director of Wolf's Rain sporting a grand concept and intriguing characters seems like a sure-fire winner, but the show itself seems entirely unsure what to do with its cast and leaves us instead with a mess of half-formed ideas and possibilities which are never delivered upon. Come the end of it all, we're left with nothing more than a sickeningly desperate sequel hook - we're still none the wiser as to Kate's motivations, and the rest of the cast who we've just spent thirteen episodes gallivanting around with still feel equally like strangers for the most part.

Japanese stereo with English subtitles. There are no on-disc extras on this Blu-ray edition of the series.

4
World Conquest Zvezda Plot is packed with good ideas - it's almost impressive that it manages to waste every single one of them.
LATEST REVIEWS