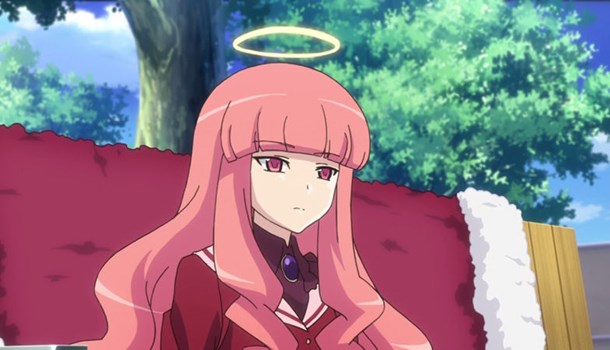 As is probably evident from my previous reviews of the DVD sets, as well as my tendency to witter on about it on Twitter and podcasts, I am a rather big fan of The World God Only Knows (or TWGOK, to save typing so much). While I admit it is not everyone’s cup of tea, something about the premise and in particular the characters just tickles me. The first two TV series were faithful to the original manga to a fault, and were as good an adaptation as you could hope of the source material. As such, please bear in mind this review comes from someone who knows perhaps a little too much about the franchise - I can’t pretend to be coming into this “fresh”!

With that out of the way, how does the third season fare? Does it maintain the pedigree the first two series attained?

Having previously used his obsessive knowledge of dating sim games to to bring love to troubled (and demon infested) members of the opposite sex, Keima Katsuragi finds out that his work is far from done. His childhood friend Tenri, or to be more exact the goddess who lives within her, Diana, tells him that he must find her five missing sisters so he can be free of his life of servitude chasing loose souls from real-world girls. Initially writing off the command, things quickly come to a head as one of the goddesses (who had been hiding inside a classmate) is stabbed by a militant secret organisation that seeks to conquer Hell and Earth. Now working against the clock, Keima has to work to reunite the goddesses and save the life of his classmate.

Lets get the most egregious part of the review out of the way: The first episode of this new series has a massive, ham-fisted timeskip which left me fuming when I first saw it - listeners to the UK Anime podcast will have heard my ire at what was done. In a mere six minutes, the anime skips past a huge swathe of the original material, barely stopping to give it the barest of lip service. The thing that makes this even more irritating is that it also skips past Keima’s initial interactions with a pair of characters who are critical to the storyline that it wishes to show in this new season, doing little more than showing you how their stories wrapped up. You have near-zero time to understand who they are and so when they begin to pop up later in this storyline they are almost complete strangers.

Another problem, although this is more one of availability than the actual fault of the series, is that the two-part special OVA that covers the introduction of a character key to this storyline was only sold as pack-ins with certain manga volumes in Japan. They have not since been made readily available to western audience, so this vital piece of backstory remains unknown to anyone who isn’t already a massive fan of the franchise.

The cuts don’t end there - several characters and their associated subplots are excised from this adaptation of the storyline. While this in itself is not a bad thing, the loss of these details with nothing to replace them removes a lot of the texture and life from the storyline. Everything feels a lot more forced and the more intriguing elements from the original storyline have been airbrushed away. Another casualty of the cuts is a lot of the humour that could be found in the first two seasons, a shame as it would have really helped to break up the more dire and urgent tone of the storyline.

The most galling thing to me, and also I suspect to people who would be coming in to this series fresh, is that despite all these cuts and skips the series still feels rushed. The pacing is breakneck and events seem to crash into one another as the animation jumps from scene to scene with barely time to catch your breath. The relaxed, reassured (some would say ponderous, but not I) pacing from the first two seasons is gone, and its replacement wastes a lot of the charm and warmth of the content by simply barrelling through it. A particular scene comes to mind - in one of the few surviving comedy moments, just as a character begins to vocalise the punchline the camera is already fading to black. I honestly could not stop myself myself laughing for entirely the wrong reason - if you are going to simply burn through the few funny moments you left in and not give time for it to breathe, why even bother?  The rushing around becomes even more frustrating when the series has to backfill information that was already skipped during the very start of the season, making things very confusing indeed.

So, with all this ire out of the way, surely there are some good things to say about the series, right? Well, certainly, there are. The opening and ending themes of this season are somehow even more amazing than those previously, and the show in general uses music really well - this is especially present in the way that it brings back tracks from previous character storylines as well as blending in new tracks. The strong character design from Poyoyon Rock is still in evidence, even if it does look a little phoned in for the newer heroines in the cast, while the animation is always top notch and even manages to just about blend in CG as seamlessly as you can expect on a TV budget.

Despite the speed-up and cuts, the storyline itself is still a lot more engaging than that of previous seasons as it has multiple ongoing conflicts and characters in play at any one time. This makes it all the more a shame that it feels so mis-handled.

There is no shortage of things to like about this new season of The World God Only Knows - the issue is that they are all tied into a single-minded desire to cover a lengthy storyline in the episodes it has available no matter what. While the storyline itself is interesting, this desire leads to the show ditching many things that made the show fun to watch in the first place, especially the humour and the quieter character moments. There are times the things I love about the franchise shine through, but these are mere momentary breaks in the clouds.

You can currently watch The World God Only Knows in streaming form on Crunchyroll.

4
The show is subtitled Godesses, but you'll feel like you've been bedevilled.
LATEST REVIEWS