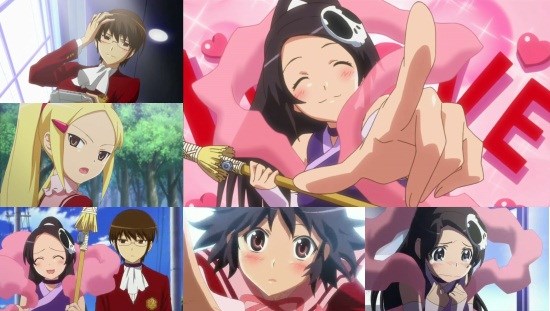 Keima Katsuragi is not just any old geek - he's an expert player of dating sims who wouldn't be seen dead without his trusty PSP in his hands, to the extent that he's now known online as the "God of conquest", such is his prowess at capturing every girl in every dating sim known to man.  The trouble is, such is Keima's obsession with "2D" girls, he doesn't find real girls uninteresting so much as a complete waste of time and space.  When Keima receives an e-mailed challenge to prove his worth and God-like status, he naturally accepts, only to find that his assumptions about this challenge and its reality are rather different.

Thus, before he knows it, Keima is partnered up with a demon named Elsea de Lute Irma (or Elsie for short) and tasked with collecting "loose souls" which have come to the Earth to wreak havoc - a task that he has to complete in its entirety to be freed for his contract, else as punishment he'll instead be freed from his own head.  In truth, this entire premise is only dreamed up for one reason and one reason alone - to create a fish out of water scenario which forces Keima to use his impressive dating sim skills to win over the hearts of living, breathing girls, as we're informed that the only way to cleanse a girl of a "loose soul" that has taken up a place in her heart is by her falling in love and receiving a kiss from whoever she falls in love with.

These opening three episodes take in two story arcs in which Keima's initial resistance to his task is exhibited before he eventually caves in with the realisation that logically speaking, doing what has been requested of him is the easiest and quickest way of returning to his normal life.  Needless to say, Keima sets about his task using his exhaustive knowledge of dating sims - a scheme which proves to be unrealistically successful in the long-term with the girls in question, be it the tomboyish athlete Ayumi Takahara or spoiled rich girl with a hidden secret Mio Aoyama.

While Keima's plans will occasionally raise a smile from anyone familiar with Japanese dating sims and visual novels, much of the show's humour comes from his cute yet supposedly demonic sidekick Elsie, who tries to help Keima to the best of her ability but inevitably only ends up making his life more difficult in amusing fashion which occasionally pokes fun at other anime and gaming tropes in its own right.  Away from the comedy angle of the series, these early story arcs sometimes threaten to descend a little too far into outright cliché, with the show's first episode in particular proving to be annoyingly generic despite the twist it aims to hold over such aspects of the show.  Thankfully that opening proves to be more of a clumsy introduction to The World God Only Knows' premise rather than a sign of things to come, with the following two episodes proving to be far sharper and better paced in terms of both comedy and overall plot progression.

The World God Only Knows' biggest obstacle judging by these early episodes is its characters - Aside from the lovably hapless Elsie, both Keima and the girls he's been tasked with "liberating" aren't really the kind of characters you can easily root for.  This is particularly problematic with our protagonist himself - his attitude and the way he treats the girls he faces as little more than puzzles to be solved with little interest in them at actual human beings is, at times, intensely arrogant and unlikeable.  Admittedly, Keima's behaviour is entirely in keeping with his character as introduced, but it still doesn't make watching him plot how to win over a girl as though she were a handful of polygons any easier.

So far then, The World God Only Knows is a series that has clear potential, but also has a pressing need to make use of that potential to break out from the slight twist on the average arc-based romantic comedy it currently exhibits.  The concept of the show is interesting enough, and with enough room for humour, to deliver in spades but thus far you get the feeling that it's barely stretched itself.  Considering how highly regarded the manga upon which the series is based is held by fans, it seems likely that things will only get better as the series progresses, but for now this is a reasonably entertaining series with just enough good moments of humour and character to keep it ticking over if you can live with Keima's characteristic apathy, but it needs to do more to raise itself above the mediocre.

6
It sports a fun premise and the potential is there, but despite its interesting premise these early episodes never quite shake a feeling of mediocrity.
LATEST REVIEWS