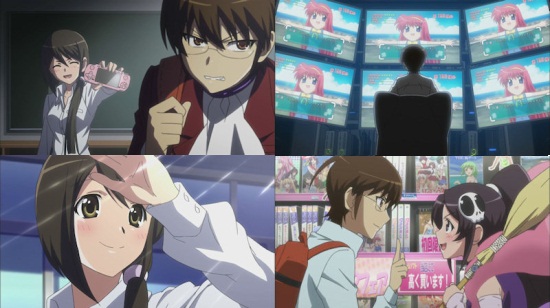 Here we are again, at the end of a second series of The World God Only Knows as the Keima Katsuragi juggernaut continues seemingly unabated in terms of the show's popularity - knowledge which seems to have series production studio Manglobe oozing confidence as its final episode end with scenes which outline Keima's future conquests for a possible third season.

Having checked out the first half of season two in our first review, we rejoin the action via another of the franchise's surprisingly entertaining filler episode, a feature that we've come to enjoy throughout The World God Only Knows as a whole - and let's face it, the words "filler" and "enjoyment" don't go together very often around these parts!

After treating us to a pair of amusing side stories in this episode (and giving new demon Haqua some very welcome additional screen time), the series has one finally conquest for Katsuragi to try his hand at, and it's arguably his toughest assignment yet.  The target of his forced affections this time around is an energetic, overwhelmingly positive student teacher named Jun Nagase - indeed, so enthusiastic is this young charge that upon seeing the dating sim addict Keima playing games in class, she decides to become his saviour by reforming his lonely, ill-advised ways.

Thus, for the first time in this series the proverbial "hunter" seemingly becomes the hunted, as Nagase expends all of her time and efforts upon helping Keima break his gaming addiction against his will.  This turnaround of circumstances makes the most interesting story arc the show has provided yet as all of our supposed heroes plans go straight out of the window - an advent which makes it all the more disappointing when the story certainly reverts to type, puts Keima in his "rightful place" as the guy in charge of the scenario developing in front of him, and serves up an incredibly weak ending to the story arc which feels almost arbitrary in its conclusion rather that delivering anything clever.

It's this ending to its final major arc (before the show closes with another filler instalment that offers up a few giggles but nothing on the same level as previous attempts) which again exposes the critical flaw in The World God Only Knows - for all of the potential offered by its premise and its opportunities to subvert the anime romance and dating sim genres, in truth the series mostly just follows the tropes of those genres to the letter, wrapped up in its Loose Soul collecting packaging.

Admittedly this packaging is great-looking, particularly with regard to its all-important character designs, and this is backed up with good voice acting and a vein of humour which certainly succeeds in lifting the series above the mediocre - that doesn't shake me from my conviction that the series could and be doing more with its premise, even if this anime adaptation is naturally limited by what its manga source material has to offer.

For fans of the series to date, there's certainly nothing to interrupt their enjoyment of the show in these final episodes - if anything, that aforementioned teasing finale will probably have you chomping at the bit for more.  As a slice of well-animated and produced fun it certainly hits the spot - just don't expect it to saunter too far from the well-worn conventions of the dating sims the series apes.

6
Sandwiched between two filler episodes, this series final story arc promises much but delivers an unspectacular payload to ensure it remains as polished fun but little more.
COMMENT AND DISCUSS
blog comments powered by Disqus