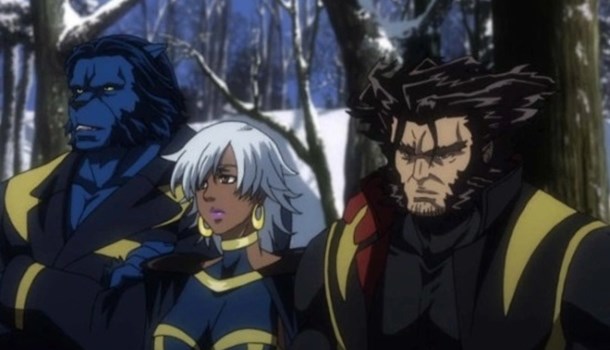 Ever since anime first popped onto my radar, there has always been one thought in the background of my mind – where are all the superheroes? Think about it – the superior technical quality of Japanese animation combined with classic DC and Marvel characters should be a sure-fire hit. For whatever reason though, there are barely any attempts to make this work and what examples there are are… well, they're not great. There was the OK-ish Witchblade series, a fairly average Iron Man series, the dull Gotham Knight shorts, the terrible Batman Ninja, a few different Avengers shows (all of which for some reason thought that fans would be much more interested in some random children as the leads). It’s a list of, at best, average shows. Today's example, 2011’s X-Men, which is now available on Netflix is... well, don’t get your hopes up.

The show starts in the aftermath of the death of Jean Grey. The X-Men have separated, each dealing with the loss in their own way, until the core team for this series – Cyclops, Wolverine, Storm and Beast – are called back by Xavier to head to Japan and look into the case of a missing young mutant. Upon their arrival they discover that Hisako’s disappearance is just the tip of an iceberg involving the abduction and transformation of mutants, which will push them into conflict with both the evil U-Men and some other figures from their past - not least of whom is the former White Queen, Emma Frost!

Let us start with what’s good about the show. Well, the new design for Storm is frankly the best design of the character in the entire history of Marvel. Also it’s really awesome to see Armour in action as she’s always been a pretty cool if less-well known member of the X-Men. And that’s kind of it….

The series is a bungled mess from start to finish. Literally from the start as it turns out – why would you open a series with the death of Jean Grey in the Phoenix Saga? Most of your audience either don't really get the context or is wondering why they didn’t just do the whole thing. Yes it ultimately turns out that they’re attempting to set up Emma Frost as being untrustworthy (despite the fact that this is immediately undermined by both the credits sequences and by instantly revealing that she’s been looking after Hisako the whole time) but it just doesn’t really fit at all. It also doesn’t help that more effort seems to have gone into designing and animating Jean for her 30 seconds of screen time than most of the rest of the characters.

Next on the list is why, out of the entire roster of X-Men characters, would you choose this line-up? Cyclops and Storm are two of the franchises most boring characters, Beast has nothing to do, Emma and Xavier spend most of the show explaining that their powers aren’t working and Wolverine seems to be the least competent close-combat fighter in the world given how rarely he lands a blow (not to mention the fact that everyone is so scared to show a drop of blood that every time he regenerates there's a big black blob on his face to censor it). You would have expected the creative team behind the show to either choose characters that would lend themselves more to the kind of action anime is great at or, given that the intent was likely to give the franchise a boost in Japan, perhaps use more of the X-Men's Japanese and Asian characters.

The story is dull and inconsistent, which is not helped by having the cast regurgitate the plot multiple times throughout the show and made worse by the action which is badly directed and feels like it might as well be in slow-motion. The rest of the animation is frankly little better and the main thrust of the character design seems to have been ‘give everyone bigger boobs made out of concrete so they don’t move otherwise just make everyone really generic’. It’s also full of odd decisions – why is Wolverine in his classic outfit in the credit sequences but never during the actual show (not to mention why is his design totally different from that used in the Wolverine solo series from the same studio and released in the same year?)? Why is a mutant changing form referred to as a transformation rather than just say they’re mutating? Why is the Hellfire Club called the ‘Inner Circle’ for the whole show? It’s all topped off with an awful soundtrack that sucks the life from each and every second of the show and whilst the voice cast do their best, they have nothing to really work with.

The whole thing just is not good enough and this is a Madhouse series – most of their output wouldn’t use something like this as the animatic for the actual show! It was Directed by Fuminori Kizaki for Pete’s sake – the director of Afro Samurai, which oozed cool and awesome action in every frame! You have to ask what went wrong? Did Marvel try to stick their noses in too much? Did Madhouse spend so much on the license that they couldn’t afford to put any actual effort in?

Whatever the reason, the fact remains that this show is just bad on pretty much every level. It’s ugly, over-long and something which should be impossible for an X-Men series – boring. Stick to the classic cartoon on Disney + to see how it's done.