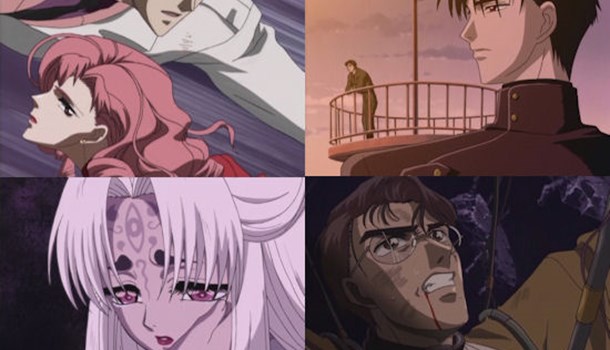 It's taken a little while but at long last the concluding volume of Madhouse's X on DVD is upon us, allowing us to witness whether Kamui will save the world as it stands or whether his rather less kindly twin star will rip it asunder, destroying humanity and rebuilding the Earth anew.  No pressure on our hero then...

After the end of the last volume treated us to some rather touching scenes between the injured Sorata and Arashi, this volume begins with the revelation that Arashi has subsequently gone missing for reasons unknown.  There's little time to dwell on this however, as the battle between the Dragons of Earth and Heaven continues unabated, bringing Aoki and Karen into action yet again while even Princess Hinoto's role in proceedings becomes murky and more complicated than it previously seemed.

Thus, these final episodes of the series brings us a conclusion shrouded in betrayal, the blurring of the lines between good and evil and, of course, that ever-present question of whether a person's fate can be fought against and defeated with sufficient will.  With so much going on and so much similarly still left to decide, these closing instalments should have been packed to the rafters with tension and intrigue, yet somehow the whole thing felt strangely lacking by the time we make it to our wishy-washy ending which feels more like it's treading its path just to "do the right thing" (complete with some arguably deus ex machine moments) rather than to create something genuinely compelling.

Perhaps it's just that X has been so forthcoming in its portrayal of death, injury and misery from the start that tempers the show's finale, as come the end of it all we've seen so much pain and suffering in both mental and emotional forms that it seems almost irrelevant whether the world lives or dies - More likely though is that the series simply doesn't carry the weight and gravitas it attempts to build up through to the end, instead pulling up short and leaving the viewer feeling unsatisfied and more than a little confused about some aspects of the series.

This feeling of disappointment is a real shame - We've been talking up the potential that this series holds throughout, but for all of its visual panache, striking character designs and strong story concept, it's never really managed to meld everything together into anything other than an occasionally enjoyable series.  I don't want to be too harsh on the series as a whole as it does wield the ability to hold your attention and keep you gripped at times; it's just that it doesn't do so often enough to become any kind of classic series or one that you'd want to re-watch, expect perhaps to glory at the top-class animation.

6
A weak and slightly confusing ending means that X never really lives up to its potential.
LATEST REVIEWS