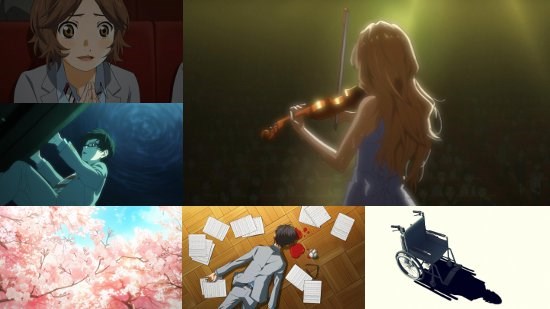 Your Lie in April is, quite honestly, one of the best series I have seen in a long time and the rest of this review will be spent explaining why I think that. Part of me is ashamed I didn’t watch it while streaming while the other part is glad I waited for the physical release so I could binge this whole first half in one go and luxuriate in it.

Arima Kousei cannot play the piano. He used to be damn good at it, so good that it beggared belief and shocked anyone who watched him play. “The Human Metronome” they called him, but then he lost his ability to hear the piano, and the instrument has been gathering dust for two solid years. Now 14 and in his last year of middle school, as Arima’s friends are trying to win in their last school sports tournaments he finds himself at a loose end. Then he comes across a girl playing a melodica in a park, a girl whose personality he instantly writes off but cannot help but be drawn to due to her sheer talent at the violin. Kousei is slowly drawn back into the world of music, but how will it effect him and his dear friends?

This show is a masterclass in so many ways, all of which complement and reinforce each other to make a near unimpeachable whole which also manages to deftly sidestep so many pitfalls that could easily befall it. That isn’t to say it is without fault, but I’ll get to those later.

The most striking thing about Your Lie in April, right from the first second, is how beautiful the show looks. Everything in the show looks suffused with light, even (perhaps especially) in its dark or foreboding moments, there is light that shines through to provide everything with a wonderful gamut of colour and contrast, bringing everything to life. This is especially stunning during the first few episodes, where you have almost Makoto Shinkai levels of cherry blossoms in evidence, blowing freely in the wind. The cast look like true animated people as opposed to “anime characters”, layering on tons of detail not only in how they look but their expressions, tics, habits, and how they move. They also have noses, which is initially surprising (“What is that shadow on their face?”)

The show supplements the art with a great framing, carefully arranging the cast and backdrop with care in every single shot to wring out the maximum emotional punch by showing you just what it needs you to see. You get a lot of very meaningful shots of a small part of a character as something takes place - the lower half of the face (omitting the eyes, of course), a swollen ankle covered in bodged ice packs, a hand idly playing with a mobile flip-phone. This, combined with the sheer prettiness of the show makes nearly every moment something you can screenshot and marvel at. The show is also not afraid to perform stunning throwaway feats of animation that last mere frames - blink and you miss it! One image that still haunts me is when the show shows the main character Kousei figuratively drowning - for a few frames he thrusts his hand out only for it to dissolve in the ”water”, showing just how powerless he is. This is barely on the screen but made a huge mark on me.

Backing all this visual splendor up is the soundtrack which, as you might hope given that the show is about the trials of young musicians, is wonderful. The pieces provided during the actual performances are very strong and by requirement highly reflective and evocative of the drama playing out in the performer, allowing you to draw the meaning and emotion out of your own volition. (A character will inevitably chime in to provide some help with the technical aspects, but it rarely feels like you are being told how to feel, thankfully) The wonderful music does not stop there, and I would personally say that the non-performance background music is in fact the strongest, providing a powerful scaffold to reinforce the already wonderful visuals during emotional or dramatic scenes. It really is something stirring, but also manages to keep some suitably goofy tunes in its back pocket for the comedic moments.

Comedy is another element that the show shines in, and really helps bring Your Lie in April into its own - rather than submerging you in melodrama the whole time it knows when to take a break for a gag or two. In these cases you get some of the most exuberant animation in the show - shorn of its normal character models and utter beauty, characters often mutate into absurd simulacra of themselves and smear their way across the frame at each other. This much-needed levity helps keep the emotional tension in the show fresh, and allows for welcome palate cleansing and gear changes between different plot threads, ensuring the change in focus is not jarring. It also really helps to ground the characters and keep them feeling “human” to the viewer.

The characters in the show really are precious - they are fascinating, flawed beasts who are all striving for something but have a tendency to get mixed up along the way in one way or another, usually due to their own lens with which they view what is happening around them. I very quickly found myself utterly enthralled with each of them very soon after any kind of introduction, and my attachment only grew as the show went on and they exposed more of their inner traumas to both each other and to me as the viewer. There is a lot of “first love” trouble flying around in the series, and as a hopeless romantic I immediately got stuck right in to this element of the show, which it handles well and thankfully does not overdo. A lot of the best character moments are when you are treated to their different viewpoints and have to see events through their eyes, which helps, again, make everyone that little more human.

This human tension - with music, with their own desires, with each other - pushes the series along marvellously. The show feels dense with emotion, but never so thick as to be cloying. As mentioned before, it also knows when to switch gears to prevent the show becoming stagnant, keeping everything fresh and dynamic as you barrel through multiple interwoven conflicts. I spent almost all my time watching the show with a sentimental lump in my throat due to how deftly it covers a wide range of emotional traumas, moving effortlessly between them and ensuring none of them wore out their welcome. It ranges so far, touching on the complex interactions of family, child abuse, betrayed expectations and wishes, missed connections, trust, and even the simple admission that you have hangups around these or other issues. The show presents a strong case in each dramatic scene it tries its hand at, again bolstering the realism and empathetic link with the cast. One slightly odd element of the drama is when you are reminded that the main cast are all around 14 and even taking into account various flaws and hangups they are the most rational 14 year olds I have ever known, especially given those hangups!

As I threatened earlier, the show is not without faults. One blemish is how the show’s pacing and balance of tension falters during the competition in the second half of this set - the show has a lot to show you and does a lot of jumping around to get it all in front of you, including sometimes repeating itself with a few details changed in subsequent episodes. While this does re-enforce the gravity of the competition and the new characters introduced therein, it does manage to monopolise and slow down proceedings slightly. The other fault is the the increasingly grim and inelegant hints the show drops about a character’s health culminating in a massive clanger dropped at the very end of this set in, of all things, a peanuts quote. I hope this last item is relaxed in the second half of the series. A curious pattern that the show exhibits is to have frequently young children present on the sidelines of emotional events so they can react to events playing out - a very small dot-eyed greek chorus, almost. Once you notice this it is slightly hard to not have it stand out to you!

This set also includes an English dub, which is entirely serviceable, if unremarkable.

As mentioned at the top of the review, this first half of Your Lie in April is some of the best anime I have seen in some time. Heck, the first four episodes alone would make a great standalone movie. My only hope at this point is that the second half can continue to deliver in such a comprehensive fashion and pay off all of its hard work setting up its wonderful cast.ubaki is the best

English and Japanese stereo audio with English subtitles. Extras comprise an audio commetary on episode 1 by the dub's ADR director and a selection of the dub voice cast, and clean opening and ending credits.

10
Beautiful, heartfelt and undeniably one of the best anime of this year.
LATEST REVIEWS