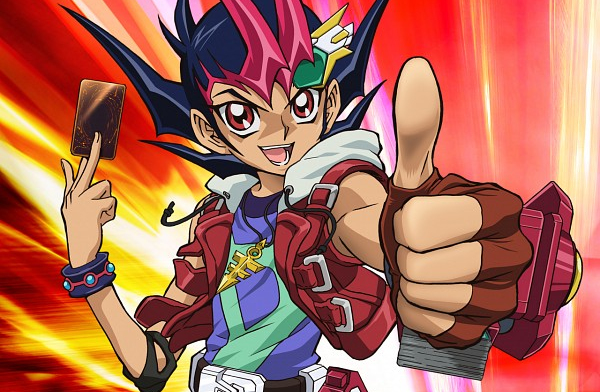 Yu-Gi-Oh! Zexal is the fourth main series of Yu-Gi-Oh!, a series based on the popular Yu-Gi-Oh! trading card game which exists in both the anime and in real life. Though in the series the game is referred to as “Duel Monsters”. Yu-Gi-Oh! Zexal follows Yuma Tsukumo, a middle school duellist who likes to take on any challenge, even if there’s every chance he'll fail. One day, whilst duelling, the key he wears around his neck begins to glow and from it appears an alien ghost only Yuma can see.  The ghost, named Astral, has lost all of his memories, which ties into the disappearance of 'number' cards. These are special cards, which contain special effects that can influence the card holder's behaviour. Now Yuma and Astral must work together to track down the missing ninety nine number cards, and thus restore Astral's memories.

Yu-Gi-Oh! Zexal sets itself up with a plot similar to shows like 100 Deeds for Eddie McDowd and Nyankoi, where the main character has to search for 99 of something in order to regain what they lost. Initially the series presents this in typical shōnen fashion, with each episode being of the traditional ‘monster of the week’ format. The twist here is that this is done with duels and each of the duellists has a ‘numbers’ card, which Yuma and Astral need to collect. These take a rather rote and predictable format: Each episode sets up the character who has the number card; Yuma starts a duel with them; he finds himself in trouble, which in turn leads to the episode ending on a cliffhanger; then the next episode has Yuma make a comeback to win the duel. For those familiar with Yu-Gi-Oh! this format shouldn't be anything new: Most of Yu-Gi-Oh! revolves around the hero facing up to insurmountable odds, then finding a way to overcome them. Yu-Gi-Oh! Zexal's downfall is that most of these situations arise from Yuma's stubbornness and lack of skill.

Yuma is by far the least accomplished protagonist in any Yu-Gi-Oh! series, at least in terms of skill regarding the game. This wouldn't be so bad if he was willing to listen to advice others offer him regarding the game. It becomes really frustrating at times to see Yuma almost lose the duel, as he refuses to listen the advice of Astral. Who, despite suffering amnesia, still manages to understand duel monsters well enough to suggest winning strategies. Thankfully, Yuma breaks out of this bad habit after the first major arc, thus displaying a bit of character growth while also developing his duelling skills.

After this, in typical Yu-Gi-Oh! fashion, the show leads into a tournament arc. Where not only are there duellists with number cards gathering, but two other opposing factions are hunting down the number cards for their own reasons. While this could have been interesting, the whole thing has far too many clichés to make it stand out. This in turn leads to Yu-Gi-Oh! Zexal's biggest issue: The characters are either annoying or dull. It could be said that Astral is the best character in the show, given his occasionally amusing reactions and gradual character development. From the antagonist side Kite could also be seen as an interesting character, though he is a sympathetic villain due being manipulated into hunting the number cards. Everyone else in the show is either one dimensional or has annoying character traits, that can get rather tiresome. This is particularly true for Yuma, who has been given an incredibly high pitched whiny voice in the dub. This can get rather irksome when combined with his signature catchphrases, which include: “Get set to get decked”, “I'm feeling the flow” and “I'm going to High-five the sky”.

The portrayal of the card game itself is handled in a somewhat odd way, as the show expects the viewer to know some of the rules of Yu-Gi-Oh!/Duel Monsters yet constantly reminds you of others. In this series a new summon mechanic was introduced known as xyz(eks-eez) summoning, which has a rank instead of level. The show will constantly remind the viewer of how an xyz summon is utilised in the game, by reminding the viewer through dialogue how to do it. Yet, there is no episode which teaches the core rules of the game, such as how a turn is constructed. Though these can mostly be inferred by watching the duels.

For the most part the duels are rather fun to watch, especially when they break from the tradition of Yuma pulling off a seemingly unlikely comeback from the brink of defeat. However, Yu-Gi-Oh! Zexal falls into the same pitfall as other series in the franchise: That a character will often miraculously draw the exact card they need in order to win. In terms of tone things are pretty light hearted at first, but the series gets more serious as it moves into the tournament arc. That being said there are a few joke episodes mixed in to remind the viewer this is a light hearted kids show. The best examples are when Yuma duels a farmer, who forces him to eat vegetables before he is allowed to attack, and when the show's resident cat-girl duels a talking dog.

The release itself is very minimal, providing just the English TV edited version of the series in a DVD only format. Audio wise this set only contains the English dub, which is a very mixed bag. Yuma's voice is rather annoying and some of his dialogue is very odd. If you've seen any other Yu-Gi-Oh! dubs then you may be glad to know that the usual quirks are all present. Purists who wish for a faithful translation may be disappointed, since the dub takes a few liberties. There are no extras, not even a subtitle track for the hearing impaired. The saving grace of this release is that you get a rather substantial number of episodes, forty nine to be exact, spread across six DVDs.

Overall this show is every bit a member of the Yu-Gi-Oh! franchise, it houses all the same tropes, clichés, and shortcomings. Even then there are few things that let it down compared to other Yu-Gi-Oh! series: The annoying protagonist, bland cast of characters, and bare bones release to name but a few. The show's dub, whilst having some great moments of comedy, can really break the viewer’s immersion. However, the show gets the duels right and it has some charm, you also get a lot of episodes for your money. If you're not already a fan of Yu-Gi-Oh! then this won't be the show to convince you otherwise, but for those familiar with Yu-Gi-Oh! and wanting more then this will scratch your itch.

6
A bare bones release that fans of the show will enjoy, but it won't win over newcomers.
COMMENT AND DISCUSS
blog comments powered by Disqus