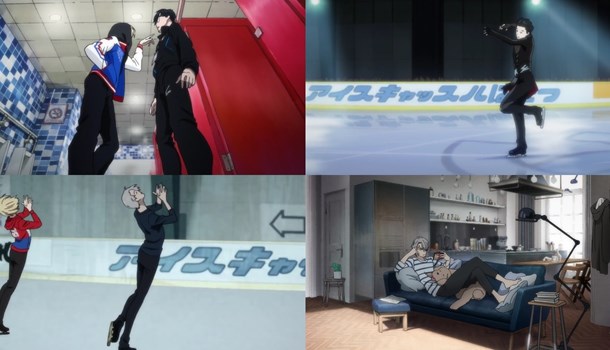 This threat, followed by more failures, makes Yuri Katsuki decide to put his career on hold. After graduating from college in Detroit, he returns to his hometown in Japan. Yuri moves back in with his parents who run a hot springs resort in Kyushu. Yuri catches up with his childhood friend Yuko at an ice rink, where he perfectly mimics a skating routine performed by his idol Victor Nikiforov. Unbeknownst to Yuri, he has been secretly filmed, and the footage of his performance gets put online. The video goes viral, eventually even catching the attention of the famous figure skater Victor Nikiforov himself.

Suddenly, Yuri's quiet hometown is shaken up when the legendary Russian figure skater Victor Nikiforov suddenly shows up at his parents hot springs resort. Without asking any questions, Victor simply announces he will coach Yuri in order to get his career back on track and unlock his full potential. This is much to the dismay of Yuri Plisetsky, who wants Victor to help him instead. The battle for who gets Victor as their coach is only the start of the rivalry between the two Yuri's, as they will face each other and other figure skaters in order to win the Grand Prix.

The plot is that of a typical sports anime: the main protagonist suffers defeat and must face many obstacles in order to make his way back to the top, making friends and enemies along the way. Yuri!!! on Ice stands out due to a captivating plot - even if you don't have strong feelings about figure skating, it's hard to not feel riled up and as passionate as the main protagonists. The rivalry between the two Yuri's is almost palpable. The series has some comedic relief, as well as hinted love interests between the mainly male cast, but the overall tone of Yuri!!! On Ice is serious. Rather than portraying unhealthy romances existing solely for fan service purposes, relationships between characters are equal and consist of mutual respect and understanding.

What perhaps stands out most about Yuri!!! On Ice is the impressive animation. When on ice, Yuri's performance flows beautifully. Even if figure skating is not for you, it's hard not to be captivated by Yuri's performances, or that of the other figure skaters.The skating scenes are professionally choreographed by a former skater who has done choreography for Olympic medalists, which further shows how much heart and soul is put into this anime. Equally important to the animation, is the music used during performances and like the animation, the music is superb and befits the series very well. Similarly, the opening theme is catchy and the visuals give you a taster of the stunning art the series has to offer. Skating sequences are narrated by either a sports commentator or the skaters' internal voices. That way, viewers with limited or no knowledge about figure skating can understand how performances are rated or how difficult the seemingly effortless jumps truly are.

Three episodes in, Yuri!!! On Ice seems to have it all: mesmerizing art, captivating choreography, catchy music, and an interesting cast. The story is fast-paced, exciting, and will have viewers eagerly anticipating what happens next. Hopefully both the art and story will keep the current high standard throughout the rest of the series as we'll follow Yuri through upcoming competitions, developing relationships, and an unavoidable face-off with rivaling Yuri for perhaps more than just the Grand Prix...

You can currently watch Yuri!!! on Ice in streaming form via Crunchyroll