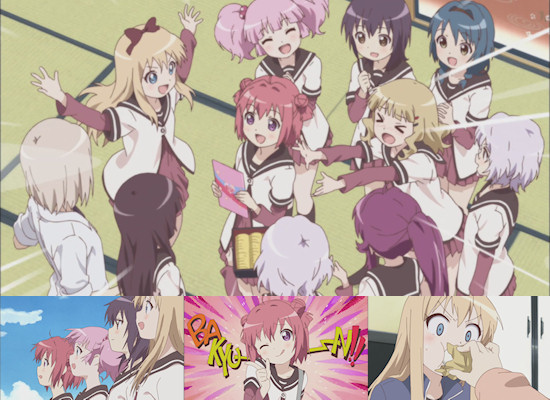 While some series are sure-fire hits that shock nobody as they reel off sequels, second seasons and so on, other anime takes us by surprise from the sheer force of their popularity.  One such recent surprise hit is YuruYuri, a slice of life comedy manga adaptation that didn't exactly set our world alight the first time around, yet it managed to build up enough of a fan base to nab a second season and return to our screens this summer courtesy of Crunchyroll.

Given that success, there's no real motivation to change a wining formula, and thus this second series almost religiously follows the setup of the first - each episode is split, typically into three "sub-stories", all of which are delivered in the name of comedy.  At the centre of it all we still have our group of four friends - the forgettable Akari, the serious Yui who is the object of the girly Chinatsu's infatuation, and Yui's best friend and energetic ditz Kyouko.  Beyond that, we find a number of additional characters, largely made up of members of the school's student council, and as these individuals interact with one another both inside and outside of those groups comedy ensues.  Hopefully.

Although this news will doubtless be welcome to anyone who loved YuruYuri's initial batch of episodes, for the rest of us this means that the series continues to be massively hit and miss.  The show's opening episode gets off to a particularly poor start, only redeeming itself via a delicious magical girl spoof using the show's own Mirakurun insert character.  We then have to endure an utterly bland second episode before the third instalment of the series perhaps gives us a glimpse of what is going wrong simply by shifting its focus slightly - by moving the mainstay of an episode away from the main quartet of characters to focus on Himawari and Sakurako for a while, the show takes in what feels like a breath of fresh air and becomes far more entertaining and even a little touching as a result.  Episode four similarly feels broader in scope in terms of the characters it employs to drive its comedy to continue this slightly refreshing feel.

Admittedly, this isn't enough to raise YuruYuri into a higher echelon of comedy or anything like that at this point - it's still over-reliant on certain character tropes (the "Chitose nosebleed drinking game" is a worthwhile but occasionally dangerous one for the viewer to play), its constant reliance on suggestive all-girl relationships soon gets tiring, and sometimes it's just plain dull to watch as it struggles to derive imaginative comedy from some of its scenarios.  However, the improvement that comes from taking a fresh outlook and focus on some different characters bodes a little better for the series if it continues in that vein - something that I really hope that it does to continue this trend.

Like so many follow-up series, this second season of YuruYuri is squarely aimed at fans of the first season, so I'd highly advising watching that first if you're new to the franchise before tackling these episodes lest you miss most of the recurring jokes and why they are set up as such.  If you are one of those existing fans, you should find everything that you loved first time around here, whereas those of you who didn't see what all the fuss was about last time won't have your mind changed by the episodes on show here.  In other words, it's very much a case of "as you were" for this comedy series.

6
After a weak start, this second season gets into gear by shifting its focus and finding some fresh perspective; this follow-up is still very much suited only to those who really enjoyed the first series.
COMMENT AND DISCUSS
blog comments powered by Disqus