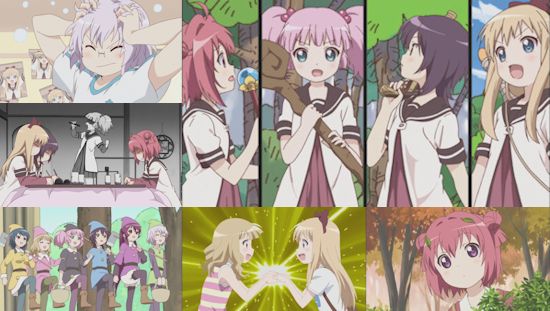 It might have taken me over fifteen episodes to get there, but by the end of my previous review of YuruYuri's second season I was finally beginning to warm to its particular blend of comedy - a change helped to a great extent by a subtle but significant shift in its focus.

That change saw the series spend more time away from its core characters, and more importantly their major character tropes, to divvy its focus more equally amongst the cast while also introducing a handful of newcomers to proceedings - a change which felt like a breath of fresh air against the tired old jokes that were being rolled out time and again by the series at times.

Thankfully, this shift remains in place throughout much of the remainder of this second series, leaving it feeling more imaginative and varied in its output; most importantly of all, it simply feels funnier, even when it reverts to using its main quartet of characters as the thrust of a given story or sketch.

That said (and much like pretty much any comedy series of this ilk), YuruYuri remains an uneven affair - for all of its great and bonkers ideas such as bizarre remakes of Snow White (culminating in the appearance of a crazed, rampaging robot) or Akari travelling back in time in the hope of ensuring she has more of a presence, there are other less remarkable skits and sketches which either fall completely flat or are far less memorable.  The overall feel of these episodes is a positive one however, to make the series as a whole feel far more like a worthwhile watch, particularly in its current streaming format and the naturally lower barrier to entry that it offers.

By this point in time, your feelings on YuruYuri are probably pretty much sit in stone, but if you are one of the few that has been floating uncertainly between loving and loathing the show and what it stands for, then these latter episodes might be the tipping point that wins you over to its side as they were with me - when it gets things right, this second season offers up some well-constructed comedy that appeals to both the fans by leaning on various character tropes, but with the confidence to think outside of this limited box of tricks and do something a little different as well.  The result is inconsistent yet ultimately satisfying, and for a fun and frivolous anime comedy experience that's colourful and cute to boot, YuruYuri has belatedly revealed some true expertise at its craft.

7
Some of the best episodes the series has to offer proves what YuruYuri can achieve in comedy terms when it puts its mind to it.
COMMENT AND DISCUSS
blog comments powered by Disqus